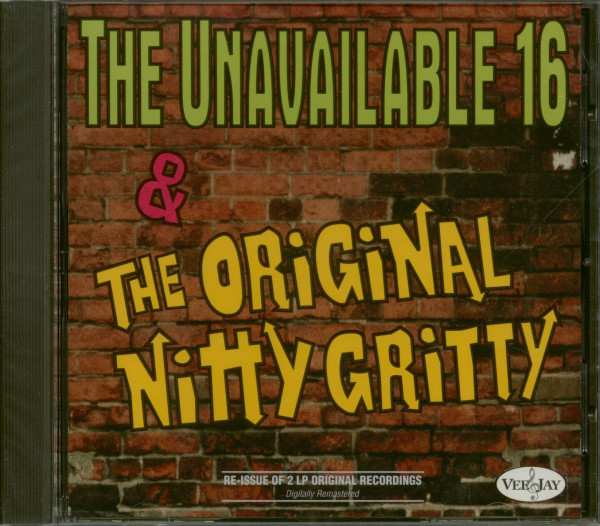 (Vee Jay) 28 tracks (77:00) Digitaly remasterd reissue of 2 incredible rare original 1950s LPs (VJ 1051 + VJ 1084) - superb sound quality!
-
This CD is a reissue of two Tee-Jay albums from 1962 and 1963, respectively, the middle of the first "oldies" revival. Their release was inspired, no doubt, by the success of Art Laboe's Oldies But Goodies series, compilations of leased hits and misses of rock 'n' roll's golden age of several short years previous. The mish mash of clashing styles here shows that the powers behind these albums knew nothing of their audiences tastes and that their choices probably had more to do with which masters were available at the best price than any aesthetic judgement. Why else would they have put obscure doo-wop sides (welcome to those of us without the financial resources to purchase the originals) next to American Bandstand one hit teen wonders?

The Quintones were a four female/one male group from Philly who recorded two records for the local Hunt label. Dick Clark was said to have had an interest in the company. which may account for the massive airplay on his TV show in 1958 as much as the group's similarity to the then-popular Chantels.Harold Dorman's one 1960 hit for the Rita label was later revived in a chart version by Johnny Rivers. Singer/accordionist Tony Bellus's record hit #25 on the N.R.C. label.

Paducah, Kentucky's Ray Smith's lone hit in 1960 was on Sam Phillips's brother Juddy's Judd label. The same year, Rosie Hamlin, raised in Alaska and transplanted to San Diego, wrote her primitive masterpiece of innocence, "Angel Baby." It featured a sax solo so bad it was good. Released on the Highland label, the record is still heard on oldies radio today.
The remaining cuts on Unavailable 16 were vocal group recordings from either Vee-Jay's vaults or from the Chance label, label president Ewart Abner's former employer, plus two cuts by the Orchids leased from Chicago dj Al Benson's Parrot label.

The 5 Echoes are best remembered today for the presence of Johnnie Taylor, who also sang with such gospel groups as the Highway QCs and the post-SamCooke Soul Stirrers before embarking on a successful solo career. Their "Lonely Mood" was on Chance subsidiary Sabre prior to its inclusion here. Also from Chance came these Flamingos and Moonglows sides, two of their pre-fame finest.
Of the Vee-Jay initiated cuts, the Impressions feature a young Curtis Mayfield and the Delegates, a young Dee Clark. The Spaniels' "Red Sails In The Sunset" had not been released before this album. It was subsequently bootlegged for collectors who just had to have it on a single.

Original Nitty Gritty was more of a blues-oriented grouping of material. Jerry Butler and Dee Clark contributed their name value to rock 'n' roll fans, while Rosco Gordon, Pee Wee Crayton and Billy Emerson were for the blues fanatics. I suspect that the inclusion of the remaining rare sides was less an act of generosity towards record collectors than a way of filling up the album with a bunch of stuff laying around collecting dust.

Lee Diamond later was to have his moment as co-writer of Aaron Neville's "Tell It Like It Is" and Harold Burrage's "Crying For My Baby" was later cut in a hit version by Junior Parker.
Burrage was alocal blues singer who had recorded for Decca and Cobra. Eddie Taylor and Earl Phillips played on label mate Jimmy Reed's records. Joe Buckner sang with the band of pianist Tommy Dean and Priscilla Bowman had had a hit on Vee-Jay with Jay McShann, "Hands Off."

The value of these albums today is that more than a few of these songs haven't yet appeared on other compilations to this day and are welcome old friends.
(Billy Vera 1992)