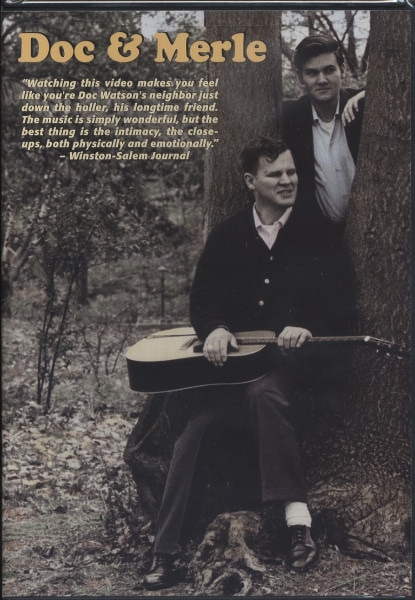 (Vestapol) NTSC, Code 0, English, 85 Min. A mixture of music, interviews and rare film footage.
Doc & Merle reaches deep into the relationship between Doc and Merle Watson. It gives an historical overview of their evolution as musicians and explores the special bond between them and the North Carolina mountains they call home. It presents an entertaining and enlightening look at their lives and their music. During their 21-year career, the Watsons' mastery of guitar and their unique blend of traditional, bluegrass, country and western, blues and gospel music won them an international audience and numerous awards. This documentary is a rich mixture of music, informal interviews, old photographs and rare film footage. The wide range of musical influences the Watsons' embraced is clearly shown through concert footage and less formal at-home picking sessions. Sixteen songs are presented ranging from Black Mountain Rag and Wabash Cannonball to Blue Suede Shoes and Freight Train Blues. Doc is reunited musically with Jack Williams, his partner from the early 1950s, for a rare rockabilly performance of Step It Up And Go. He also performs with Clint Howard and Fred Price playing Fire On The Mountain and Daniel Prayed and with his wife Rosa Lee for a moving rendition of Wandering Boy. This DVD is dedicated to the memory of Merle Watson who died in a tractor accident on October 23rd, 1985.