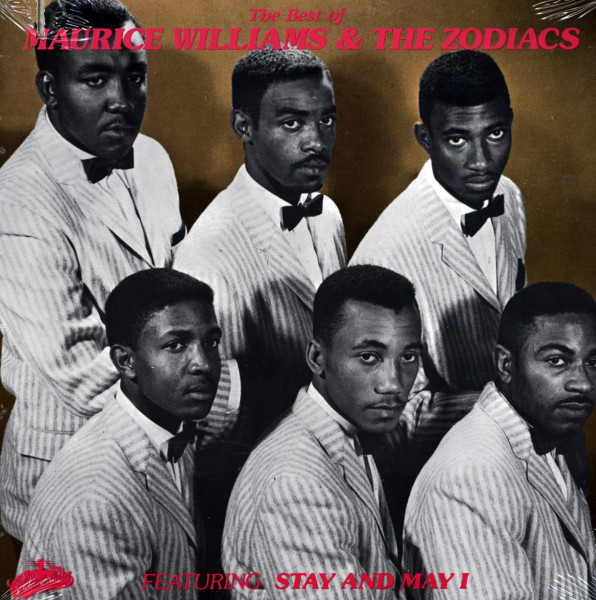 Having scored a 1957 hit with the clattering, Latin-tempoed Little Darlin' while fronting his first group, The Gladiolas (it's on that year's edition of 'Street Corner Symphonies') on Ernie Young's Nashville-based Excello Records, Lancaster, South Carolina-born Maurice Williams made a remarkable 1960 comeback by pacing the pop hit parade with his new group, The Zodiacs. Stay was the shortest song to pace the pop charts at just over a minute-and-a-half, making it all the more compelling.

After three less successful followups, The Gladiolas had exited Excello without their name (Young owned it). Either their manager or a group member suggested renaming the group after a new foreign car, the Zodiac, that billing debuting on a '59 single for the Columbia, S.C.-based Cole logo. Pretty soon, the first incarnation of the group imploded. Williams reorganized The Zodiacs with tenors Henry Gaston and Wiley Bennett and baritone Charles Thomas. Bassist Albert Hill and drummer Little Willie Morrow were added later. Maurice doubled on piano.

Midway through 1960, Williams made some demos for producers Phil Gernhard and Johnny McCullough in a Quonset hut studio. Al Silver of New York's Herald Records snapped the tapes up, including Stay. The bouncy Do You Believe, half of their Herald debut, broke first down South, but the atmospheric Stay quickly overshadowed it, entering the R&B hit parade in late September and rising to #3 (Gaston's soaring falsetto passages were a real ear-grabber). It did even better than that with pop audiences, venturing to the top in late November.

The Zodiacs' next two Herald offerings, I Remember and Come Along (a Stay soundalike) made minor pop chart noise in early '61. But Stay remained the group's calling card, spawning hit covers by The 4 Seasons in 1964 and Jackson Browne in '78. Several more Zodiacs singles emerged on Herald before the group hopped to Atlantic, Scepter, Sphere Sound, Vee-Jay (where in 1965 they introduced the beach music gem May I, revived successfully in '69 by Bill Deal & The Rhondels), and Marshall Sehorn and Allen Toussaint's Deesu logo.