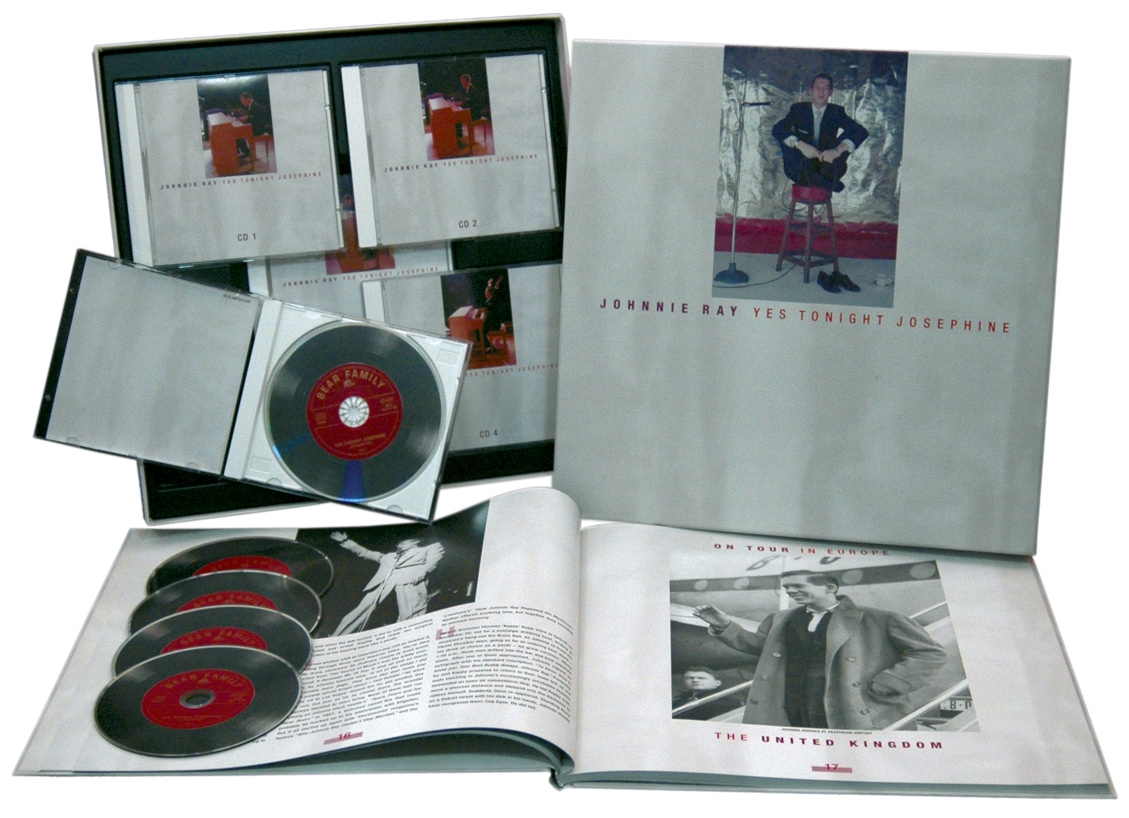 Singer-pianist Johnnie Ray exploded onto the American pop music scene in late 1951 with Cry, a ballad given such an emotional and unorthodox treatment that it stunned the listening public,  and held down both the #1 and (with Ray's self-penned Little White Cloud That Cried as the flip) #2 spots on 'Billboard's' pop chart--a unique achievement. The 24 year old Oregon born Ray matched his unusual vocal approach with a wildly physical performing style that, as label-mate Tony Bennett said, "smashed all the rules." Not surprisingly, Ray had been discovered at a black R&B Mecca, the Flame Showbar in Detroit, where he'd insinuated himself after almost three years of thankless toil in the "upholstered sewers" (as Johnnie himself described them) of Los Angeles and the nightclubs, roadhouses, after-hours clubs and burlesque theaters of the Pacific Northwest.

Unconventional hardly began to describe Johnnie Ray; a hard-drinking, blues- shouting, piano-kicking, bisexual firebrand. Not only did Johnnie, in performance go absolutely ape--throwing himself onto the stage, writhing, gasping, gesturing wildly, wresting the microphone from its stand and racing back and forth with it, leaping from the stage into his audience (antics never before attempted by any performer, black or white), he also wore a hearing aid--the result of a 1940 blanket toss accident when members of his boy scout troupe accidentally dumped him onto the ground; a dry straw punctured the ear drum. The handicap, taken with all the rest of his wild presentation, qualified him as a freak, a big beat mutant who shocked and disturbed staid 1950s America. Barely recalled by the public today, Johnnie Ray was a crucial figure in pop music--the missing link between crooner Sinatra and rock 'n' roll idol Elvis Presley.

During his initial burst of fame, captivating not only the bobby sox set but also Manhattan's Cafe Society and beyond (everyone from Tallulah Bankhead to Salvador Dali to Noel Coward to Yul Brynner to Hank Williams Sr. proclaimed their adoration), Ray's manager Bernie Lang had aggressively capitalized on his property, re-negotiating Johnnie's contract with Okeh and later Columbia no less than three times and launching the first all-out merchandising scheme in pop music history: in 1952, Johnnie Ray bobbysox were selling at the rate of 30, 000 dozen pairs a week. There were Johnnie Ray Teardrop suits, sport shirts, ladies blouses, Cry-kerchiefs, folios, plans for a hand puppet--an endless and lucrative stream of products capitalizing on the Cry Guy's unexpected appeal.

Bernie Lang had good reason to exploit Ray as much as possible--the bottom could drop out any time. Within a week of signing his recording contract in April 1951, Johnnie had been arrested by an undercover vice officer in the mens' room of a Detroit burlesque house; charged with accosting and soliciting, Johnnie plead guilty, paid his fine and blithely went on to become the world's reigning international pop star (riots broke out everytime he toured Britain and Australia--his overseas fans were virtually uncontrollable). Even a high-profile but short-lived marriage to the daughter of legendary Sunset Strip showman Charlie Morrison, owner of the swank Mocambo, could not provide cover. When the debut issue of the notorious scandal magazine 'Confidential' appeared in 1953, Johnnie was on the cover, subject of a vicious character assassination that, almost miraculously, did not refer to the 1951 arrest. But Johnnie had a rogue-ish reputation--he'd also been arrested a number of other times since attaining fame, as a common drunk (passed out in an airport terminal) and a spectacular drunk and disorderly charge (roller skating through the lobby of a Minneapolis hotel, squirting guests with a water pistol). 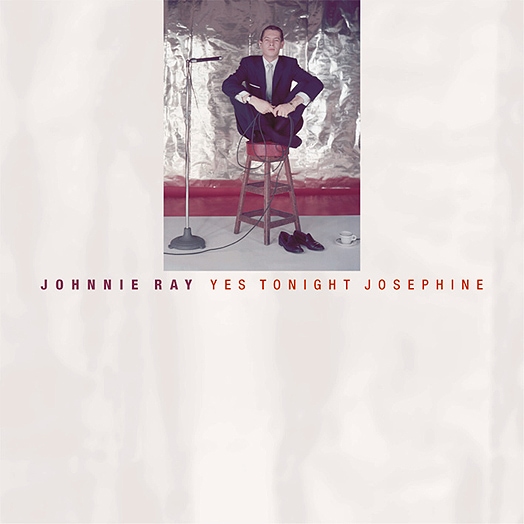 Personally, Johnnie was a odd mixture of rural farmboy, high-camp gay blade, jazz-R&B philosopher and formal old school Tin Pan Alley entertainer. His degree of interest in men and women constantly shifted; after splitting with his wife Marilyn in 1953, he had started an ongoing relationship with a male model that lasted for some 7 or 8 years. But in 1956, male model or no, Johnnie began a torrid affair with 44 year old columnist, crime reporter and radio/television personality Dorothy Kilgallen. A powerful figure and veteran Hearst employee, Kilgallen was as famous as Johnnie; although she was married (with three children) the Ray-Kilgallen affair was one of Gotham's most open secrets. They did not just hide in plain sight, they flaunted it and necked outrageously, pawing each other like a pair of teenagers at tables in most of New York's top clubs. No one dared publicly speak or write of the affair--she was a fearsome adversary whom none would cross.

This was most fortuitous for the Cry Guy, whose career, since 'Confidential's' lurid expose, constantly vacillated between glory and scandal. As a result, Johnnie Ray's cachet was re-established and his romance had coincided with a renewed vigor, depth and skill in many of his records.

Back in the studio on March 17, 1957, Johnnie again plunged into the pop market with the whooping ebullience of Yes Tonight Josephine, the mind- bending overkill of Build Your Love (On A Strong Foundation) and gingerly strolled the dusty, Western-flavored Street of Memories. The next record date, May 26, 1957, produced two more slabs of pure 1950s pop: Miss Me Just a Little, the dizzying, god-awful Texas Tambourine, and Pink Sweater Angel, a weak attempt to rope in the sock hop crowd. But the last tune, Soliloquy Of A Fool, was an extraordinary, if not altogether unique, piece of work; eerie, dramatic, with weird percussion and a ghostly sounding organ. Johnnie's vocal is riveting, a performance of white-knuckled, teeth-grinding intensity.

He was riding so high, coming off his #2 hit, Just Walkin In the Rain, and the Top Ten follow-up You Don't Owe Me A Thing, that Johnnie decided he was going to get himself something really wonderful to celebrate his 31st birthday. He was going to buy back his hearing. Following rounds of consultation, he secretly entered a New York hospital and spent his birthday, January 10, 1958, undergoing surgery. The press was called in the following day. Propped up in bed, with a huge bandage wrapped around his head and a doting doe-eyed nurse melting beside him, Johnnie smiled for the photographers but did not answer any questions. He couldn't have--the operation was a flop. Doctors brainstormed, then suggested an immediate second go at it. Johnnie agreed. He went back for another attempt on January 12.

Two days later, in a special report headlined:"Johnnie Ray Ear Miracle Thrills New York," famed columnist Earl Wilson ballyhooed "the great good news that Johnnie Ray can hear after a second operation has Broadway again believing in miracles." By the second paragraph this cheery tone dwindled to more sober observations like "at least partly a success  it appears he is going to be able to hear." The basis of the story lay in the fact that Johnnie had detected a gust of wind vibrating the window pane next to his bed when Wilson dropped in. Earl was doing him a favor with the miracle angle.

While the first operation was a failure, the second was a disaster. The surgery completely eradicated what little remained of his left ear's hearing and diminished that in his good right ear by almost sixty percent. Happy Birthday.