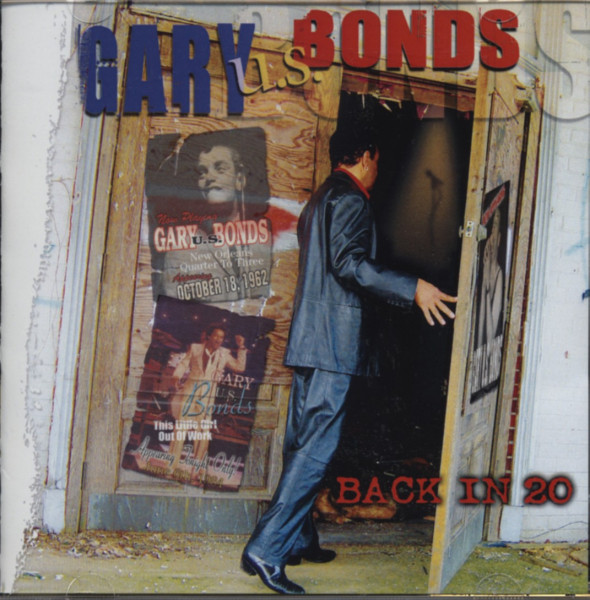 To appreciate just how different this record was, it must be set in context.  When it broke into the charts, the top songs included Poetry In Motion, Are You Lonesome Tonight, A Thousand Stars and Last Date.  This, in contrast, sounded like a tribal chant. Its raw, muddy sound complemented the contagious party atmosphere. The enigma was compounded by the name of the artist. Who was 'U.S. Bonds'? The answer was Gary Anderson, born in Jacksonville, Florida on June 6, 1939. He moved to Norfolk, Virginia with his family in 1941. Norfolk record store owner Frank Guida had the ambition of producing his own records. After a fleeting involvement with the Five Pearls whom he signed to Atlantic, he recorded Tommy Facenda's High School USA, but almost a year passed before Guida tried his hand at production again. In 1959, he bought a local studio nearing bankruptcy. This was the first recording to emerge from the studio, and it was a song that Guida had written with Joe Royster, a shoe salesman at Shulman's department store in Norfolk. Initially, Guida planned to use a singer called Leroy 'Bunchy' Toombs who proved to be too difficult. so he lit upon Gary Anderson.

"Gary would come around the store occasionally," recalled Guida.  "I heard him sing and I thought his voice was kinda thin which is why I fattened it up with echo, but he was a clean cut kid and I tried him on ‘New Orleans.’ The group on that first session was led by [saxophonist] Earl Swanson who I knew from a jazz show I hosted on television. The chord progression came from calypso - not New Orleans. A Rhythm & Blues record it was not."  The production was dominated by a double timed bass drum lick from Emmett 'Nabs' Shields who had played with the Griffin Brothers. It was not, as Guida claims, the first time that such a lick had been used on a pop record, but it was certainly the first time it was as upfront as this. Guida ran the session from the studio floor while Joe Royster ran the board. Gary disliked the song, but couldn’t turn down an opportunity to record. When the record appeared he found that he was 'U.S. Bonds.’ "There was a deli next door to the studio," he recalled to Wayne Jones, "that was very much into promoting U.S. savings bonds.  There were posters, placards and so on.  By Frank going over there for a pastrami sandwich he came up with that." Guida felt that by placing 'Buy U.S. Bonds' on the record, stations would think it was a public service announcement and would play it or at least not reject it out of hand. 'Gary' was added on subsequent pressings. New Orleans was released on the LeGrand label, a name Guida had copped from the French composer Michel Legrand feeling that it connoted royalty. The record broke out of Pittsburgh and charted nationally toward the end of 1960, peaking at #6.

And so this series ends with a record that has the same garage production values as the first song on the first CD, Cecil Gant’s I Wonder, but a vast change had overtaken R&B in the interceding years. From 1963 until 1965, 'Billboard'ceased publishing an R&B chart because, in the opinion of the magazine, pop and R&B were indistinguishable most days. You could plausibly argue that artists like Bobby Bland, Jimmy Reed, etc. did not sound in the least like pop music, but the fact that anyone would even talk of pop and R&B in the same breath is indicative of the extent to which R&B had influenced pop music and vice versa in fifteen years. R&B producers had become very skilled at tailoring their records for pop radio, while white songwriters/producers like Leiber and Stoller (and, before long, Bacharach and David) would find black singers to give voice to their songs and sentiments. Gary U.S. Bonds’ producer, Frank Guida, claims to have thought to himself, “Hey, why don’t the black guys start doing pop.” And they did.

Across the Atlantic, a generation of kids who had never heard Alan Freed or Dr. Jive and had never seen one R&B star much less a caravan of stars would co-opt the music heard on the later volumes of this series. In not quite figuring out how to play it, they created a new music, just as the Jamaicans created ska and rock steady from their faulty understanding of it. Without a doubt, rhythm ‘n’ blues was the most influential music of the post-War era. These were records that made a difference.