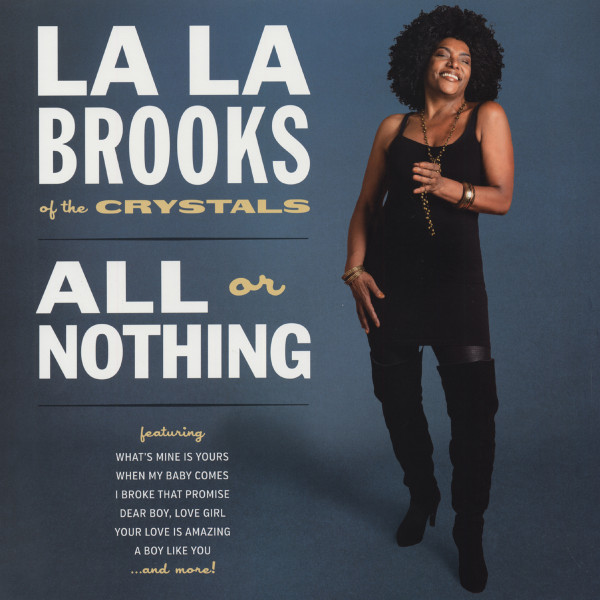 La La Brooks: All Or Nothing

(2014/Norton) 14 tracks
Dolores “La La” Brooks, rose to fame with the Crystals, singing lead (at the age of fourteen) on the group’s Phil Spector-produced smash hits Da Doo Ron Ron and Then He Kissed Me. Brooklyn-born La La celebrates the 50th anniversary of Da Doo Ron Ron with her debut solo album ALL OR NOTHING on Norton Records. La La returned to the studio in fine form, cutting fourteen new recordings, including original material plus covers of the Small Faces, Ohio Untouchables and Mink DeVille. The sessions were produced by Mick Collins (Dirtbombs, Gories) , who also plays guitar on the record.

“The lesson I've learned is to never give up on your dreams no matter what they may be, and that you're never to old to have your best dreams come true. With this album, I first searched for the child who's still within me, with the young voice of the 1960's. Then as we got deeper into recording, I found the voice that came from my struggles, which is the woman's voice as I grew up. Going even deeper, I found a hard rock sound which represents the strength that I have today. I wanted to show you all of my voices, all of me. And that's why this album is called All Or Nothing.”

Artikeleigenschaften von La La Brooks: All Or Nothing