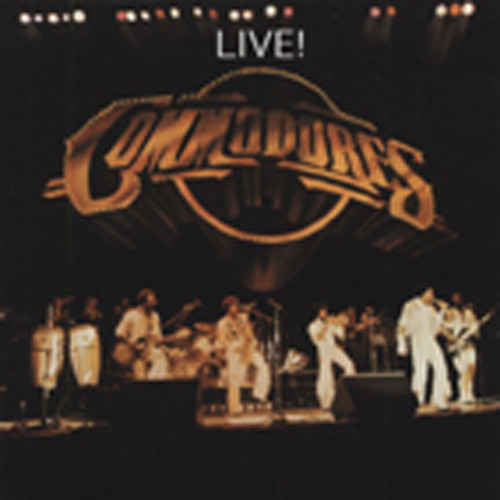 Once Lionel Richie sat down at the piano and exhibited his sensitive side, The Commodores became primarily known for romantic balladry. When they started out, steamy funk was their specialty.

They came together on the campus of Tuskegee Institute, an all-black college in Alabama, as a merger of two local combos. Guitarist Thomas McClary (born October 6, 1949 in Eustis, Florida), Richie (born June 20, 1949 in Tuskegee and then on sax), and trumpeter William ‘WAK’ King (born January 30, 1949 in Birmingham, Ala.) had been with The Mystics, while keyboardist Milan Williams (born March 28, 1948 in Okolona, Mississippi) came in from The Jays. Bassist Michael Gilbert and drummer Andre Callahan completed the ranks. They chose their name when either a blindfolded McClary or King placed his finger on the word ‘commodore’ in a dictionary.

Then Callahan went into the Air Force. The diminutive Walter ‘Clyde’ Orange (born December 10, 1946 in Jacksonville, Florida) was his replacement. “I had my own group called the J-Notes,” says Orange. “I had a full-paid scholarship to go to Alabama State as a percussionist.”  He flew to New York and joined the band. “We definitely did a lot of James Brown stuff,” notes Clyde. “James Brown, Wilson Pickett, we did whoever was hot at the time.” Manager Benny Ashburn brought them to New York during the summers; they played around Tuskegee while attending school. Their debut album was a quick affair. “In two hours’ time, it was cut,” says Clyde. “They turned on the machine and said play.”  Only a single from the session, Rise Up, appeared on Atlantic in 1969. Then Gilbert got drafted. In came Ronald LaPread.

An extended gig opening on a Jackson 5 tour led to big things for The Commodores. “Benny went in and did his job, and got us signed with Motown,” says Orange. At first they inherited everyone’s leftover material, but their promising ’72 MoWest debut The Zoo (The Human Zoo) saw them working with writer/producers Gloria Jones and Pam Sawyer. It didn’t hit. “It was hard for anyone to capture what the Commodores were doing,” says Clyde. “You’d see us in concert, and there was all this energy, but they didn’t know how to harness and capture this energy on record.”

Finally they found someone who knew how, right under Motown’s studio roof. “We would walk in sometimes, and we always saw this young man named James Carmichael,” says Clyde of the busy staff arranger. “We were there to do a session with someone, I’ve forgotten exactly who, and we said, almost at the same time, ‘That is the guy we need!’” After a month in Tuskegee woodshedding with Carmichael, The Commodores were ready. James implored them to write their own material. A funk-soaked instrumental penned by Williams initially titled The Ram caught Berry Gordy’s ear. “He said, ‘“The Ram?” What does that mean?’” recalls the drummer. “’It sounds like machine guns to me!’” The retitled funkfest Machine Gun went to #5 R&B in 1974, followed by the #12 entry I Feel Sanctified before year’s end.

With McClary’s crackling guitar lines keeping the funk red-hot, Slippery When Wet, penned by McClary and Orange, was The Commodores’ first R&B chart-topper in July of ’75, achieving a #19 pop showing. Carmichael supervised its recording at Motown’s L.A. studios (Detroit was by now a distant memory for the label). 1977’s Brick House was another funk juggernaut. But the group’s focus shifted.

“I was the main lead singer at the time. But when it came down to recording, Carmichael didn’t hear my voice. He heard Lionel Richie,” says Orange, “that pop-R&B.” Richie’s country-tinged approach took precedence on Just To Be Close To You (1976), Easy (1977), Three Times A Lady (1978), Sail On, and Still (both 1979), all soft, intimate ballads that he penned and fronted. Richie went solo in a big way with Endless Love, his ‘81 platinum duet with Diana Ross. Motown had itself another superstar whose genre-obliterating music dominated the ‘80s. McClary split too.

The Commodores picked up British-born vocalist J.D. Nicholas and kept right on going on Motown. Nightshift, their heartfelt ’84 tribute to fallen heroes Marvin Gaye and Jackie Wilson, proved yet another R&B chart-topper. Clyde, WAK, and J.D. still have their latest edition of The Commodores on the road.