Cousin Emmy and Her Kinfolks 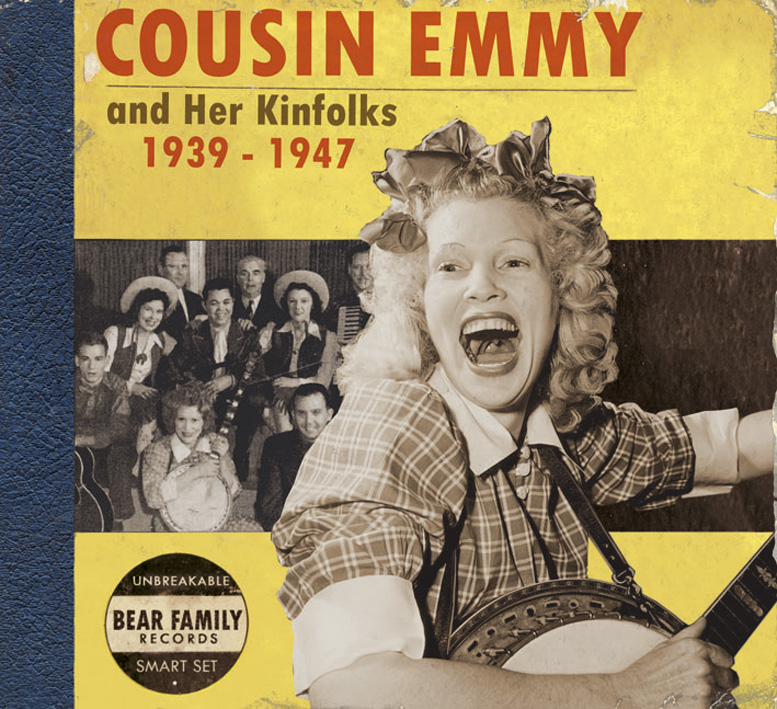 hile one might say that the emerging record business helped to bring country music into existence in the early 1920s, it was the medium of radio that in fact brought the music in its many manifestations into the national limelight in the 1930s. Throughout the 30s, 40s and into the early 1950s, there were scores of hillbilly singers and pickers who managed to make their living – sometimes a very good one – playing radio shows by day and driving long hours in the evenings and on weekends to make personal appearances. While on the air, artists could pitch merchandise such as songbooks and advertise their upcoming personal appearances in the station's listening area, both of which brought in money that supplemented the income from sponsors. Singers and bands usually worked at a particular radio station for a season, or until they had 'played out' the area, and then moved on to new territory. It was a fiercely competitive environment and not a very secure one in which to make a living. It did have its appeal, though. Those who were successful found, that compared to working on the farm or in the factory, the pay was good and the labor not quite so hard.

Out of this milieu came a young woman from Kentucky who called herself Cousin Emmy. One of the more fascinating and enigmatic entertainers of the golden age of early country music radio, Cousin Emmy was a complex and sometimes contradictory individual and performer. As an entertainer, she was somewhat of a show-off – flamboyant, colorful, and sassy – but at the same time, she seemed 'down home' and sincere. She lived to perform, but sometimes would get tired of show business life and go home for several months at a time. She never had any children of her own, but she loved little children and helped to raise some of her nieces and nephews. She had little formal education, but possessed the confidence and expertise to keep a performing troupe together for more than a decade. Indeed, Cousin Emmy was an extremely talented and accomplished, all-around musician who picked the banjo and guitar, played the fiddle, jaw-harp, harmonica, piano, ukulele, musical saw, and even the rubber glove! According to all reports, Cousin Emmy danced and sang her way into the hearts of everyone who ever saw one of her personal appearances or heard her on the radio. In her heyday, she was one of the best-known and most popular performers in country music. Her career spanned several decades, from the mid-1930s all the way through the 1940s and into the early 1950s, with a revival of sorts in the 1960s and into the 1970s. Yet, until recently, she hardly rated a footnote in most of the published histories of country music, and not one of her recordings was available in any format.

Cousin Emmy, whose given name is actually Cynthia May Carver (her family and friends called her May), was born March 14, 1903. By some accounts, her birthplace was in rural Barren County, in south central Kentucky some 18 miles from the nearest railroad in Glasgow, the county seat. Other accounts give her place of birth as Lamb, Kentucky, just over the line in Monroe County. Although Cousin Emmy has often been called a singer of 'mountain songs,' this area of Kentucky where she spent her early childhood sits a good distance west of the Appalachian Mountains. May's parents were William Henry Carver and Molly Bewley Carver, both natives of Barren County. The Carver family counted among them a number of outstanding musicians remembered to this day. Her father Henry was a remarkable fiddler, and both he and her mother, Molly, played the banjo and sang the old-time songs. May's first cousin, Lorenzo Dow Carver, known locally as 'the Blind Carver,' was a well-known fiddler and piano teacher who led a family band made up of his brothers and sometimes their children. His Carver Family Band played all over south central Kentucky and middle Tennessee at county fairs, picnics, and other gatherings. May had three other cousins, Warner, Noble (later known as Uncle Bozo), and Robert Carver, who became some of the first musicians from that part of Kentucky to make records.

In July of 1929, they came to the attention of two men from Paramount Records who happened into a music store in Glasgow looking for musicians to record. As the Carver Boys, they ended up recording eight sides that were released on Paramount and its budget subsidiary label, Broadway. Warner and Noble, calling themselves the Kentucky Briar Hoppers, spent a few years afterwards playing radio stations in the Midwest, notably WDZ in Tuscola, Illinois and WHB in Kansas City, where they appeared regularly for a year. They also worked on radio stations in Council Bluffs, Iowa and Omaha, Nebraska.

Despite the talent exhibited by various family members, music was, at most, a sideline for most of them, including Henry Carver's family. Henry and Molly had seven children – eight, actually, but one died at birth. From oldest to youngest were Pearl, Willie Radford, Hazie, May, Burton, Daniel, and Moss. The family lived in a two-room log cabin, that May told a reporter years later, "had cracks between the walls so big that you could a-throwed a cat betwixt them without tetching a hair."  There were many mouths to feed in that cabin. The Carvers were hard working but poor sharecroppers who managed to eke out a meager living farming corn and tobacco. Times were hard and, as soon as they were big enough, the children worked in the fields along side the adults. This unfortunate necessity did not allow much time for things like school or playing music. May joined the others in the corn and tobacco patches when she was about eight years old. Early on it was apparent that young May was something of a show off, had quite a bit of musical talent, and knew how to use it to her advantage. According to a story she liked to tell years later, her mother would leave her out in the tobacco patch with instructions to finish a row. Instead of getting to work, May would sing, dance, and entertain the other folks in the field, and they, in exchange, would do her share of the work. With her outgoing personality, musical talent, and ability to keep folks entertained, it was almost inevitable that the middle child of Henry and Molly Carver would aspire to a career in show business.

Although the Carvers lived a hardscrabble existence, there was time for music now and then. At home the family often played for their own entertainment. Opportunities occasionally turned up outside of the home, too. As a very young girl, May would tag along with her father and one of her brothers when they went to Tompkinsville to play at the fair or to Glasgow or Burkesville on courthouse day, an event that took place in the county seats once a month. Her father would play the fiddle or banjo and one of her brothers the guitar, while May danced and sang. They received what pay they could by passing the hat. About the same time, May began picking up various instruments around the house and learning to play them, one by one. As she told Mike Seeger in 1974:

"When I was a little girl, my sister went and took guitar lessons. She'd have to go and get her teacher to tune her guitar. Well, I'd run it down everyday when they'd go out in the tobacco patch to work and the corn field. I'd run it down, tune it up. Got to playin' pretty good on it. So my father was a great violinist. I asked him one day, 'Let me play with you.' He said, 'When you get big enough, I will.' I was seven. I said, 'Well, let me try it.' And he did. Then from then on out, I played with my father on all the concerts and things that he went to. And then, I got me a five-string banjer. I learned to play that in two weeks. I haven't learned nothing else on it. Then guitars, mandolins, and French harps. Then one time, my brothers, in hog killin' time … why they saved, maybe I shouldn't say this, but they saved the bladder. And let ‘em dry. So I went out in the barn where they had ‘em a-hangin' up, and I got one down and I played a tune on it. Then from then on out, then I got into show business and I got me a rubber glove."