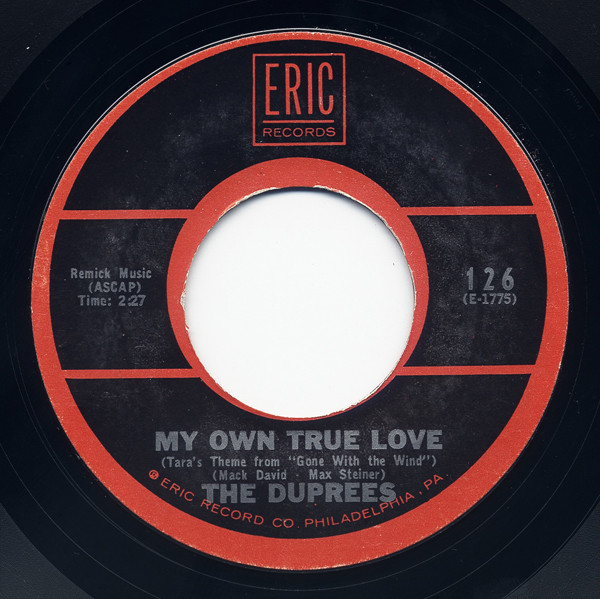 Duprees: My Own True Love - Gone With The Wind 7inch, 45rpm

Artikeleigenschaften von Duprees: My Own True Love - Gone With The Wind 7inch, 45rpm

George Paxton and Marvin Cane's New York-based Coed Records specialized in pop-styled vocal groups. The Crests and Rivieras fell into that category, as did The Duprees from Jersey City, New Jersey. They were lead Joey Canzano, first tenor Joe Santollo, second tenor Mike Arnone, baritone/bass John Salvato, and falsetto Tom Bialoglow. Paxton signed The Parisiens, as they were known, in the spring of 1962. He rechristened them The Duprees prior to issuing their hit debut revival of Jo Stafford's chestnut You Belong To Me late that summer (it's on our previous collection). Take Me As I Am, credited to Canzano and Santollo though it had originally been recorded by The Demens on the Teenage label in 1957, was the flip.

The Duprees' encore My Own True Love came from the epochal 1939 film 'Gone With The Wind,' where it was known as Tara's Theme (it had been a hit for Jimmy Clanton three years earlier). That's not how the group found it. "That was the 'Million Dollar Movie' theme, which was a popular show on television in New York City at that time," says Salvato.It went to #13 pop in late '62. I'd Rather Be Here In Your Arms barely creased the charts early the next year. "It wasn't a favorite of mine, and I don't think anybody else in the group liked it either," says John. "It was kind of a record company idea that they wanted to have us do." Gone With The Wind, a 1937 hit for pop bandleader Horace Heidt, didn't do much better a couple of months later.

Canzano changed his surname to Vann when The Duprees revived Joni James' 1952 pop chart-topper Why Don't You Believe Me, a #37 pop entry that summer. "That's another song that we weren't in love with either," says Salvato. "We collaborated with the arranger of Coed Records, who was putting a lot of different standards so we could pick and choose various songs that we liked, and that would fit the group and fit the harmony." Joni's repertoire came in handy again when The Duprees revived her '53 hit Have You Heard, a #18 pop seller in the autumn of '63.

"We liked the old standards. We liked some of those tunes, and we wanted to be different than all the other groups that were out at that point, and with our own identity," says Salvato. "So we thought that standards would be a good way to go." Losing Bialoglow proved no obstacle. "We had the vocal ability to be able to carry it with just what we had, and we thought that would be the wisest thing to do," says John. (It's No) Sin, a '51 pop chart-topper for bandleader Eddy Howard, did some business for The Duprees in early 1964. Joey Vann, as Canzano was by then billed, left before year's end to go solo. He was replaced by Mike Kelly, the group updating its sound to mildly hit in mid-'65 on Columbia with Around The Corner.

Philly producer Jerry Ross took up the reins, producing The Duprees for his Heritage label. "I enjoyed working with that kind of harmony," says Ross. Hits proved scarce until Heritage camouflaged the group under the handle of The Italian Asphalt & Pavement Company; their Check Yourself was a minor 1970 hit. Canzano died February 28, 1984; Santollo suffered a fatal heart attack June 4, 1981; Arnone passed in October of 2005, and Kelly died August 8, 2012.