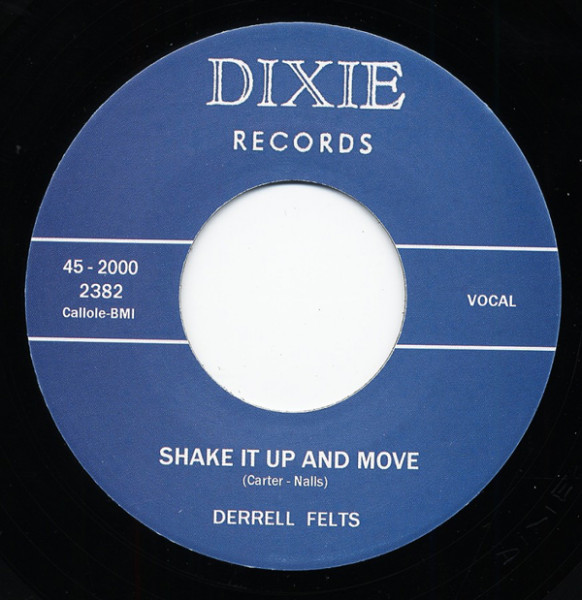 Derrell Felts: Shake It Up And Move - Too Much Lovin' 7inch

Artikeleigenschaften von Derrell Felts: Shake It Up And Move - Too Much Lovin' 7inch

Derrell Felts' adventures in the record business didn't yield any hits, but for many years collectors were shelling out large amounts for the two singles he released during the 1950s. Originally from east Texas, Derrell accompanied his buddy Don Carter to Jack Rhodes' home studio in 1956 and cut some demos there that surfaced recently on an Ace CD. After that, Felts took himself to Nashville where he hooked up with Don Pierce at Starday Records. Pierce had a custom label, Dixie, and offered Felts a chance to be on the label if Felts would agree to buy 700 copies of the record. Felts agreed and his first record appeared in late 1958.

He took copies around to radio stations, but Pierce just barely distributed the record, and, as a result, it just barely counted as a debut. Next, Felts went to Norman Petty's studio in Clovis, New Mexico. This was early 1959, and he found Petty in search of another Buddy Holly, and for a few weeks or months Derrell was it. Petty recruited the Crickets to play on Derrell's record and Petty's wife, Vi, played piano. Felts requested that the Crickets receive label credit, but Petty placed the masters with Columbia and the Crickets were still on Brunswick, so their participation remained anonymous.

It's A Great Big Day appeared in May 1959. Derrell was invited to a Columbia sales conference in Florida, but otherwise had little direct involvement with the label.

He continued recording, but mostly for his own labels, and continued entertaining (he had a television show from 1972-1980 sponsored by his furniture store).