The Five Keys and The Nitecaps

The Best Of DooWop Classics 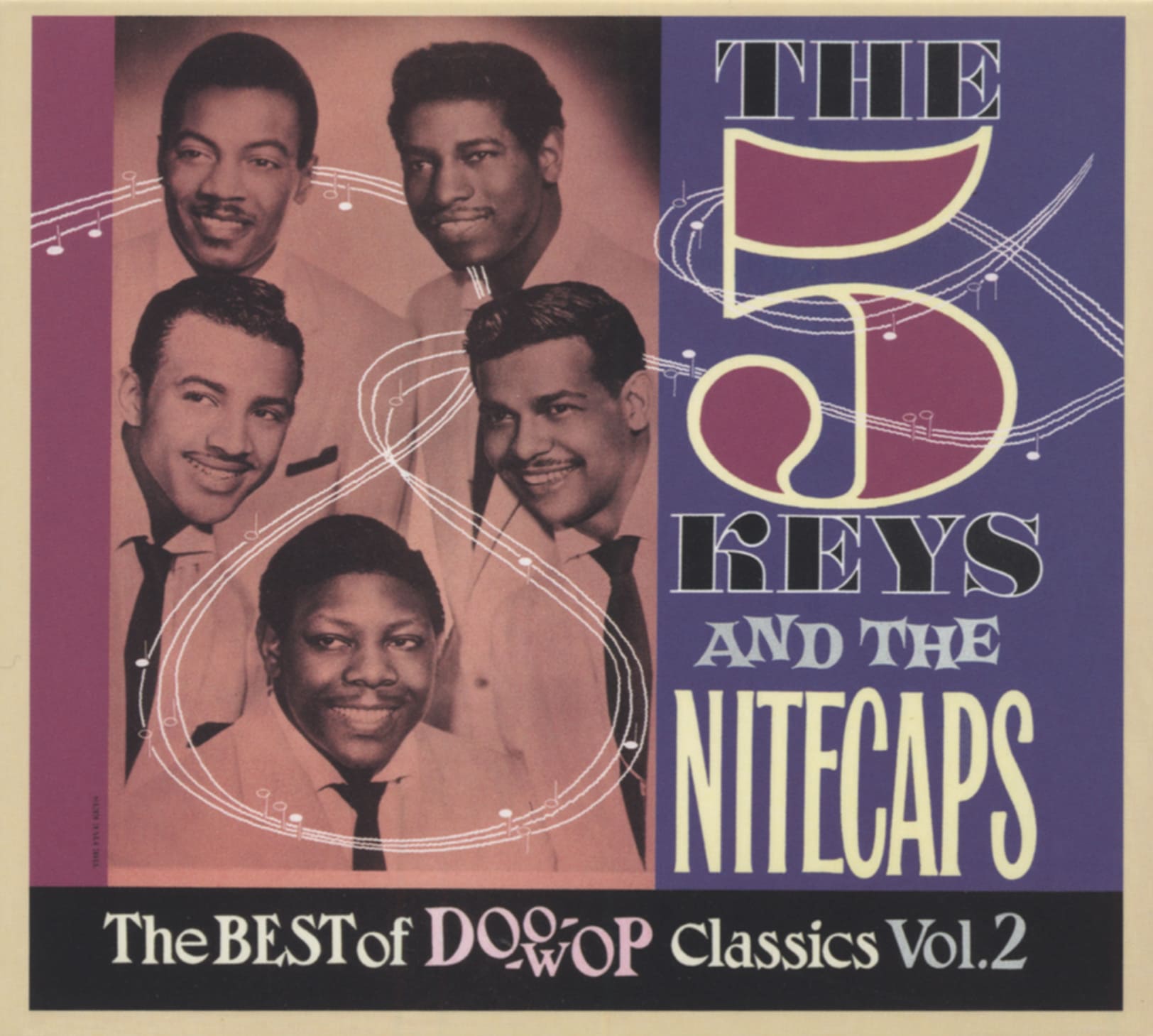 Here it is!! The long awaited unissued FIVE KEYS session recorded in 1954 for RCA Groove just prior to their signing to Capitol. Four takes issued for the first time, this session represents the group at the top of their powers - just before they turned commercial. THE NITECAPS may not have been so famous, but they certainly made a string of fabulous recordings for Groove. Here are eight of their best singles along with three great unissued songs.

The two groups featured here are undoubtedly gems of their kind. Originating from different regions of the USA, they both possess their own sound. As The Five Keys prepared the way to the pop charts along with their colleagues, The Orioles, The Crows, The Chords, The Charms and The Penguins, The Nitecaps did not even reach the national R&B hitlist — but this is certainly not a measure of their talent.

Let us start in Detroit, Motor City, USA, with the almost unknown NITECAPS. In the pre-Motown years, the town’s favorite R&B performer was John Lee Hooker. Jackie Wilson, as one of Billy Ward’s Dominoes, was soon one of the main attractions of the city, before becoming a star himself. With Chicago only two hundred miles away, heavy inﬂuences existed via the Chess and Vee-Jay companies with groups like The Moonglows, Flamingos, El Dorados and Spaniels. The ﬁrst Detroit based with important vocal group output was Fortune Records with The Diablos and The Don Juans in 1954. The Royal Jokers and later The Falcons were other groups emerging from Detroit.

Although scant facts are available on The Nitecaps and more than one line-up has been offered, the most likely components were the three Hamilton brothers: Eugene 'Ronnie’ (lead), Bob and Al (born 1938), along with Freddy Price. One thing The Nitecaps and The Diablos had in common was the sound which owed much to The Dominoes and the early Drifters. They tried to sound more pop-orientated and 'modern' especially with the jump tunes from their ﬁrst November 1955 session for Groove. A Kiss And A Vow resembles The Orioles' ballad style, most likely because of Ronnie’s tenor voice that had the same high soulful feeling as Clyde MacPhatter’s. With Snap, Crackle And Pop and Your’re Gonna Be Sorry from their second session (both issued here for the ﬁrst time, together with takes different from the ﬁnal master), they gave us two distinctive jump tunes of the same musical quality. If you listen very close to the vocal background on Snap, Crackle And Pop, you can hear the group singing the sort of nonsense syllables 'doo-Wop', which later gave this music it's name. Bamboo Rock And Roll from their third single ﬁts exactly into the Ling Ting Tong theme popular two years before, while You May Not Know is a ballad par excellence.

The sound of the third and last session did not change much towards songs popular at the fall of 1956, like See-Saw, Stranded In The Jungle or Love, Love, Love, but goes back to music popular two years before. In Each Corner Of My Heart delights much the same way as some Dominoes’ releases, with a heavy bass break and a high tenor. If you love the sound of Clyde McPhatter, you will also like Let Me Know Tonight, because this is one of the two songs which recall some early Drifters’ work. An almost exact replica of Honey Love by the Drifters is presented here for the ﬁrst time with Oh, You Sweet Girl, that probably has stayed in the can for this reason. (Another group who released a spinoff of Honey Love were the Larks with their late 1954 recording of Honey From The Bee on Apollo.) On the fourth song from this session they backed Varetta Dillard (not included here).

From all the four fantastic releases on Groove, only two (A Kiss And A Vow and Bamboo Rock And Roll) entered a fen local charts. Nevertheless, the NITECAPS must have been popular for some time, because Otis Williams (of Detroit’s Temptations) remembered having seen them live. "... when I started going to the rock 'n’ roll shows at the Fox Theater. For 98 cents or a dollar, you saw an amazing lineup ... There were times I got so caught up in listening to LaVern Baker, The Royal Jokers, Chuck Berry, The Nightcaps" [as they were sometimes billed], Frankie Lymon and the Teenagers, ... that my uncle would have to come ... looking for me." As you see, being part of the concert audience of some ﬁfties' package tours must have been a thrilling experience. Of the Hamilton brothers, Al is well known to soul music fans as Al kent, a name under that he entered both the R&B and pop charts with You Gotta Pay The Price on Ric Tic in 1967. When The NITECAPS broke up, he went to New York with his brother Ronnie to study music. He returned to Detroit in 1961, and then started working for Golden World Records. Later he dealt with a lot of artists on the Ric Tic and Westbound labels and also wrote for Edwin Starr and Jackie Wilson. Ronnie, who sometimes appeared under the pseudonym of Ronnie Savoy, had later success with MGM Records, before he produced Ben E. King.

The FIVE KEYS’ session for RCA’s Groove subsidiary is quite a different story, but as so much has been written about the group, we restrict ourselves to the main facts.

Originating in Virginia as early as 1946, the FIVE KEYS managed to secure their popularity with hits for Capitol up until the late ﬁfties. They recorded in New York, Los Angeles and Cincinatti ﬁrst for Aladdin, then for Capitol and King Records. Formed as the Sentimental Four, they consisted of Rudy & Bernie West and Raphael & Ripley Ingram. When Dickie Smith, a cousin of the Harptones' Willie Winﬁeld, joined them, it led to their new name. Before their ﬁrst record in early 1951, Maryland Pierce (from The Avalons) had replaced Raphael Ingram. Formed in the mould of the popular Orioles, their ballad patterns were similar until the FIVE KEYS hit with Glory Of Love. This led to more pop standards and a few uptempo tunes thrown in. Rudy West was drafted from I952 until 1955, and was released by Ulysses S. Hicks until his death in late I954. Ramon Loper stayed in for Dickie Smith from 1953 until early 1955, when Dickie returned from the service.

Having recorded in RCA’s New York studios for years, they obtained a contract with Groove Records through the efforts of their manager, Sol Richﬁeld. One session in July 1954 resulted, with four songs being recorded. Meanwhile, it appears that their manager obtained a better deal with Capitol Records behind the scenes, as Ling Ting Tong was replaced on this label in September. It also became the ﬁrst hit for the company by the FIVE KEYS with many to follow until 1959...