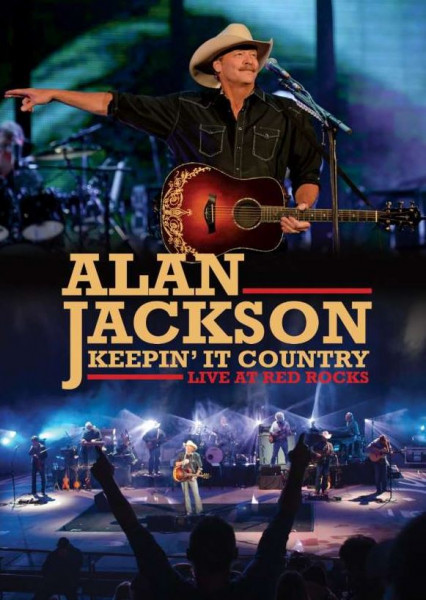 (Eagle) NTSC, Code 0, 106 Mins., Dolby Digital 2.0/DSS 5.1/DTS Sourround, 16:9. Alan Jackson -'Keepin' It Country - Live At Red Rocks' Join Alan Jackson at a capacity crowd at the famed Red Rocks Amphitheater in Denver, CO for his 25thAnniversary KEEPIN' IT COUNTRY TOUR. This concert DVD will be a memorable celebration for his longtime fans, as well as legions of new fans, who are discovering his music through the many songs that have withstood the test of time and influenced many new artists of today. Fans will hear the songs they love from the man who wrote them and made them famous including “Gone Country,” “Good Time,” “Chattahoochee,” “Where Were You (When The World Stopped Turning),” “Remember When,” “Where I Come From,” “It’s Five O’Clock Somewhere,” as well as songs from his 15th studio album, Angels and Alcohol.

The Newnan, Georgia native has sold nearly 60 million albums and released more than 60 singles with 50 landing in the top ten and 35 soaring all the way to No. 1. A member of the Nashville Songwriters Hall of Fame and the Grand Ole Opry, Jackson has won more than 150 industry awards, including 18 Academy of Country Music Awards, 16 Country Music Association Awards, two Grammys and ASCAP’s Founders and Golden Note Awards. He also received the first-ever ASCAP Heritage Award in 2014 having earned the title of most performed country music songwriter-artist of ASCAP’s first 100 years.