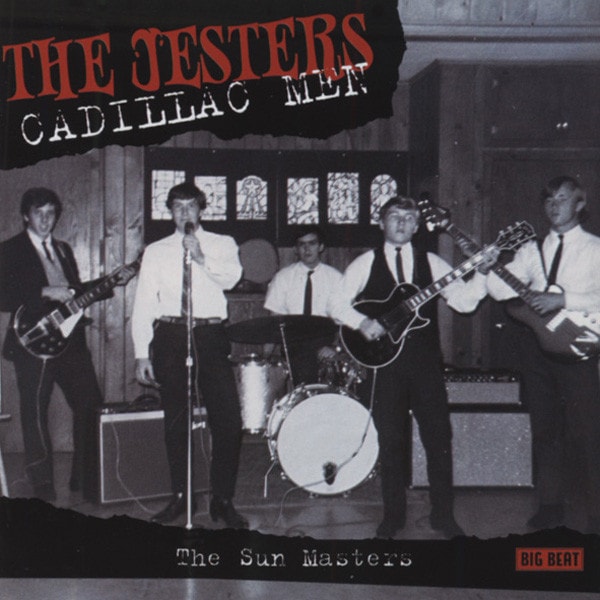 (2008/BIG BEAT) 18 tracks 1965/66 with 12 page booklet of rare photos , label shots and the whole story; The Jester's Crazed Mid-60s Recordings Are The Ultimate In Deranged Genius. Dig Them All Here, Alongside 1966 Cuts From Related Memphis Garage Band The Escapades.

Like their labelmates The Paragons, The Jesters epitomized New York street corner doo-wop at its no-frills finest - no lush instrumentation, just youthful vocal harmonies and high pitched leads on a ballad-dominated diet. Their personnel had changed substantially since we last checked in with the Harlem quintet on our 1957 edition of 'Street Corner Symphonies.'

High tenor lead Adam Jackson was still on board, as was second tenor Jimmy Smith. But lead tenor Lenny McKay, baritone Leo Vincent, and bass Noel Grant all hit the bricks shortly after Paul Winley released their I Laughed b/w Now That You're Gone on his Winley imprint in mid-1958. The group's debut ballad, So Strange (no relation to The Five Dollars tune), came out a little over a year before The Jesters splintered.

Jackson and Smith recruited baritone Charles Lewis and his bass-singing brother Donald and eventually returned to Winley, buoyed by the 1959 release of the classic 'The Paragons Meet The Jesters' LP on Jerry Blaine's Jay-Gee label. For the new Jesters' comeback single in the spring of 1960, they competently tackled The Diablos' immortal ballad The Wind, which they'd recorded for Fortune in Detroit.

Since we included the original classic on our 1954 disc, we opt here for the flip side of that Jesters' single, the effervescent Sally Green. Its authorship was credited to Winley, its co-producer with keyboardist Dave 'Baby' Cortez (who'd worked with The Jesters in the studio since the beginning). The instrumentation is minimal; a biting guitar takes a brief solo, but it's Jackson's lead and the quartet's harmonies that make the record go.

The world really didn't need a doo-wop rendition of Little Richard's classic Tutti Frutti with squeaky strings, but that's what The Jesters offered on their next release later that year, yoked to That's How It Goes. They finished their Winley stint in 1961 with Adam rocking down in Uncle Henry's Basement (Smith led the other side, Come Let Me Show You). Jackson died in February of 1994.