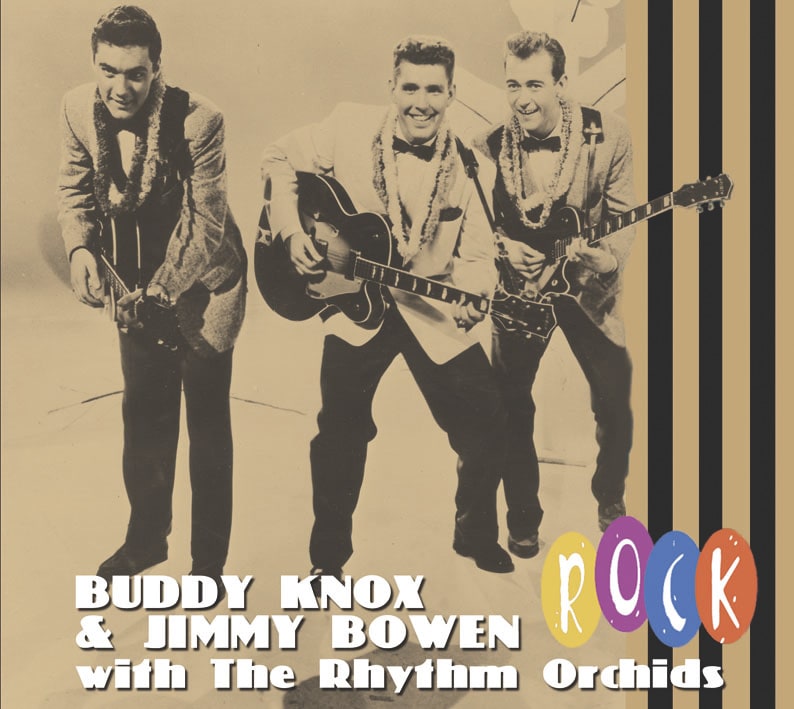 Following their national emergence in 1957, the achievements of two small town Texas boys would shake the music world for decades to come. Still remembered for the enduring classic Party Doll, Buddy Knox was the first rockabilly singer-songwriter to score a number one pop hit, and enjoyed stronger follow up success than many of his peers. Jimmy Bowen, whose Roulette waxing of I'm Stickin' With You was a solid Top-20 hit, later produced major smash hits by Dean Martin, Frank Sinatra, Mel Tillis, Reba McEntire, and George Strait. In the process, he revolutionized (some say ruined) the Nashville sound.

They began their careers together in the Rhythm Orchids, a freewheeling quintet that rose from college fraternity parties to national prominence in a very short time. This is the story of the sounds these historically important figures created during those early days.

Buddy Wayne Knox was born at 4:05am to Henry Lester and Gladys Pearl Knox on July 20, 1933. Raised on a wheat farm in the Texas panhandle town of Happy, Texas – 'The town without a frown' - its population was 576 when their most famous resident was born. Today it still hasn't risen past 700. Knox's father worked hard to put Buddy and his sister Verdi through college, and hoped his son would pursue a career as an accountant. However, young Knox enjoyed playing his guitar and would often sing folk songs with friends Dean Kelley and Allen Greer in the girls' dormitories at West Texas State University. Eventually, they dubbed themselves The Serenaders.

James Albert Bowen was born in Santa Rita, New Mexico to Asa and Stella Bowen on November 30, 1937. He was later raised in Dumas, Texas, which claims fewer than 10,000 residents. Living through the transition years of pop and early rock, Bowen remembers digging Bill Haley's Rock Around the Clock, but his greatest early inspiration came on October 13, 1955 at the Municipal Auditorium in Amarillo. After personally witnessing the sexually charged rockabilly sounds of Elvis Presley Bowen thought, "Now here's a way to get the girls. And make a living. Wow!"

By virtue of his basketball scholarship, Bowen began attending West Texas State with his childhood friend Donnie Lanier. Another sport scholarship beneficiary, Lanier had been nicknamed Dirt after a soot-covered school janitor who had been nicknamed, Dirty McCool. In his autobiography, Bowen recalls, "Don showed up to school after working on his car, he was nicknamed 'Dirt'."

According to Knox, it was Lanier who brought them all together. "Donnie Lanier came in from Dumas, Texas and I found out he was a guitar player," he recalled in a 1998 interview with the author. "He and I would get together in the dorm, just pick and sing and raise hell. Then the next year Jimmy Bowen came in. Jimmy grew up with Donnie, so they were friends."

"Donnie Mills came in the next year. He was a drummer and they had been playing some with him in Dumas," continued Knox. "So all of a sudden we all got together at West Texas State University and put a band together. We didn't have a name for it [the group] but we all had orchid colored shirts, so we called ourselves the Orchids."

The Orchids refined their sound at college parties and local dances and were looking to make a recording. In 1956, they went to see a local group called The Teen Kings. Featuring future superstar Roy Orbison, the group had just recorded Ooby Dooby for the Je-Wel label. After the concert, Knox and Bowen asked a member of the group where they had recorded the song. They mentioned a little studio at 1313 West Seventh in Clovis, New Mexico, run by musician/producer Norman Petty, who had recently sold a half million copies of his recording of Mood Indigo.

A few weeks later, the Orchids met up with Norman Petty, who recorded only a few acoustic demos before sending the boys home. Knox recalled: "We went over to Clovis not knowing anything at all about recording or how to do it or what to do and Norman Petty spotted that right off the bat and it broke him up. He was gonna take our money anyways, right?" However, Petty saw promise in the young band and called them back to record with his drummer Dave Alldred. Back in the studio, they decided to record Party Doll and I'm Stickin' With You.

"I wrote that thing back in 1947 when I was  just a kid on a wheat farm in Texas," Knox said of his most famous hit. "We both sang in the band, but we actually went in to record Jimmy, he was a pretty fair singer and he was a nice looking dude. I sort of wanted to record 'Party Doll' but I thought Jimmy sounded better on it. But after Norman heard me run through it, he suggested I record it. But really we went there to record." Jimmy Bowen concurs, adding: "We got along fine and, probably because he was a better singer, Buddy and I were never competitive."

Recording Party Doll took eight hours. "I bet we did 'Party Doll' 57 times before we got it right," Knox told 'Accent West.' "He [Norman Petty] had needed eight hours to get a two minute and two second A-side out of four half-ass musicians," adds Bowen. Besides Lanier's jangly Tex-Mex lead guitar solo, the record's most distinctive sound came from Dave Alldred's slap-back drum. "My drum was a paper box stuffed with cotton," Alldred told the 'TV Radio Mirror'in August of 1957. "We heard that a major record company later put drummers to work for a week trying to find how we made that sound."