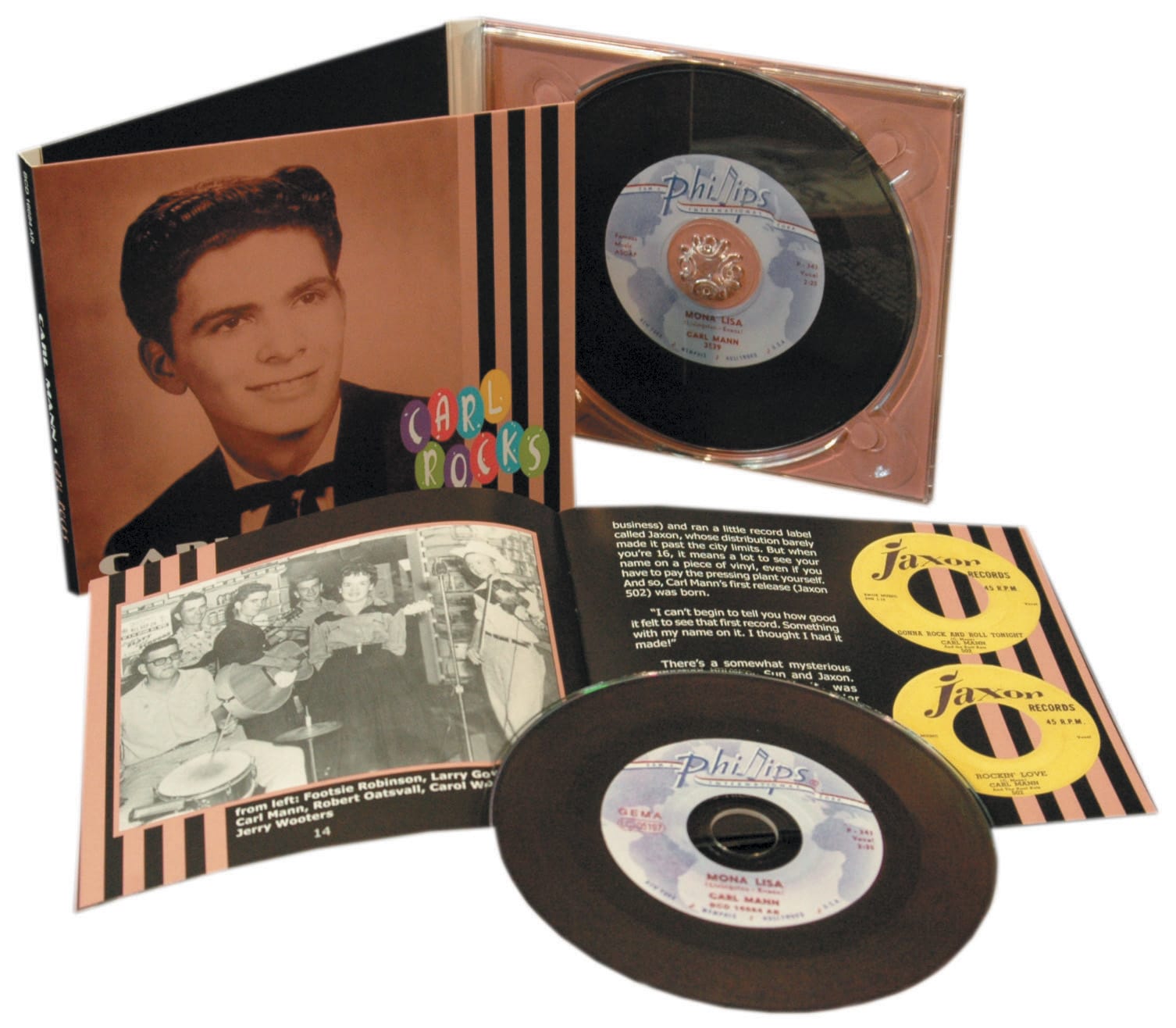 Unlike the classic rockabilly stars of Sun's Golden era, Carl Mann was a kid when he first set foot in that legendary studio at 706 Union Avenue. Elvis? He was just six months shy of his 20th birthday. Johnny Cash? An old man pushing 23. Carl Perkins? The same ancient age as Cash. Roy Orbison? A cool 20. Jerry Lee? He had just had his 21st birthday. Charlie Rich? In his 26th year. All old men. Geezers. It's a wonder they could open their guitar cases or make it to the piano without assistance. At least, compared to Carl Mann. Mann was just over 16.

Now don't get us wrong. Rock 'n' roll was supposed to be young people's music. The further away the adults stayed, the more legitimate the music sounded. Just ask Frankie Lymon and Paul Anka. Lymon was barely 13 when he and his pals from the Bronx recorded Why Do Fools Fall In Love. And Anka was no older than Carl Mann when Diana hit the charts in 1957. In fact, they were just the same age as teen idol Fabian when he scored with Turn Me Loose in early 1959.

So what's the big deal about age? Who said 16 is too young to make records? The answer can be summarized in two words: Sun Records. Sun and Sam Phillips worked differently than the rest of the industry. Or at least the part of it that was self-consciously concerned with marketing teen idols. There's two separate parts to that observation. Recording artists were becoming younger as companies strove to match the age of their artists to the age of the audience buying their records. Then there's the 'marketing' part. It hadn't happened yet, but within several years the record industry would see the era of the 'Bobbys' – best remembered today for their palatable whitebread music and squeaky-clean good looks. If the Bobbys could sing – which was debatable in the case of someone like Fabian, then so much the better. The important thing was these guys would look well-groomed and pretty on television and on picture sleeve 45s. The Bobbys were manufactured for success, a forerunner of what is today referred to as 'inauthentic' music. This has come to refer to an endless stream of fourteen-year old singers or Boy Bands on major labels, whose appearance, wardrobe and music are first tested on focus groups and then saturation-marketed like any commodity to children by multi-national corporations. Arguably, much of this movement away from 'authentic music' (that Sun used to specialize in) began with or had its most conspicuous roots in the Bobby era nearly 50 years earlier. Spend an afternoon in a record store in a middle-American mall and you'll see and hear the direct descendants of the Bobbys, two generations removed.

In any case, the point is simply that, relative to Sun Records, Carl Mann was a young artist. Maybe not young in comparison to what was happening in the industry at large, but certainly young by Sam and Sun standards. In fact, it's possible that other than the dreaded Sherry Crane, Maggie Sue Wimberly or later artists like Tony Rossine (Sun 349) and Ira Lichterman  (Sun 351), nobody younger than Carl ever appeared on a Sun or Phillips International label. Sun had been a front-runner in hybridizing country and R&B, but they were admirably behind the pack in adapting to the teenage demands of the marketplace. With Dion singing Teenager In Love, Ricky Nelson singing A Teenager's Romance, it was clear who was keeping the cash registers ringing.

This was not the way Sam Phillips did business in his little Memphis-based empire – at least not around the time that Carl Mann first came to town. There was no search for marginally-talented pretty boys. When you walked into Sun for an audition, it helped if you were holding some kind of musical instrument. It didn't hurt if you also wrote your own material. Sam (or one of his honchos like Jack Clement) would be listening to you more than looking at your pretty face. They wanted something different. Unique. It's unlikely someone like Fabian Forte would have gotten through the front door at 706 Union Avenue. And most of the Bobbys could also have stayed home. 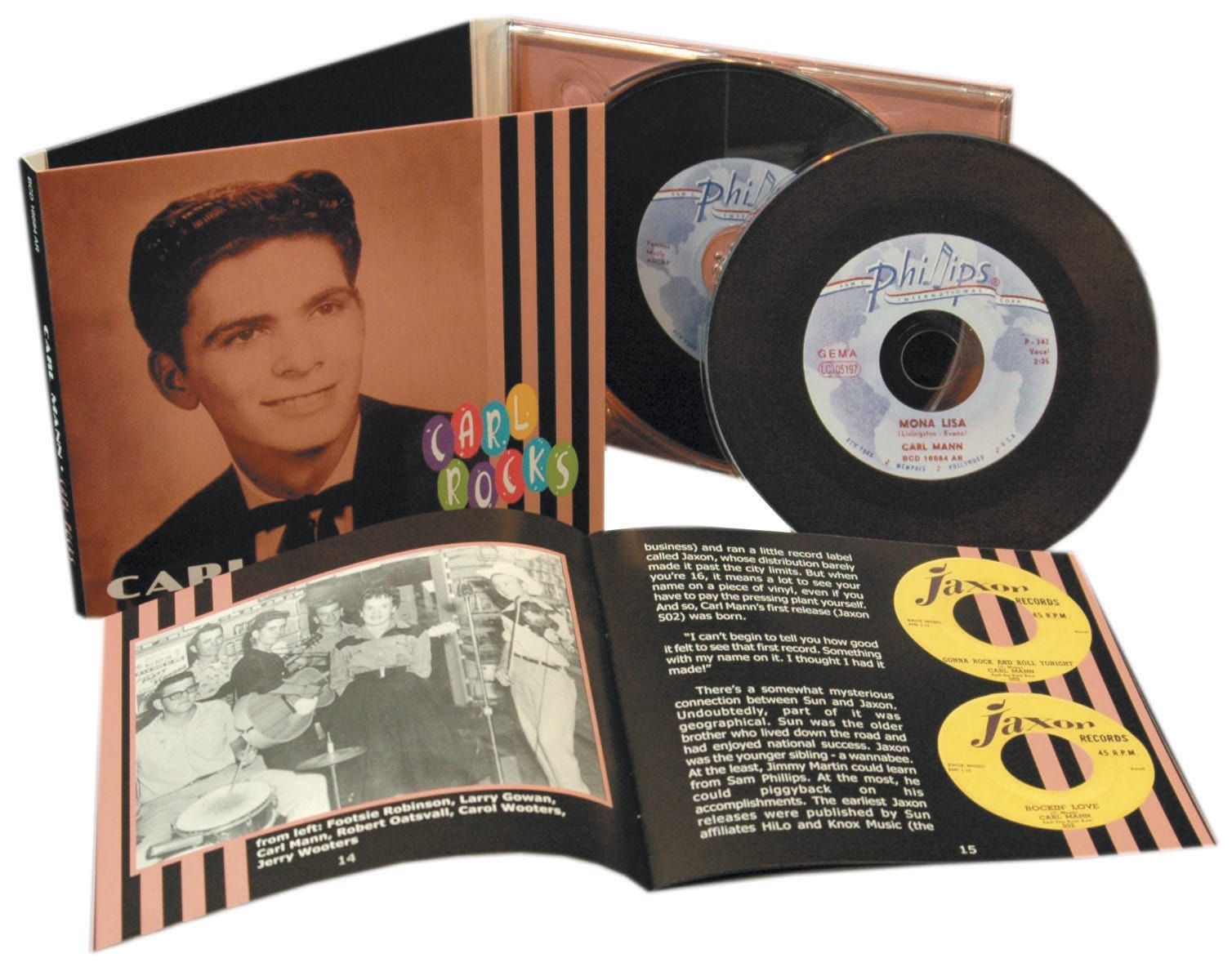 Those were the standards against which Carl Mann should be evaluated. Relative to the norms for Sun Records, Carl was indeed a kid. It's true he was a good-looking kid, but it was his unusual arrangement of Mona Lisa that got him a second look and listen. He was signed not because he was 16 and good-looking, but in spite of it. It sure didn't hurt that he could play a little guitar and piano and could also write songs. And, as we'll see in just a moment, he also walked into the studio with a couple of mighty fine sidemen.

So, yes. It's worth pointing out that 16 was mighty young by Sun Records standards. Those age differences may seem trivial today after a half-century, but back in the '50s they meant a lot. The seven years between Carl Mann and Cash or Perkins, or five years between Mann and the Killer from Ferriday – those were chasms, filled with life experience and musical development. Most of those Sun artists had it and Carl Mann didn't. At least, not yet. It was the kind of experience on which you could build confidence and bravado. Just keep that in mind when you're listening to the earliest music on this disc. Those recordings were made by a kid. True, he's a southern kid, and he was in the right place at the right time. But first and foremost, he was a kid. It's amazing he was as inspired and confident.

Clean Up Your Act

One of the ironies of the era of Bobbys (Vee, Vinton, Rydell and others) is that their emergence was indirectly triggered by what Sun Records had done so well just a few years earlier. It was those hip-swivelling, sneering, threatening rockabillies – guys like Presley and Jerry Lee and Gene Vincent – who had sent shock waves rippling through polite 1950s culture. Radio stations were under pressure and they were more than happy to pass that pressure along to the record companies. Quit scaring the audience! Clean up your act! Record some clean-cut looking kids. Take away the menace! Sweeten the recordings! Add some strings and voices and do something about those raw, stinging guitar solos. The message was clear: You want your records played? You want your records bought? Then tone them down.

It's true, this didn't happen overnight. And the impact wasn't total. There would always be exceptions, but by the 1960s it was easier to get your records played and sold if they went easy on the 'wildness' and emphasized the 'sweet side.' At The Hop, Get A Job and Tequila had given rise to Smoke Gets In Your Eyes, Come Softly To Me and Teen Angel. Brenda Lee had gone from Sweet Nothin's to I'm Sorry. Even Ray Charles went from What'd I Say to Georgia On My Mind. It just made good commercial sense.

It was into this musical world that Carl Mann stepped in 1959 when he set foot into 706 Union Avenue. Had he arrived three years earlier, things would undoubtedly have been different. But by the time Mann stepped up to the microphone, the Gene Lowery Singers – Sun's answer to the sweetening sweepstakes - were a regular part of the label's productions.

Violins and voices weren't the only path to making commercial recordings in the changing marketplace. Another way to calm things down and appease an older and possibly more conservative audience was to re-record songs that were already familiar to them. The songs may have sounded new to teenagers, but those older melodies and lyrics would bring nods of recognition and approval from their parents and aunts and uncles. In some cases, even their grandparents would tap their feet.