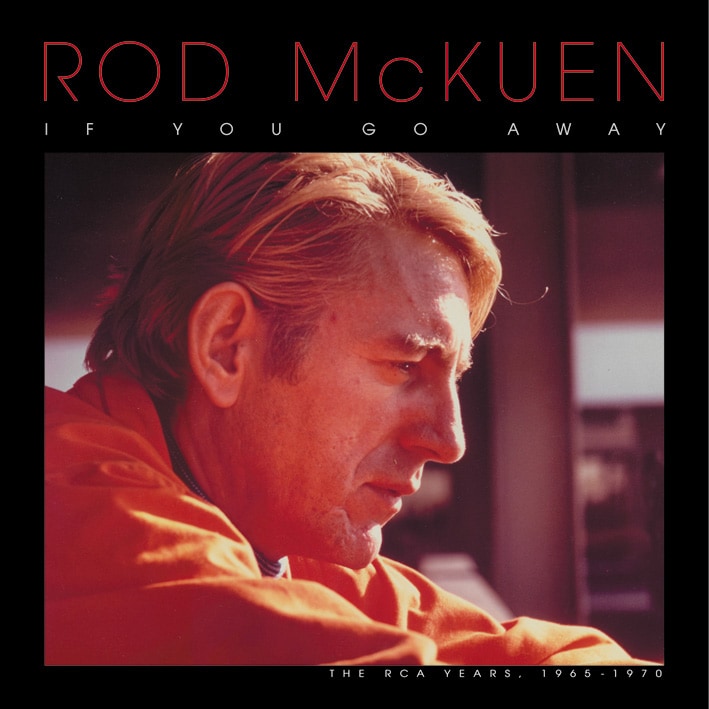 Rod is our pioneer spirit. He writes and sings like no one else and his influence shows in the work of all of today’s best young songwriters.

His birth certificate says that his father was a 27-year-old refrigerator salesman, named 'Mack' McKuen – or, the clerk's writing being less than legible, McKune. His mother, Clarice, who seems not to have known much about 'Mack,' adopted the first spelling and named her son Rodney Marvin McKuen.

"I was born in Oakland, California, at the Salvation Army Home for Unwed Mothers on April 29, 1933."  Rod writes in 'Finding My Father.' "The doctor…delivered me for $5. My father had left my mother before I was born." The opening passage of the book also included this memorable McKuen line; "Having been born a bastard gave me an advantage over all those people who spend their entire lives becoming one."

Clarice had been working as a taxi dancer in Oakland when she met Mack, Rod supposes. "Until my mother married," he writes, "she supported herself by working at a variety of odd jobs – waitress, barmaid, telephone operator, and clerk." He didn't think he really wanted for anything, though times were occasionally tough. She did marry, when Rod was quite young, and stepfather Bill Hooper worked mainly as a 'cat skinner,' levelling roads for the Works Projects Administration. Rod's earliest memories include moving around Nevada with Bill's work -- Winnemucca, Caliente, Pioche, Sparks, and Alamo, where the family would stay on Bill's parents' small farm.

Rod doesn't remember his stepfather as a kind man, but does look back at a particularly significant holiday. "We must have had a little money, because my father told me that I could have my choice – a sled or a blackboard for Christmas. I chose the blackboard because even then I wanted to write and draw pictures, and anyway most of the other kids had sleds I could borrow. My father called me a sissy, but when Christmas came, sure enough, I got my blackboard."

The family continued moving, to Washington state and back to Las Vegas, with the pre-teen Rod several times attempting to run away from home, always returning. At eleven, he made his longest trip yet, moving on his own to the Nevada towns of Ely and Elko, where he first worked as a milk boy – carrying pails of milk between the barn and kitchen of a farm, where he was paid seventy-five cents a week, plus room and board. "It was while tending cows that I began to write. First on scraps of paper, little more than words or thoughts that I couldn't make sense of or understand until I got them out of my head and on paper This led to me keeping a journal."

After a couple of years on the ranch, Rod was tracked down by the authorities and institutionalized at the Nevada School of Industry, which he now characterizes as "a reform school without walls." After three years, he was released – and used skills he'd learned on the ranch in Elko to become a rodeo cowboy. Two broken legs after a horse fell on him ended McKuen's rodeo career, though he went on to something seemingly as dangerous – moving back to the Pacific Northwest to work as a lumberjack. "Of all the jobs in a lumber camp that I liked," he writes, "I think belting up, shimmying up the trunk to top trees, then bumping, edging, thunking downward to the ground again was best. It was fun, too, to get out on the river and dance a logjam free – two, three men yelling warnings back and forth at each other, trying to be heard over the river's roar."

Not yet sixteen, Rod moved back to California, joining his Aunt Ruth in Oakland; Before long, Clarice – who had left Bill back in North Las Vegas – arrived, with Rod's younger half-brother, Billy, in tow.

Rod landed a job with radio station KROW-AM in Oakland in the early 1950s. On the air since 1920, independently-owned KROW was the training ground for future television hosts Art Linkletter, Jack Clark, and 'This Is Your Life' creator Ralph Edwards. McKuen struck up friendships with fellow disc jockey 'Big Don' Barksdale – earlier he had been a highly-regarded pro basketball player – and a young woman who was writing advertising copy in the station's office, Phyllis Diller. "They played middle-of-the-road pop,"Diller explains."Rod had an hour and a half prime time show on Saturday nights, where he chose the music and wrote a new script every week. An hour and a half is a lot of music, and he had to write an hour and a half's worth of new material every week. NBC made an attempt to copy his show, using a person who had come out of KROW…it didn't work, because Rod was writing out of his soul and his heart."McKuen says he'd play pick-up basketball with Barksdale, who coached him for another job at the station: recreating basketball games on Saturday afternoons from descriptions that would come in on the wire services teletype.

In 1953, Rod volunteered for the Army "to get my military service over with." After spending 16 weeks in basic training at Fort Ord, near Monterey, the young recruit was transferred to Public Information School at Ft. Slocum, New York. He worked as a public information specialist in Tokyo (singing on The Ginza at night), then was transferred to Korea, where he "brought aid and information to the villagers." Discharged in 1957, he returned to California, where his old friend, Phyllis Diller, got him a job working at the Purple Onion. She was on her way to becoming one of the country's pre-eminent comics, but it was Rod's first paid engagement as an entertainer.

"I used to do gigs in San Francisco before I went in the Army,"McKuen says,"reading poetry, where they passed the hat at coffee houses and late-night bars. We'd kept up a friendship; she was funny, and nice, and – I believe – having some problems with her marriage at the time."

"I had started my performing career in 1955,"Diller adds."The Purple Onion was a very well-run discovery club. It was such a kick – while I was working at the Purple Onion, others who were playing there were the Smothers Brothers, the Kingston Trio, [future 'Laugh-In' star] Alan Sues, and Maya Angelou. And they had so much faith in me, that I was able to tell them, 'You've got to hire Rod McKuen.' They said, 'He does poetry?' I said 'Trust me'.He did very well there."

"This was the bill,"continues Rod."The budget for entertainment was $200 for the week. Phyllis got $100. Maya Angelou was a calypso singer and I replaced Randy Sparks as low man on the bill. Also on the bill were Ketty Frierson – who became Ketty Lester – and the comedian Milt Kamen"

Los Angeles-based newspaper society columnist and socialite Cobina Wright Sr. came into the club one night, and invited McKuen to Hollywood. "She had friends who were opening the Windemere Hotel in Santa Monica, and I got a job painting the hotel." A week later, he was on the southbound bus. "Life as a protégé of Cobina's consisted mainly of singing at parties,"he remembers."But I was singing and living comfortably off unemployment."