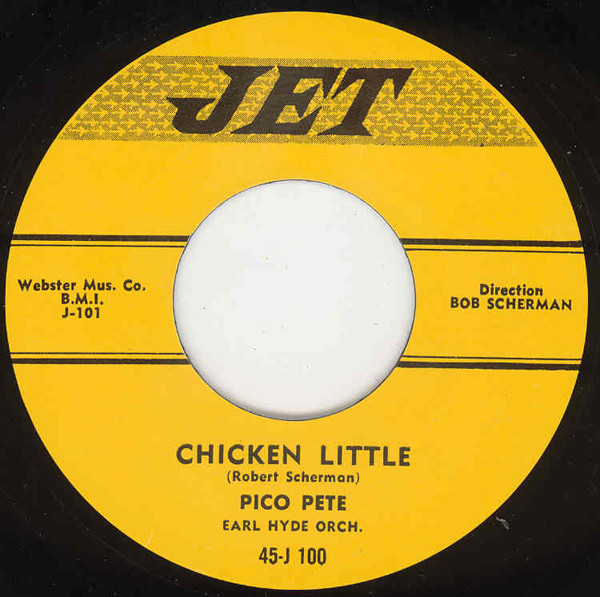 Pico Pete is THE great unknown in this compilation. He prob- ably hailed from the Mexican American community of East Los Angeles. Pico Pete was heavily influenced by Little Rich- ard, and Pete’s first single Hot Dog b/w Chicken Little was released in October of 1956 on Robert Scherman’s Jet label from Merced, California, located on Route 99 between Fresno in the south and Modesto up north. Pico Pete was accompa- nied by Earl Hyde and His Orchestra but they were only cred- ited on Jet‘s second pressing. The first pressing reads “Di- rection, Bob Scherman,” but most likely that meant he pro- duced rather than directed the orchestra. Scherman was a producer, songwriter and founder of sev- eral independent west coast labels (including Jet, Tampa, Atlas, Skylark, and others). He was originally from Indianapolis, Indiana, and began his career as a producer for Syd Nathan’s King/Federal logos in Cincinnati, Ohio. Although Jet was a small indie label of the time, the A-side of Jet 100 was also issued on the Belgian Ronnex label in late 1956