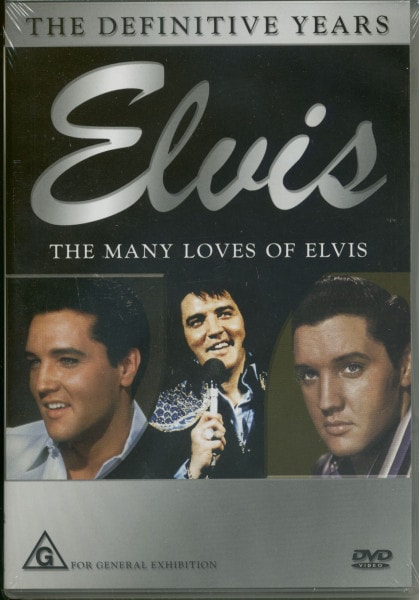 (Passport) PAL, Code 0, Color, Stereo, 4:3, english, appr. 105 min.
The Definitive Years The Many Loves Of Elvis When the world is at your feet and you're the biggest star on the planet, what's left for you to conquer? Women, and lots of them... in THE MANY LOVES, you'll hear how the King of Rock 'n' Roll managed to date almost every woman in his life, and still wind up with their affection and devotion despite the fact that they knew he was seeing other women at the same time. You'll hear how his pals in the Memphis Mafia kept one girl with 'The Boss' and one girl on the back burner in an attempt to keep them seperated. You'll also hear from COSTARS AND FRIENDS about what it was like to live in a world where Elvis' dates walked through an ever revolving door with one going in as the other went out. Interviewed here for the first time are costar VALERIE ALLEN, CONNIE STEVENS and 50's pin-up girl JEANNE CARMEN, plus many many more, all of whom share their remembrances of what it was like to love and be loved by Elvis Presley. The Intimate Loves Of Elvis What was it like to be close to Elvis Presley? Not Elvis the e image, but Elvis the human being, the man? In this program we will hear from the women who knew Elvis best, from those who shared his most private thoughts, his darkest fears, and his deepest desires. You'll see behind the macho King of Rock n' Roll image, and into the soul of a man who was adored by millions, but whose loneliness threatened to consume him. You'll also hear from former girlfriend BARBARA LEIGH as she talks about her intimate relationship with Elvis, also SHEILA RYAN and MINDY MILLER who talk about what life was like with the King of Rock 'n' Roll in his declining days. You'll also hear from superstar ANN-MARGRET about her doomed relationship with Elvis, as well as LINDA THOMPSON who was his live-in girlfriend for over four years. Elvis had many love affairs throughout his life, but none were so important as these, the women who loved the man behind the myth.