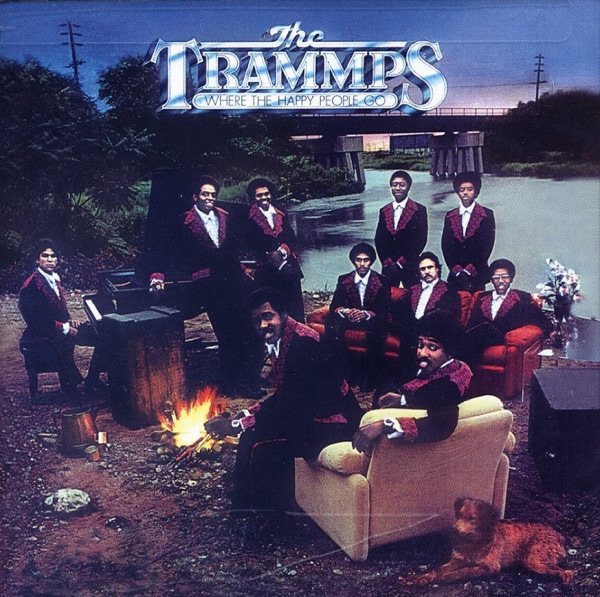 TRAMMPS: Where The Happy People Go

As flawless timekeeper for MFSB, the house band at Philly’s Sigma Sound that he anchored alongside guitarist Norman Harris and bassist Ronnie Baker, drummer Earl Young isn’t shy about highlighting his innovations. He’s absolutely on the money.

“I created the disco beat,” says Earl, born June 2, 1940. “If you ever listen to Harold Melvin & The Bluenotes’ ‘The Love I Lost’ and ‘Bad Love,’ these are disco grooves. This is before disco even came out. So when disco came out, I already had the beat, and I was saying, ‘Well, look, let’s put some fours on the floor and twos on the snare, and ride the 16th on the sock cymbal.’ And that’s the disco beat. Everybody started recording it then.”

Young could also sing. Earl had been with The Volcanos, a Philly vocal group that hit in 1965 with Storm Warning on Jimmy Bishop’s Arctic logo. When he decided to escape the anonymity of sitting behind a studio drum kit a few years later, Young recruited ex-Volcanos Jack Hart and brothers Stanley (on tenor) and Harold ‘Doc’ Wade (on baritone) to join him. Young brought in Jimmy Ellis as lead tenor. “I used to sing bass (when) Jimmy and I (were) in a group called The Exceptions,” says Young. “Being a bass singer, I always wanted to record.” Next task: deciding what to call the group.

“I had to come up with a name,” says Young. “I had names like The Hobos, The Bums. I mean, I wanted a really stupid, crazy name. But then I thought about The Trammps. I said, ‘Oh, let me put two m’s in it, and call it like high-class tramps!’” They revived an old standard by The Coasters for their first hit in 1972. “I heard this song on the back of ‘Yakety Yak’ called ‘Zing Went The Strings Of My Heart,’ and I heard Judy Garland sing it,” says Young. “I was in the studio already, recording on drum sessions, so I asked to borrow some money, and the studio loaned me some studio time.

“So I went in the studio, and I was really cutting myself. You know, back then, never did a bass singer ever sing lead. So I went in there and I hired a couple string players, and Norman and Ronnie, we was already partners anyway. So we just cut it.” Buddah Records was receptive. “Neil Bogart accepted the track,” says Earl. “He said, ‘You’ve got a good ear. It sounds different!’” The Trammps’ remake made it to #17 R&B. They encored with Pray All You Sinners before Earl, Norman, and Ronnie formed the Golden Fleece logo and issued three more Trammps charters in 1974-75: Love Epidemic, Where Do We Go From Here, and Trusting Heart. The Trammps moved to Atlantic after that, but Buddah reached back to release their rollicking Hold Back The Night in late ’75 and found itself with a #10 R&B/#35 pop hit. Young, Baker, Harris, and Philly songsmith Allan Felder penned it.

“That’s on the first album, the ‘Zing Went The Strings Of My Heart’ album,” says Young. “‘Sixty Minute Man,’ from back in the day, is on there too. That was one of my favorites. Of course, I had to do all of the songs that I thought a bass singer could sing when I put the group together.” That’s Where The Happy People Go was The Trammps’ first hit for Atlantic, rising to #12 R&B in the spring of ’76.Disco Inferno, their biggest seller of all, started out slow on Atlantic, but when the producers of ‘Saturday Night Fever’ included the blazing theme on the film’s hugely popular soundtrack, it took off, landing at #9 R&B/#11 pop during the spring of 1977.

The Trammps kicked around the lower half of the R&B hit parade through the beginning of 1979 on Atlantic, but when disco faded out, so did they. Young’s skill with the sticks never left, however. He’s had permutations of The Trammps on the road in recent years, one including singer Bunny Sigler. Ellis died March 8, 2012 in a Rock Hill, South Carolina nursing home after suffering from Alzheimer’s disease.