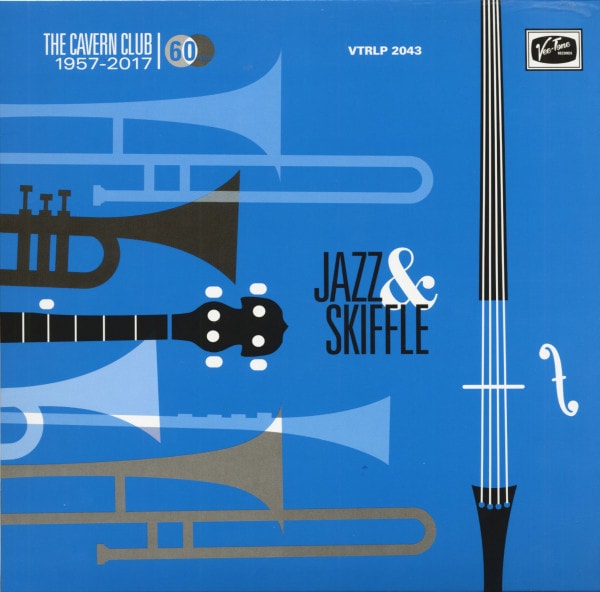 Post-War Britain saw a move away from Big Bands to that of more smaller Jazz combos, from which the Skiffle phenomenon evolved. By the late 1950’s, Liverpool alone had around 200 Skiffle groups, with the Cavern Club showcasing both new and established artists. The Skiffle craze swept Britain for around 3 years, laying the foundations for the British Rock ‘n’ Roll scene. The Cavern first opened its doors on the 16th January 1957, purely as a Jazz venue showcasing British and US performers. Top of the bill on that opening night was the Merseysippi Jazz Band (featured on this collection) supported by the Wall City Jazzmen, Ralph Watmough Jazz Band and the Coney Island Skiffle Group. At that time Skiffle groups were seen as acceptable by the Cavern management (part of the Jazz scene), no Rock ‘n’ Roll was allowed to be performed, although John Lennon famously pushed the boundaries when the Quarrymen played the Cavern slipping in a Rock ‘n’ Roll tune!

In London, the ‘cool’ mellow sounds of the Modern Jazz scene were quickly picked up by the fashionable ‘Modernists’ of the late 50’s and early 60’s. This movement quickly spread across the country, the likes of Mose Allison, Ronnie Scott and Tubby Hayes were all hugely popular and influential on the musical development of the diverse ‘Mod’ scene. Furthermore, the influence of Skiffle on the development of British popular music cannot be underestimated. Skiffle groups quickly morphed into Rock ‘n’ Roll groups by the late 1950’s, the tea chest bass being replaced by electric bass guitars and acoustic guitars by electric. Members of The Shadows, Led Zeppelin, The Hollies, Deep Purple and of course The Beatles (The Quarrymen) all cut their teeth in Skiffle groups.

To mark the Cavern Club’s 60th Anniversary year, this special limited edition 10” blue vinyl LP (individually numbered 001-500) celebrates its diverse musical heritage, showcasing some of the legends of Modern Jazz and Skiffle that performed at the Cavern in the late 1950’s and early 1960’s. The Cavern was even the official base for the Liverpool branch of the ‘Lonnie Donegan Skiffle Club’. Passionate about Skiffle, Donegan used his Skiffle Clubs to encourage young musicians to get on stage and give it a go. Although Donegan visited the Cavern, he was far too big a name to perform there in those days, but he did take to the stage on the 24th of May 2001 for a special one-off gig.