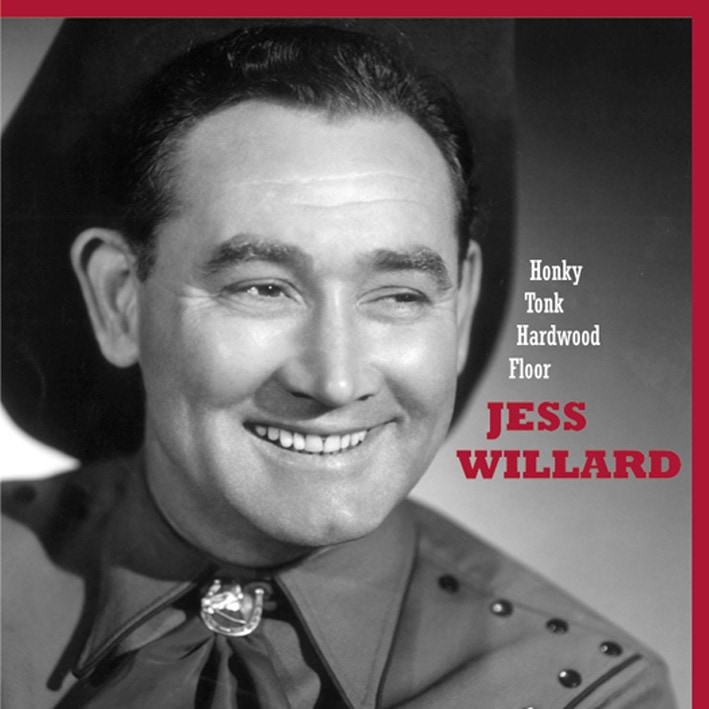 He was born Jess Willard Griffin in the small town of Washburn, along the Armstrong and Potter County lines, east of Amarillo in the Texas panhandle on March 28, 1916, just months after his namesake defeated black heavyweight champion boxer Jack Johnson in a controversial decision. He was among seven children and it's unclear how long he remained in Washburn -- there's some evidence among the scant details available about Willard's life that he may have spent at least some of his formative years in Oklahoma.

He apparently came to music early, and was taught guitar by his father, whom an early '50s 'Cowboy Songs' article claimed was Willard's "greatest influence." The article added that Willard's father was "a skilled guitarist who passed onto his son his technical ability as well as the inherent love for Western music." His other big influence, according to later publicity, was Jack Guthrie. Guthrie was only a year Willard's senior, though those publicity accounts make him sound like a seasoned father figure, one who, according to the 'Cowboy Songs' piece, "took great interest in the boy's talents and supplemented his musical training by teaching him to play by ear."

Willard later claimed that he and Guthrie hit the road together for the better part of a decade, "becoming almost inseparable buddies," and that at one point they appeared together on an Amarillo radio station. Although Willard may well have known and worked with Guthrie for some time, it seems likely that their association lasted for far less than a decade, for he shows up in no accounts of Guthrie's career to date, and he and Jess were not traveling together when Jack Guthrie teamed with his cousin Woody in California in the mid-1930s.

What Willard did in the latter '30s and early '40s if he wasn't working with Guthrie  is unclear. He married an Oklahoma girl named Lorene Northcutt and around 1943 their daughter Doreen was born. At some point he settled in Klamath Falls, Oregon, where, according to 'Cowboy Songs,' he opened a dance hall and promoted dances in the area. Jack Guthrie's death in early 1948 was, as 'Cowboy Songs' somewhat dramatically describes it, "such a shock to Jess that he slumped into a period of inactivity, appearing in public only occasionally. However, Jess had promised Jack that he would carry on in his place, and spurred on by this pledge, stepped back into the spotlight."

Willard was in LA by the end of the 1949. He began to appear as a guest -- apparently never regularly -- with Ole Rasmussen, among others. It was while sitting in with Rasmussen at Harmony Park Ballroom, singing Guthrie's Oklahoma Hills, according to a later 'Cowboy Songs' (July 1954), that he was heard by Lee Gillette. Gillette signed him (he had signed Rasmussen about a month earlier), "making it possible," as the 1951 'Cowboy Songs' blurb put it, "for Jess to give the American public the music that Jack Guthrie wanted him to bring to them."

Whether Gillette had initially intended to try to recreate the feel or success of Guthrie's sound of the mid-1940s, he plainly abandoned the idea early on. In 1949, he had recorded former Guthrie sideman Red Murrell with the explicit intent of recapturing Guthrie's sound. This had failed, as Murrell himself admits, at least commercially. Perhaps Gillette had learned from this; at any rate, the sound captured at Willard's first session seemed patterned, if anything, on the early '40s Okeh sessions of Oklahoman Johnny Bond, who had employed subtle, bluesy lead guitar and the jazz-pop harmonica of Jerry Adler on sides like Those Gone And Left Me Blues, and Draftee Blues.

With a band led by Rasmussen's fiddler Tex Atchison (billed as Tex Atchison and his Orchestra), Willard entered Capitol's Melrose Blvd. Studios in Hollywood for the first time on June 14, 1950. Although Atchison was working full-time with Rasmussen at this point, he was, according to Rasmussen's steel player Billy Tonnesen, a man who always had many irons in the fire. He was doing a lot of session work, including sides under his own name, and had worked recently in several movies with Jimmie Davis, including 'Square Dance Katy.'Atchison and Willard would continue a working relationship at least into 1953, and, after Tex left Rasmussen in '51, Willard reportedly appeared intermittently with Atchison's band. The studio group he brought in for this first session also included rhythm guitarist Jimmie Widener, late of Jimmie Davis' band and a frequent partner of Atchison's (who should not be confused -- though he often was -- with guitarist/tenor banjoist vocalist Jimmie Widener, who worked with Bob Wills, Spade Cooley, Tex Williams and others). Atchison (or Gillette or Willard) also brought in Gillette's right-hand and local star and impresario Cliffie Stone on bass; up-and-coming LA country scene guitar flash Jimmy Bryant on lead guitar; swing pianist Vic Davis; and harmonica player Jerry Adler, a veteran of those 1941 Johnny Bond sessions that these sides resemble.

It was an unusually subdued and uncharacteristic session, with Bryant especially laid back (though as impressively deft as ever), leader Atchison keeping a low profile and Vic Davis' piano almost undetectable. As mentioned above, it was closer in feel to Johnny Bond's early work of a decade before than to anything of more recent vintage, and it's arguable whether any of the covers of current hits were especially suited for Willard's voice or approach. He tackled Bud Messner and Bill Franklin's hit parody of Floyd Tillman's Slippin' Around, rewritten by Franklin, Slippin' Around With Jole Blon, as well as Webb Pierce's vocal take on Leon McAuliffe's hit New Panhandle Rag and a blues that seemingly every western singer on the West Coast was recording that year, Trouble Then Satisfaction. Atchison's Two Dollar Diamond Ring, perhaps the best cut of the session, rounded out the date.