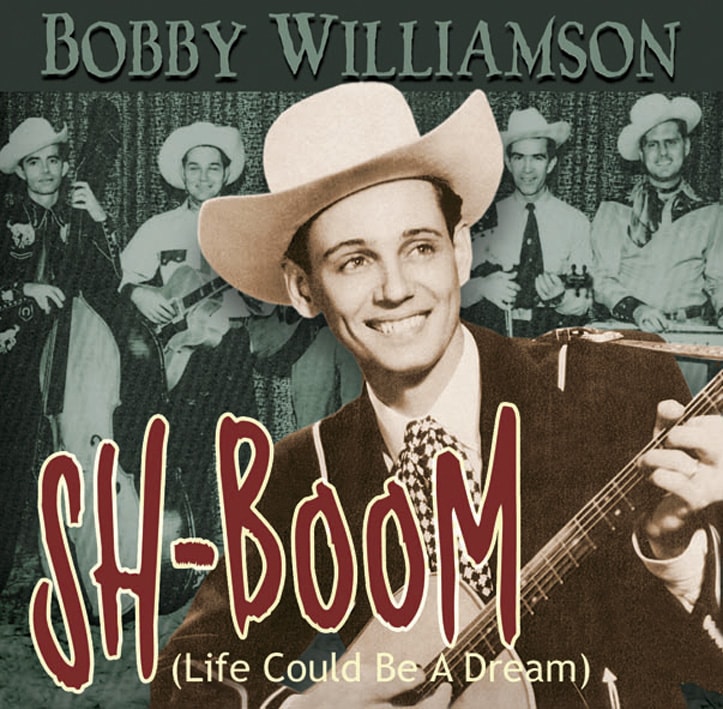 In many ways, Texan Bobby Williamson is typical of regional stars of the 1950s era, a singer who enjoyed admirable success within a couple of hundred miles of his home base but who never broke out to national stardom.

Unlike the majority who were in the same boat as he, however, Williamson certainly had the opportunity for greater fame. He was fortunate enough to land a contract with a major label, RCA Victor, and he headlined not one but two major regional Saturday night radio shows. Victor was, in fact, the only label for which Williamson ever recorded, his tenure spanning just over two years and twenty-two sides. But his promising start yielded no real hits and he is probably better remembered for his covers of others' hits – Bummin' Around or Sh-Boom -- than for any of his own songs. His stint on KRLD Dallas' Big D Jamboree had made him a name in Texas, but his move at the height of his success to its rival at WFAA, the Saturday Night Shindig, ultimately proved ill-fated.

The fact that he scored no hits and, after the mid-50s, lacked a regular showcase similar to those that had made him a star in the first place, have meant that Bobby Williamson has largely fallen into obscurity. Were it not for the fact that he recorded a cover of the 1954 hit Sh-Boom that attracted rock 'n' roll collectors a generation later, it's possible that he would not now be remembered much beyond old timers in north Texas, those who recall his heyday on the Big D Jamboree and Saturday Night Shindig.

His cover of Sh-Boom is distinctive, polished and enjoyable, but it is hardly his lone shining moment, and Williamson deserves to be remembered for more than covering it and Bummin' Around. The consistent string of singles he cut during 1952-54 proved that he had the voice and the delivery to make it big. He had the looks and personality, too. What he arguably often lacked was strong material, and

perhaps the freedom to tour extensively in support of his records. Victor country A&R man Steve Sholes's known partiality to certain publishers and writers may have had something to do with this lack of choice material, and Sholes' insistence on lacklustre novelties rather than letting Williamson concentrate on the ballads that he delivered so effectively may also ultimately have undermined the singer. He nevertheless left an engaging legacy before he bid the recording studios goodbye.

Bear Family has collected all twenty-two of Williamson's RCA sides, including two unissued tracks, which will hopefully go some way to restoring Bobby Williamson's fading memory. In addition to Bummin' Around and Sh-Boom, there are a slew of fine ballads like There's No Escape and I Remember, some infectious uptempo novelties, from Williamson's own Just Skip It and A Little Bit Of This,to the singular ephemera of Love March. Also heard are some of the best country musicians of the era, from Williamson's Dallas cohorts like Leon Rhodes, Jimmy Kelley and Paul Buskirk, to Nashville sessions stalwarts like Chet Atkins, Jerry Byrd and Homer & Jethro...