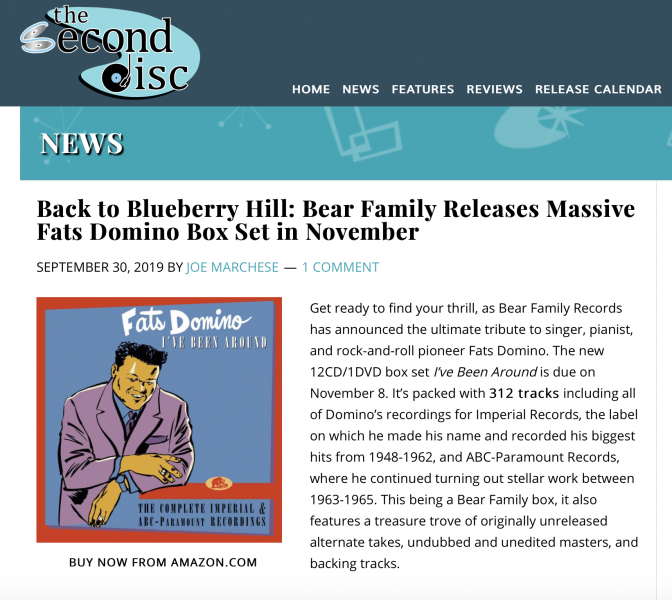 BUY NOW FROM AMAZON.COM
Get ready to find your thrill, as Bear Family Records has announced the ultimate tribute to singer, pianist, and rock-and-roll pioneer Fats Domino. The new 12CD/1DVD box set I’ve Been Around is due on November 8. It’s packed with 312 tracks including all of Domino’s recordings for Imperial Records, the label on which he made his name and recorded his biggest hits from 1948-1962, and ABC-Paramount Records, where he continued turning out stellar work between 1963-1965. This being a Bear Family box, it also features a treasure trove of originally unreleased alternate takes, undubbed and unedited masters, and backing tracks.

With his brash, joyful piano pounding, New Orleans native Antoine “Fats” Domino Jr. was one of the first “crossover” artists to bridge the divide between R&B and pop in the 1950s. It’s no surprise that he was one of the first ten inductees in the first class of the Rock and Roll Hall of Fame as he was a major influence on such artists as Elvis Presley, The Beatles, Elton John, Bobby Darin, and Randy Newman. All 61 of his R&B chart hits (including nine No. 1s) are present on Bear Family’s box, including his 37 top 40 crossover hits. These songs are still as familiar today as they were six decades ago: “Ain’t It a Shame,” “Blue Monday,” “I’m Walkin’,” and of course, “Blueberry Hill.” The original master tape to the latter, a No. 1 R&B/No. 2 pop smash, is badly damaged, but is presented in superior sound here as derived from a clean, original 78 RPM disk.

I’ve Been Around replaces Bear Family’s 1993 box set Out of New Orleans, which collected the classic Domino oeuvre in 1993 sans the ABC-Paramount material. For this set, every track has been newly remastered and many restored; the 11 songs that were sped up for release as singles in the 1950s are heard in both their original released form and authentic, speed-corrected versions. The DVD includes the 60-minute broadcast version and the 90-minute director’s cut of director Joe Lauro’s 2016 PBS American Masters documentary Fats Domino and the Birth of Rock ‘n’ Roll.

It’s all packaged with a stunning, 240-page full-color hardcover book with updated and extended liner notes by Rick Coleman; track-by-track commentary by producers Hank Davis and Scott Parker (who have been involved in over 50 Bear Family projects); a comprehensive Domino Imperial sessionography and the most complete ABC-Paramount discography available to date; plus numerous previously unpublished images.

This remarkable collection follows in the footsteps of similarly comprehensive sets released by Bear Family for Domino’s fellow rock-and-roll titans Chuck Berry and Jerry Lee Lewis. An essential release, I’ve Been Around is due from Bear Family on November 8.