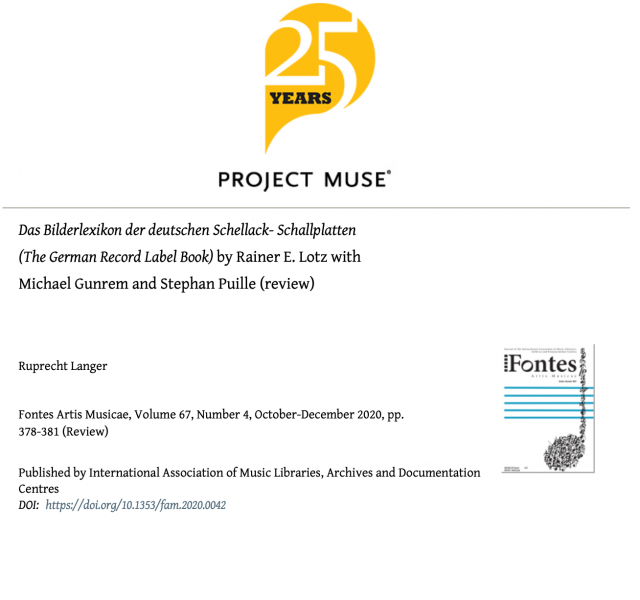 Anyone who is interested in German shellac records—whether as a collector, a research- er or a discophile—will have heard of Rainer Lotz. Lotz, who was born in Hamburg, says that he started collecting records in 1955 and is still doing so today. However, his talents include networking as well as collecting. Togeth- er these form the foundation on which his life’s work is based: Das Bilderlexikon der deutschen Schellack-Schallplatten (The German Record Label Book). This encyclopaedia is the work of the century—so much can be said even now.

Although the five-volume encyclopaedia clearly bears Lotz’s signature, his long-time col- laborators, Michael Gunrem and Stephan Puille, are also named as authors. Both of them are col- lectors with an outstanding knowledge of their subject, and their rare images, valuable notes, and important background information con- tribute significantly to the success of the work. However, they are not the only ones: around 300 other names are listed in the acknowledgements, including collectors, archivists, researchers, and institutions from all over the world whose knowl- edge has flowed into this lexicon, the creation of which spanned several decades. Rainer Lotz un- derstands his pictorial encyclopaedia as a colla- tion of information from a global community, and sees himself not as a guru, but rather as a kind of guiding spirit. This is no doubt another reason for the scope and quality of the work.

The desire to create a list of all the German shellac record labels is not new. Forty years ago, Klaus Teubig published a list of this kind in the article Deutsche Schellackschallplattenmarken 1894–1958 (German Shellac Record Labels 1894–1958), which appeared in Forum Musikbib- liothek (20, no. 2 [1980]). This was largely based on the German Music Archive’s collection of records at that time and was supplemented by additional information from older publications on this subject, including Rainer Lotz’s Gram- mophonplatten aus der Ragtime-Ära (Gramo- phone Records from the Ragtime Era [Dort- mund: Harenberg Kommunikation]), which was published in 1979. Klaus Teubig’s list encompass- es around 300 labels, for each of which he names the owners and the years of production. There are no illustrations. In 1988, Franz Schorn pub- lished the illustrated volume Alte Schallplatten- Marken (Old Record Labels [Wilhelmshaven: Florian Noetzel]), which mainly focuses on leading German shellac labels. By around 1993, Michael Gunrem already knew of 750 labels dat- ing back to the shellac era, and nowadays there are of course other dictionaries and online lists on this subject. The most important authors of these include Sutton & Nauck, who concentrate on American labels, and Yuri Bernikov, who maintains an excellent list of Russian records. In England, Frank Andrews and Brian Rust in The American Record Label Book (New Rochelle, NY: Arlington House, 1978) spent decades collecting information about British and American labels.

People who are familiar with the preliminary work carried out and lists compiled for other countries will be particularly impressed by the scope, wealth of information, and meticulous- ness of this pictorial encyclopaedia. Lotz fills more than 2,200 pages with essential informa- tion on record labels and illustrates them with more than 13,000 colour images. The structure is always the same: each label is printed in colour together with information on the series (numer- ical blocks), the number of records produced, the label owner, the record manufacturer, distri- bution, the repertoire recorded, the production period, and the colour and designs printed on the labels themselves. Even more fascinating is the body of text, which provides background in- formation on almost every label—just a few lines for labels that are largely unknown, for others half a page or more.

Here there are a few curiosities and a num- ber of narratives that are quite exciting from the perspective of industrial history. One example is the label Waffah-Record, the name of which is derived from ‘Deutsche Waffen- und Fahrrad- Fabriken Kreiensen (Harz)’ (German Weapon and Bicycle Factories Kreiensen [Harz]). It is also surprising to see how many labels are in- cluded from South America, Scandinavia, En- gland, and other countries such as Bahrain, Ni- geria, Burma, and Iraq; these do not appear to have any connection with Germany but were in fact pressed, and in some cases also recorded, in Berlin.

The background to this is that until World War I, most of the world’s biggest presses out- side the U.S., were located in and around Berlin and Hanover, where a number of English, Rus- sian, and South Asian companies, among others, also had their records manufactured. More- over, German companies such as Telefunken, Lindström, Lyrophon, and Homophon printed labels that were meant to look as if they came from exotic countries. The purpose of this was to strengthen their export business. The situa- tion became more transparent towards the end of World War I, when the seal ‘Made in Germany’ was introduced and made mandatory.
A basic knowledge of the history of the German phonograph industry is useful when it comes to understanding records and classifying them by value, significance, origin, and musical content. The first volume of the encyclopaedia opens with a brief, but by all means, adequate historical outline—also lavishly illustrated— and is followed by a glossary of the most im- portant terms in the field of record production and distribution.

At the end of Volume 5, anyone who wishes to explore the subject in greater depth, or wants to know which information Lotz draws on, aside from his own experience, will find a link list and a bibliography that encompasses several pages.
The German Record Label Book embodies the knowledge, time, collecting activities, and work of several decades, not only that of Rainer Lotz, but also of the entire international community. Lotz’s meticulous work and scientific standards have given rise to a work that bears testimony to the history of German jazz, pop, and classical mu- sic. Around sixty years of German cultural, inter- pretative, and (music) industrial history can be understood purely on the basis of these records.

The German Record Label Book brings its sub- ject to life with unprecedented clarity and detail. Therefore it is a beginning, rather than an end: it is an invitation to present and future genera- tions to engage with this subject matter—if only to come to the realisation that pop culture began not with Elvis Presley but long before World War I. The target group accordingly consists not only of collectors, but perhaps also of cultural researchers and people with a general thirst for knowledge. The encyclopaedia clearly speaks against the absence of history, since it shows which development was based on what. It helps collectors place their own collections in context and will be of use when evaluating new finds.

However, the work has one obvious weak point—one that the authors have little option but to accept: it was already out of date on the day it was published. In recent years, Rainer Lotz has commented on this in a number of discussions.
His philosophy is to publish what currently ex- ists rather than waiting for a moment of absolute completeness that never comes. Another criti- cism put forward while this work was being cre- ated referred to gaps in the descriptions of series released by major record manufacturers. These do indeed exist, since whole books would have to be devoted to companies such as Gramophone, Grammophon, HMV, Lindström, Telefunken, and Beka if all the available information were to be included. Lotz decided to publish a pictorial encyclopaediathatisasdescriptiveaspossible rather than as complete as possible. However, this does not mean that too little attention is de- voted to the major record producers: the article on Gramophone (with and without the dog), for example, is more than eighty pages long.

Rainer Lotz has been holding talks with the Gesellschaft für Historische Tonträger (Society for Historic Sound Carriers [GHT]) in Vienna for some time in order to deal with the prob- lem of keeping the encyclopaedia up-to-date. The GHT already has a platform of information, label scans, and recordings that could provide a virtual home for the information in the ency- clopaedia and could be iteratively supplemented by the community. However, it is not yet known when and exactly how this plan could be put into practice.
For all the advantages that a database has over a book, due emphasis must be given to the outstanding design and feel of the physical prod- uct. The design is appealing, and readers can have great fun following the references from one topic to another. When browsing the volumes of the encyclopaedia in this way, one cannot help but think that none of the labels mentioned ap- pear to have given much attention to the dura- bility and preservation of their products. Greater priority was often given to being up-to-date, while the procurement of raw materials and their sub- sequent recycling were already of some impor- tance during the shortages that prevailed before, during, and after the World Wars.

We still do not know what percentage of the many German record labels have been recorded and catalogued, because nobody can say what 100 percent actually consists of. And as time goes by, it becomes increasingly difficult to look back at the past. Rainer Lotz has compiled the knowledge of decades and recorded it for pos- terity in The German Record Label Book. This masterpiece is a formidable tool with which re- searchers, collectors, and anyone else with an in- terest in the subject can ask the right questions and find answers—and which will also prevent people from losing sight of the past as they move on into the future.

Ruprecht Langer
German Music Archive of the German National Library, Leipzig
(This review was previously published in Ger- man in Forum Musikbibliothek 41, no. 2 [2020]: 51–54)