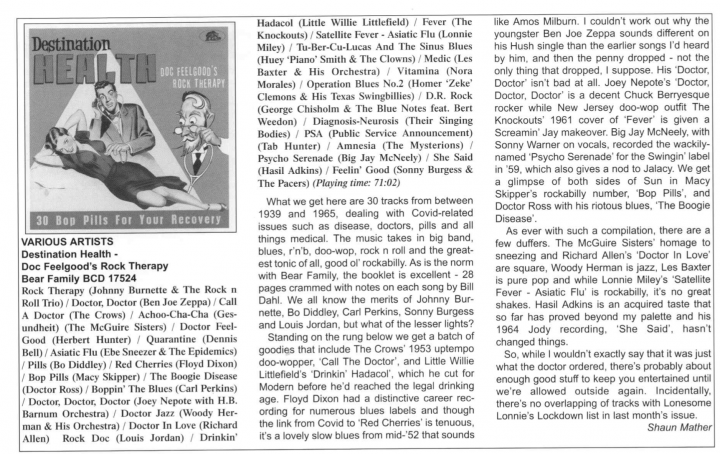 What we get here are 30 tracks from between 1939 and 1965. dealing with Covid-related issues such as disease, doctors, pills and all things medical. The music takes in big band, blues. r'n'b, doo-wop, rock n roll and the great-est tonic of all, good or rockabilly. As is the norm with Bear Family. the booklet is excellent - 28 pages crammed with notes on each song by Bill Dahl. We all know the merits of Johnny Bur-nette. Bo Diddley, Carl Perkins, Sonny Burgess and Louis Jordan, but what of the lesser lights? Standing on the rung below we get a batch of goodies that include The Crows' 1953 uptempo doo-wopper, Call The Doctor', and Little Willie Littlefield's 'Drinkin' Hadacol, which he cut for Modern before he'd reached the legal drinking age.

Floyd Dixon had a distinctive career rec-ording for numerous blues labels and though the link from Covid to 'Red Cherries' is tenuous, it's a lovely slow blues from mid-'52 that sounds like Amos Milburn. I couldn't work out why the youngster Ben Joe Zeppa sounds different on his Hush single than the earlier songs I'd heard by him, and then the penny dropped - not the only thing that dropped. I suppose. His 'Doctor, Doctor' isn't bad at all. Joey Nepote's 'Doctor, Doctor. Doctor' is a decent Chuck Berryesque rocker while New Jersey doo-wop outfit The Knockouts' 1961 cover of 'Fever' is given a Screamin. Jay makeover. Big Jay McNeely, with Sonny Warner on vocals, recorded the wackily-named 'Psycho Serenade' for the Swingin' label in '59. which also gives a nod to Jalacy.

We get a glimpse of both sides of Sun in Macy Skipper's rockabilly number. 'Bop Pills', and Doctor Ross with his riotous blues, 'The Boogie Disease'. As ever with such a compilation, there are a few duffers. The McGuire Sisters' homage to sneezing and Richard Allen's Doctor In Love' are square, Woody Herman is jazz, Les Baxter is pure pop and while Lonnie Miley's 'Satellite Fever - Asiatic Flu' is rockabilly, it's no great shakes. Hasil Adkins is an acquired taste that so far has proved beyond my palette and his 1964 Jody recording, She Said', hasn't changed things. So, while I wouldn't exactly say that it was just what the doctor ordered, there's probably about enough good stuff to keep you entertained until we're allowed outside again. Incidentally, there's no overlapping of tracks with Lonesome Lonnie's Lockdown list in last month's issue. Shaun Mather