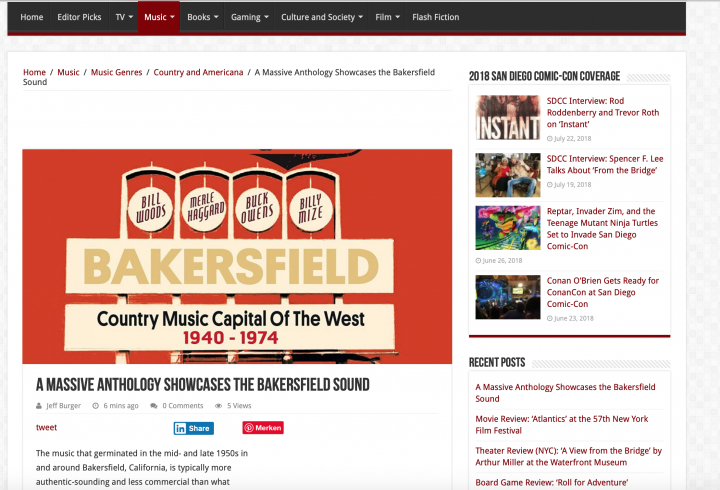 California, is typically more authentic-sounding and less commercial than what Nashville has delivered. Wikipedia calls it "the first genre of country music to be significantly influenced by rock and roll, and as a result, the first to rely heavily on electric instrumentation and a defined backbeat. It was also a reaction against the slickly produced, orchestra-laden Nashville sound, which was becoming popular in the late 1950s."
That's about as good a capsule summary as any, but keep in mind that like most musical genres, this one tends to have rather loosely defined boundaries. Just as rock can mean anything from the Sex Pistols to the Moody Blues to Bob Dylan, music lumped together under the Bakersfield umbrella can be Tex-Mex, Western swing, rockabilly, or even mournful, syrupy ballads that could have just as easily issued from Nashville.

The geographical boundaries are as fuzzy as the sonic ones, as a massive new box set, The Bakersfield Sound 1940–1974, makes clear. The set, due out October 18, includes tracks that were recorded in Bakersfield by acts that had roots elsewhere, ranging from Bob Wills and His Texas Playboys to Brooklyn, New York–born Arlo Guthrie. It also features songs associated with Bakersfield that were actually produced in Hollywood.
As the great Merle Haggard once said, "What became known as the Bakersfield sound was always bigger than Bakersfield." And as music historian Scott Bomar points out in his extensive liner notes for this anthology, Bakersfield refers to "a movement that can't be contained within strict musical definitions." Adds Bomar: "The reality is a bit more complex than a simple label or checklist could accurately reflect."

Germany's Bear Family label, which issued the set, is known for its everything-but-the-kitchen-sink mega-boxes, and this collection is true to form.

That said, this mostly chronologically arranged, 10-CD, 299-track release reflects all of the genre's complexities and features all of its essential artists. The first major box to focus on Bakersfield, it takes you on a journey that begins with a 1940 field recording by a 14-year-old boy named Lloyd Stalcup singing his own "Cotton Picker's Song" and goes on to chronicle more than three decades' worth of music.

The box ends with 1974, ostensibly because that year marked the Bakersfield equivalent of rock's 1958 and 1959, when Buddy Holly died and Elvis Presley entered the army. In 1974, Buck Owens had his last big solo hit, guitarist Don Rich died in a motorcycle accident, and Merle Haggard spent his last full year as a resident of the city. So the 1974 cutoff point makes some sense, though it might have been nice if the compilers had managed to find a place for a few tracks by such later Bakersfield-influenced artists as Dwight Yoakam and Randy Travis.

But with more than 12 hours of music here, that's clearly a quibble. If this is one of the Bear Family label's everything-but-the-kitchen-sink mega-boxes, think of acts like Yoakam and Travis as the kitchen sink; virtually everything else is here.

For starters, the box includes 27 tracks from Owens and 23 from Haggard, the genre's two most luminous exports (both of whom, incidentally, had marriages to singer Bonnie Owens, who is also featured on several tracks). Here, too, are numbers from many other artists whose names country fans will recognize, among them Jean Shepard, Ferlin Huskey, Red Simpson, Tommy Duncan, the Maddox Brothers and Rose, and—in a mid-1940s radio performance—the aforementioned Bob Wills.

There are also lots of fascinating obscurities, including many rarities from local labels. The program embraces Bill Woods & His Orange Blossom Playboys' 1949 single, "Have I Got a Chance with You," the first commercial release ever by a Bakersfield country group; a cover of the Kalin Twins' 1958 pop hit, "When," by Billy Mize and Cliff Crofford; songwriter Harland Howard's first recording; and bandleader Johnny Barnett's only single, which happens to also have the distinction of being the first commercially released song by Haggard. Also on the menu: Barbara Mandrell's first solo recording; no fewer than three tunes about Dear John letters; a song by country-rock guitarist Clarence White, who would go on to play with the Byrds; and much, much more.

As Bomar says in the liner notes, "We've tried to avoid too much of the obvious stuff you've heard a million times. You'll find some hits, but we've gravitated toward deep cuts, alternate takes, album tracks, live material, and even some rarities that have never been released until now."

The box set's accompanying LP-sized, 224-page hardcover book—which will probably take you at least as long to get through as the music—is nearly as rewarding as the recordings. It includes well-informed essays about the history of the Bakersfield sound, lots of rare photographs, biographies of all the artists, and notes on all the songs. Between the book and the music, there's more than enough here to give you a deep understanding of how this important genre emerged and evolved—and of the impact it has had on the wider world of country.