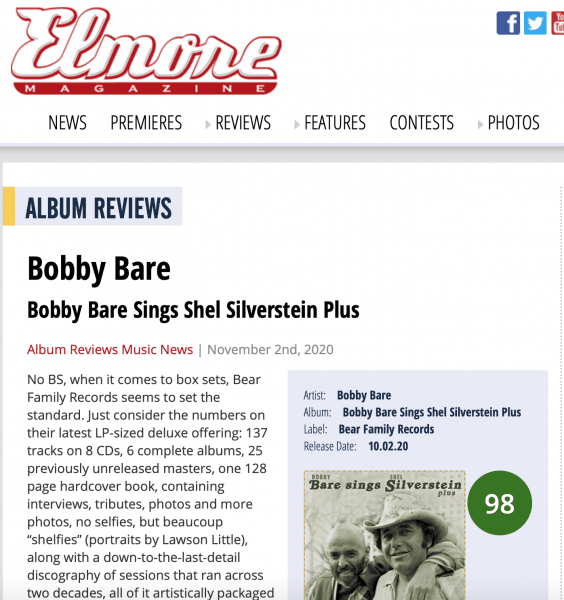 No BS, when it comes to box sets, Bear Family Records seems to set the standard. Just consider the numbers on their latest LP-sized deluxe offering: 137 tracks on 8 CDs, 6 complete albums, 25 previously unreleased masters, one 128 page hardcover book, containing interviews, tributes, photos and more photos, no selfies, but beaucoup “shelfies” (portraits by Lawson Little), along with a down-to-the-last-detail discography of sessions that ran across two decades, all of it artistically packaged and remastered beautifully so it sounds like it was recorded yesterday.

Like “sessions,” the often-repeated word in Bare’s first big 1959 hit “All American Boy,” playing on lots of sessions were always very important to Robert Joseph Bare Sr.. The music world first knew Bobby as “Bill Parsons” thanks to sloppy label copy on that Top 40 hit.There’s no sloppiness here with this outstanding Bear Family production of the now CMHOF legend’s prolific partial lives work. The bulk of it originates from one irrepressible songwriter, Shel Silverstein. Much of it is conceptual, a term that did not exist in the Music Row that cranked out standard issue LPs back then, with one or two hits and eight placeholders.

Bare didn’t know Silverstein when he first covered, “Sylvia’s Mother,” Silverstein’s huge hit for Dr. Hook . But it was a great song and Bare started working with him on conceptual albums in the early ’70s, with the landmark album “Lullabys, Legends and Lies.” Silverstein wrote that album for Bobby in one weekend. They soon became joined-at-the-hip fast friends. 118 of these songs here are the work of Silverstein and his sometime co-writers. The “Plus” refers to 19 additional songs from other writers that tie in artistically.

Although Silverstein also provided songs for country artists like Johnny Cash, Loretta Lynn, Waylon Jennings and Emmy Lou Harris, Bobby Bare remains the best interpreter of the wide range of topics that poured out of Silverstein’s pen, probably because they complimented one another so perfectly. Case in point: In a hotel room one night, Silverstein was teaching Bare some new tunes. Bare had been singing the new songs for some time that night, but was missing the way Silverstein heard one melody. Taking the guitar to demonstrate, Silverstein only got one line of his new creation out before they heard banging on the wall and a woman shouting, “SHUT THE FUCK UP!”

The world is a better place that Silverstein never took offense at his vocal critics, and that Bare could “Hear through the demo.” Listen to these 137 tracks, and hear for yourself.