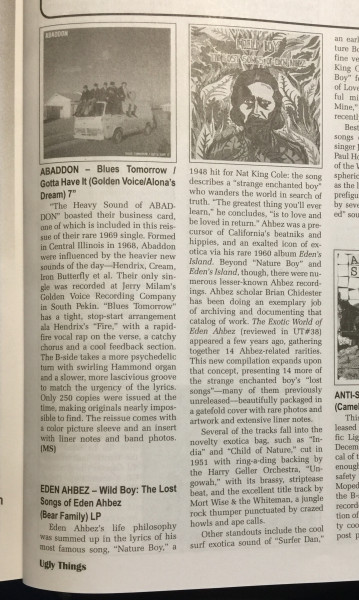 EDEN AHBEZ — Wild Boy: The Lost Songs of Eden Ahbez (Bear Family) LP Eden Ahbez's life philosophy was summed up in the lyrics of his most famous song, "Nature Boy," a 1948 hit for Nat King Cole: the song describes a "strange enchanted boy" who wanders the world in search of truth. "The greatest thing you'll ever learn," he concludes, "is to love and be loved in return." Ahbez was a pre-cursor of California's beatniks and hippies, and an exalted icon of ex-otica via his rare 1960 album Eden's Island. Beyond "Nature Boy" and Eden's Island, though, there were nu-merous lesser-known Ahbez record-ings. Ahbez scholar Brian Chidester has been doing an exemplary job of archiving and documenting that catalog of work. The Exotic World of Eden Ahbez (reviewed in UT#38) appeared a few years ago, gathering together 14 Ahbez-related rarities.

This new compilation expands upon that concept, presenting 14 more of the strange enchanted boy's "lost songs"—many of them previously unreleased—beautifully packaged in a gatefold cover with rare photos and artwork and extensive liner notes. Several of the tracks fall into the novelty exotica bag, such as "In-dia" and "Child of Nature," cut in 1951 with ring-a-ding backing by the Harry Geller Orchestra, "Un-gowah," with its brassy, striptease beat, and the excellent title track by Mort Wise & the Whiteman, a jungle rock thumper punctuated by crazed howls and ape calls. Other standouts include the cool surf exotica sound of "Surfer Dan,"