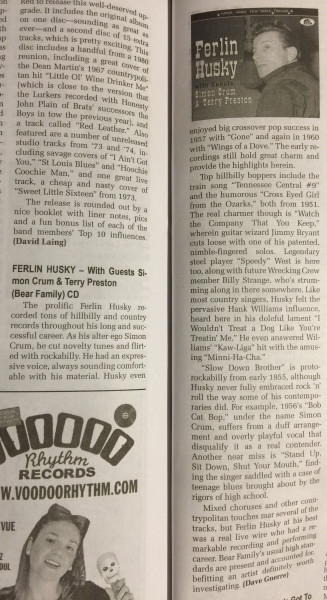 FERLIN HUSKY — With Guests Simon Crum & Terry Preston (Bear Family) CD The prolific Ferlin Husky recorded tons of hillbilly and country records throughout his long and successful career. As his alter ego Simon Crum, he cut novelty tunes and flirt-ed with rockabilly. He had an expressive voice, always sounding comfort-able with his material. Husky even enjoyed big crossover pop success in 1957 with "Gone" and again in 1960 with "Wings of a Dove." The early re-cordings still hold great charm and provide the highlights herein. Top hillbilly boppers include the train song "Tennessee Central #9" and the humorous "Cross Eyed Girl from the Ozarks," both from 1951.

The real charmer though is "Watch the Company That You Keep," wherein guitar wizard Jimmy Bryant cuts loose with one of his patented, nimble-fingered solos. Legendary steel player "Speedy" West is here too, along with future Wrecking Crew member Billy Strange, who's strum-ming along in there somewhere. Like most country singers, Husky felt the pervasive Hank Williams influence, heard here in his doleful lament "I Wouldn't Treat a Dog Like You're Treatin' Me." He even answered Wil-liams' "Kaw-Liga" hit with the amus-ing "Minni-Ha-Cha." "Slow Down Brother" is proto-rockabilly from early 1955, although Husky never fully embraced rock 'n' roll the way some of his contempo-raries did.

For example, 1956's "Bob Cat Bop," under the name Simon Crum, suffers from a duff arrange-ment and overly playful vocal that disqualify it as a real contender. Another near miss is "Stand Up, Sit Down, Shut Your Mouth," find-ing the singer saddled with a cbasetioef teenage blues brought about by rigors of high school. Mixed choruses and other co, touches mar several of the markable recording an athahis best tracks, but Ferlin Husky d a re-was a real live wire Who ._„ ante aclopterformilig, befitting an artisvte"G`nerre) gthe anted dards are present a _„finitely w career. Bear Family's usual bini oral investigating.