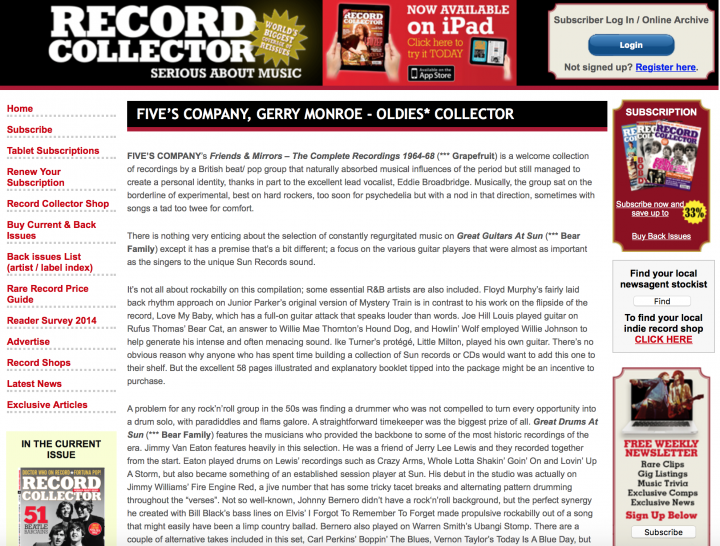 FIVE’S COMPANY’s Friends & Mirrors – The Complete Recordings 1964-68 (*** Grapefruit) is a welcome collection of recordings by a British beat/ pop group that naturally absorbed musical influences of the period but still managed to create a personal identity, thanks in part to the excellent lead vocalist, Eddie Broadbridge. Musically, the group sat on the borderline of experimental, best on hard rockers, too soon for psychedelia but with a nod in that direction, sometimes with songs a tad too twee for comfort.

There is nothing very enticing about the selection of constantly regurgitated music on Great Guitars At Sun (*** Bear Family) except it has a premise that’s a bit different; a focus on the various guitar players that were almost as important as the singers to the unique Sun Records sound.

It’s not all about rockabilly on this compilation; some essential R&B artists are also included. Floyd Murphy’s fairly laid back rhythm approach on Junior Parker’s original version of Mystery Train is in contrast to his work on the flipside of the record, Love My Baby, which has a full-on guitar attack that speaks louder than words. Joe Hill Louis played guitar on Rufus Thomas’ Bear Cat, an answer to Willie Mae Thornton’s Hound Dog, and Howlin’ Wolf employed Willie Johnson to help generate his intense and often menacing sound. Ike Turner’s protégé, Little Milton, played his own guitar. There’s no obvious reason why anyone who has spent time building a collection of Sun records or CDs would want to add this one to their shelf. But the excellent 58 pages illustrated and explanatory booklet tipped into the package might be an incentive to purchase.

A problem for any rock’n’roll group in the 50s was finding a drummer who was not compelled to turn every opportunity into a drum solo, with paradiddles and flams galore. A straightforward timekeeper was the biggest prize of all. Great Drums At Sun (*** Bear Family) features the musicians who provided the backbone to some of the most historic recordings of the era. Jimmy Van Eaton features heavily in this selection. He was a friend of Jerry Lee Lewis and they recorded together from the start. Eaton played drums on Lewis’ recordings such as Crazy Arms, Whole Lotta Shakin’ Goin’ On and Lovin’ Up A Storm, but also became something of an established session player at Sun. His debut in the studio was actually on Jimmy Williams’ Fire Engine Red, a jive number that has some tricky tacet breaks and alternating pattern drumming throughout the “verses”. Not so well-known, Johnny Bernero didn’t have a rock‘n’roll background, but the perfect synergy he created with Bill Black’s bass lines on Elvis’ I Forgot To Remember To Forget made propulsive rockabilly out of a song that might easily have been a limp country ballad. Bernero also played on Warren Smith’s Ubangi Stomp. There are a couple of alternative takes included in this set, Carl Perkins’ Boppin’ The Blues, Vernon Taylor’s Today Is A Blue Day, but otherwise anyone interested in Sun records will have heard it all before. If that’s the case, the nice enclosed booklet might be more necessary than the CD itself.

So-called “ghost” records, or cover recordings of original hits, usually sold at a budget price, first appeared significantly in the UK with the Embassy label, available exclusively through Woolworths’ retail stores. Great British Record Labels: Embassy (** Rock History) features a host of obscure or long forgotten vocalists who did their best to sound like the US artists they copied. Many of the records were not very accurate, but they do have a certain charm when viewed in retrospect. Most of all, the out-and-out rock‘n’roll cuts seem to have fallen short of requirements, often a tinny group backing pop singers with little knowledge of what they should sound like. The Canadians’ version of Rock Around The Clock has a vibes solo. Embassy initially produced the 10” 78rpm until 1958, by which time the 45rpm had become more established.

For anyone who wants a collection of familiar songs, sung with impeccable pronunciation and set against a background of lush orchestration, the GERRY MONROE set Sally Pride Of Our Alley – The Complete Chapter 1 Recordings (** Cherry Red) might be the one to consider. But despite Monroe’s amazing vocal technique, his ability to reach high falsetto without the slightest effort, these recordings would not be to everyone’s taste. Overuse of falsetto can be irritating. When he sings a song straight, without any vocal tricks, his voice is very engaging, but that doesn’t happen very often over 49 tracks. Whether two discs is one too many is up to the individual listener.