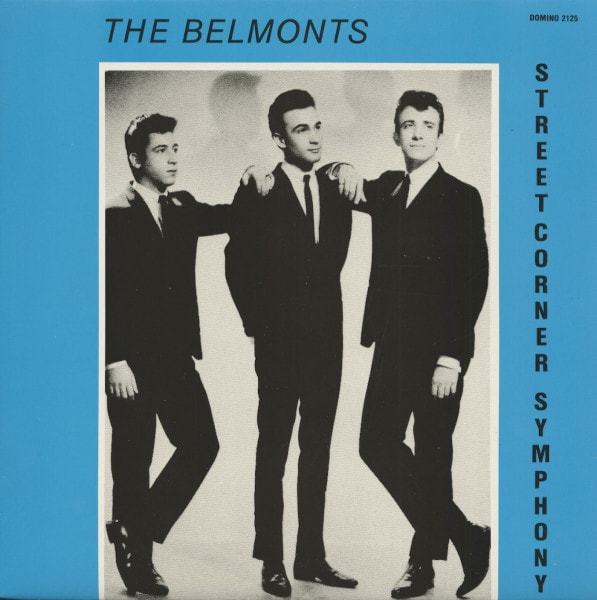 The Belmonts with Pete Bennett Orchestra

Dion DiMucci and The Belmonts went their separate ways in late summer of 1960, due to a difference regarding musical direction. Dion liked to rock, while The Belmonts preferred a poppier approach. The Bronx group recorded in both styles during the late '50s at Laurie Records, scoring hits with everything from I Wonder Why and A Teenager In Love to Where Or When and When You Wish Upon A Star.  Yet Come On Little Angel sounds a lot like solo Dion: brawny rock and roll. Only difference was, Carlo Mastrangelo now fronted The Belmonts.

First tenor Angelo D'Aleo was just back from the Navy in November of 1960 when he, Carlo, and second tenor Freddie Milano cut their first post-Dion 45 for Laurie, a revival of Robert & Johnny's We Belong Together. Then musician/arranger Pete Bennett convinced The Belmonts to form their own label with him, initially called Surprise. Their inaugural remake of Norman Fox and The Rob Roys' '57 single Tell Me Why did a lot better than the original, peaking at #18 during the spring of '61 despite their label being forced to change its name to Sabrina because there was already a Surprise logo. The trio next transformed Duke Ellington's Don't Get Around Much Anymore into a rock and roll tune, scoring a #57 hit that fall.

Prior to the release of their third consecutive hit, the infectious I Need Some One, which made it to #75 (Carlo co-wrote it), there was a last label name change to Sabina Records. Come On Little Angel came next. A swaggering slice of street corner harmony written by homeboy Ernie Maresca (who had his own '62 smash for Laurie with Shout! Shout! [Knock Yourself Out]) and Tom Bogdany with Bennett leading the backing combo, it was released in July of '62 and climbed to #28 pop late that summer with How About Me, penned by Carlo, on the flip.

Carlo followed Dion's lead and went solo, returning to Laurie and making several 45s under his first name only. The Belmonts replaced him with Frank Lyndon. At Sabina, Bennett was history as the label secured national distribution from Canadian-American Records. Gerry Granahan, former leader of Dicky Doo and The Don'ts, would now be involved in production. The Belmonts managed two more Sabina chart entries with Diddle-Dee-Dum (What Happens When Your Love Has Gone) in late '62 and Ann-Marie in early '63. Granahan brought The Belmonts over to United Artists in 1964, but their run was over.

A reunion with Dion elicited a '66 album for ABC-Paramount, but lightning didn't strike twice. "You just can't go back, you know?" muses Dion. "It just wasn't there." There were more reunions, with and without Dion. Fred and Angelo performed in one Belmonts lineup until 2011. Milano died on New Year's Day of 2012.