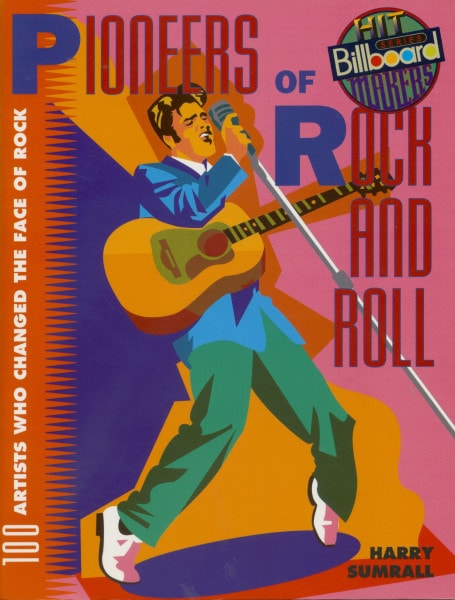 Billboard Magazine: Pioneers Of Rock And Roll - 100 Artists Who Changed The Face Of Rock by Harry Sumrall

Rock and roll wasn't supposed to last.
From the days in 1953 when Bill Haley and His Comets' "Crazy Man Crazy" became the first rock record to enter the Billboard charts, through the arrival of Elvis Presley, Chuck Berry, and Little Richard later in the decade, the music and its stars were often dismissed as a passing phase, a garish blip on the screen of constantly changing teen tastes. In fact, ten years after rock's inception, even the biggest stars of the era downplayed their signifi-cance. In 1963, in the first flush of the mania that would be named for them, the Beatles often talked of what they would do "when the bubble burst": at the time, George Harrison mentioned something about becoming an electrician; Ringo Starr said he dreamed of owning a string of ladies' hair salons.

But the bubble didn't burst, for the Beatles or for rock and roll. Rock and roll did last. It enters its fifth decade as a multibillion-dollar-a-year industry whose reach extends beyond teenagers to generations who have grown up, and older, with it. Along the way, it has infiltrated the culture of the world. Its songs have provided the soundtracks for political campaigns and social movements, for wars and revolutions. Its heroes have been at the forefront of constantly evolving tastes, mores, trends, and aes-thetics. From Elvis shaking the Eisenhower years from their secure slumber with a wag of his hips; to Bob Dylan galvanizing the civil rights movement of the 1960s with "Blowin' in the Wind"; to the Beatles changing the look and sound of virtually everything by the sheer power of their presence; to Bob Geldof raising tens of millions of dollars for starving Ethiopians with Band Aid and Live Aid; to the heavy metal of Van Halen, which U.S. military pilots used to pump themselves up for combat in the Gulf War, rock and roll has proved that is has not merely last-ed—it has mattered.

That rock has done all this is hardly news. And outlining the role and importance of rock isn't the purpose of this book. Instead, Pioneers of Rock and Roll is an examination of artists whose music and careers have defined and redefined rock in the course of its history and, in the process, made it a crucial component of the culture of its time. "Artists" is the key word in all of this and is used intentionally in place of "performers," "musicians," or "acts." Each of the individuals or groups includ-ed in this book has contributed in one or more ways to establishing rock as an art form. While the latter point—rock as art—could still be open to debate in some aesthetic spheres, the case for such status can certainly be made. If art can be defined as a creative expression of a particular time, for all time, then rock is art. It would be impossible, or at least misleading, to discuss or study or evaluate the social history of the West in the second half of this century without factoring in the impact of rock and roll.

The point of all this as it pertains to this book is that if rock and roll had simply been a commercial device to separate teens (or their parents) from their money, or just another form of entertainment, it would never have lasted. It has lasted because, in its highest forms—in the music of people who are included in this book—it is more than those other aspects. It is art. And this book is about how they have made it thus. On to practical matters. The artist entries have several components. Each includes an analysis of music and impact of the indi-vidual artist or group that explains why and how they became "pioneers." And each includes a discus-sion of the artist's career, providing pertinent dates and facts to place the analysis in a historical context.

Artikeleigenschaften von Billboard Magazine: Pioneers Of Rock And Roll - 100 Artists Who Changed The Face Of Rock by Harry Sumrall