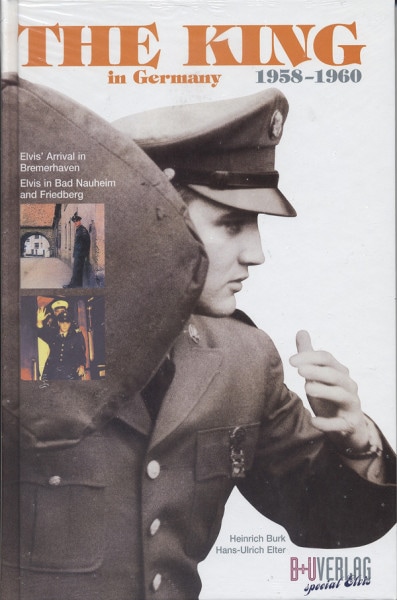 (2008/B&U) English, Hardcover, 15x22 cm, 276 pages, b&w illustrations; Elvis' arrival in Bremerhaven, Elvis in Bad Nauheim and Friedberg.
Last original stock copies - out of print - rare now!
On October 1, 1958, the King of Rock´n´Roll, arrived aboard the Troops Carrier, "USS General Randall" at the Columbus Pier in Bremerhaven. He served his tour of duty in the Ray Barracks in Friedberg until March 1, 1960. During the 15 months of his sojourn, the whole Wetterau region was in an uproar: Fans besieged his house in Bad Nauheim, the accompanying Presley clan generated excitement, and countless stories and anecdotes made the rounds. The authors Heinrich Burk and Hans-Ulrich Elter spoke with eyewitnesses who recalled their experiences with the "King". The grand period of Rock´n´Roll at the end of the 1950´s in this books comes to life once again: How the international hit "Wooden Heart" was written, how Elvis was kidnapped, how he met his great love, Priscilla...