Press - Fats Domino I’ve Been Around - The Complete Imperial and ABC Recordings - offbeat.com 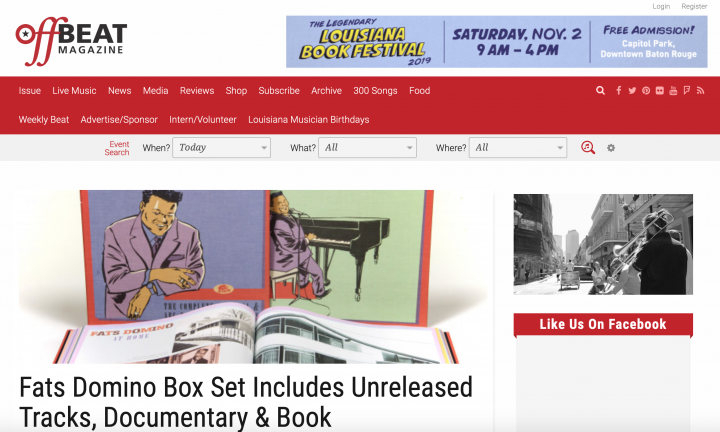 Besides Domino’s iconic music, I’ve Been Around includes both a 60-minute and 90-minute cut of the PBS American Masters documentary Fats Domino and the Birth of Rock ’n’ Roll, which was released in 2016 and includes interviews with the late Dave Bartholomew and Crescent City studio owner Cosimo Matassa. The set also includes a 240-page full-color book, filled with updated notes by biographer Rick Coleman, commentary by producers Hank Davis and Scott Parker, a complete Domino sessionography and a collection of previously unpublished pictures.

During the 1950s, Domino was the first R&B artist to gain recognition by the younger generation, bridging the gap between African-American and white audiences. By leaving indelible marks on the history of music–such as “Ain’t it a Shame,” “I’m in Love Again,” “Blue Monday,” “Blueberry Hill” and “I’m Walkin’”–Domino was inducted into the Rock and Roll Hall of Fame in 1986. On Oct. 24, 2017, Domino died at his home in Harvey, LA at the age of 89.