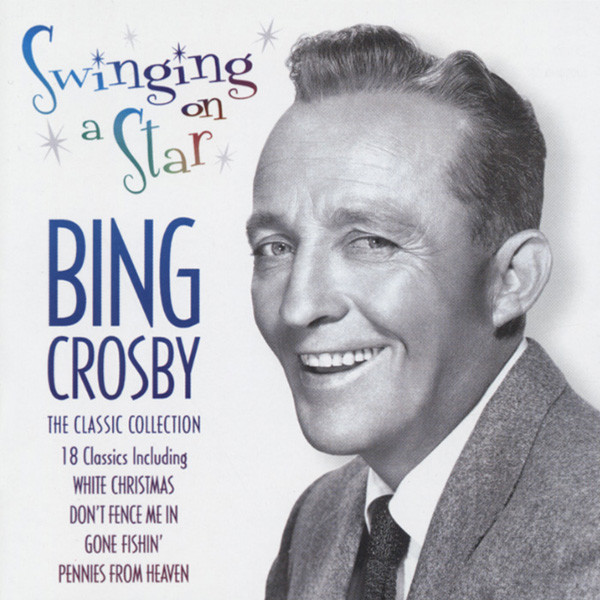 Born Harry Lillis Crosby on May 2, 1903, in Tacoma, WA; died of a heart attack on October 14, 1977, in Madrid, Spain. Bing Crosby was one of the most popular singing stars in the history of show business and one of the best-selling musicians of all time. In his almost 60 years spanning career, Crosby produced over 1,600 recordings, of which he sold half a billion copies. His honeyed baritone revolutionized crooning and won him a worldwide audience.

Crosby always gave the year of his birth as 1904, but some sources say he was born on May 2, 1903 in Tacoma, Washington. He was one of seven children of a bookkeeper and a pious, ambitious mother. When Crosby was still a young child, his family moved to Spokane, where his father took a job with the Inland Brewery. Young Crosby attended Catholic schools and earned the nickname 'Bing' from his fondness for a newspaper comic strip called the 'Bingville Bugle.'

Bing Crosby as a child loved to sing and he sang to himself everywhere he went. Ironically, he never learned to read music, and he quit his only formal singing lessons after a few weeks. Entirely self-taught as a singer, Crosby gravitated to the kind of music he heard on his parents’ gramophone, popular songs, ragtime, and show numbers. Crosby attended Gonzaga High School, a Jesuit school. After high school he enrolled in Gonzaga University with the intention of becoming a lawyer. Other interests intervened, however; with a group of his Spokane buddies, he formed a small band in 1921, The Musicaladers, which performed at school functions and private parties. Crosby was the group’s vocalist and drummer, his only work as an instrumentalist. The Musicaladers were surprisingly successful for a band staffed principally by teenagers; before long they found themselves entertaining audiences between films at a Spokane movie house.

Even after the Musicaladers disbanded, Crosby and a friend, Al Rinker, continued to work together as a duo. In 1925 the two decided to take a chance at the big time; they pooled their resources and set off for Los Angeles in a beat-up Model T Ford. They were nothing less than an overnight success. Rinker’s sister was Mildred Bailey, herself a successful vaudevillian, and she was able to help the boys secure a contract for West Coast vaudeville work. Billing themselves as Two Boys and a Piano, Crosby and Rinker sang popular numbers in a jazzy style that has since become the signature sound of crooning.

Late in 1926 the duo received a lucrative offer from Paul Whiteman, one of the nation’s most famous orchestra leaders. They joined Whiteman in Chicago, then moved with him to New York City but failed to make a hit. Shepherd and Slatzer suggested that Manhattan's mainstream audiences were not quite ready for Bing’s scat singing and off-beat presentation. Whatever the case, Crosby and Rinker separated from Whiteman’s act and added a third partner, Harry Barris. With Barris and Rinker both at piano and Crosby as front man, the group became known as The Rhythm Boys.

The Rhythm Boys and the Coconut Grove

As The Rhythm Boys, Crosby and his partners regained their professional standing quickly. They cut several singles for the Victor label in 1927, including 'Mississippi Mud,' 'From Monday On,' and 'Side By Side,' and after a vaudeville tour on their own, rejoined Whiteman for a highly successful West Coast run. In 1930 they appeared in their first feature film, which starred Whiteman and was called The King of Jazz. When the movie was completed, they struck out on their own again, signing a contract to appear with the Gus Arnheim Orchestra at the prestigious Coconut Grove nightclub in Los Angeles. In September of 1930 he married starlet Dixie Lee. Shortly thereafter he made his first two-reel short film, I Surrender, Dear, using a song Barris had written for him as the movie’s title. Crosby’s performance of 'I Surrender, Dear' brought him to the attention of William Paley, the owner of CBS. Paley offered Crosby his own radio show, and, after some nasty legal wrangling, Crosby left both the Coconut Grove and The Rhythm Boys.

On September 2, 1931, Crosby opened his first radio show with a new theme song: 'Where The Blue Of The Night Meets The Gold Of The Day.' He performed live for an unprecedented 20 weeks at Manhattan’s Paramount Theatre, signed a movie contract with Paramount Pictures, and began recording regularly with a new label, Decca Records. Throughout the Great Depression and on into the years of World War II, Bing Crosby was the nation’s most beloved crooner and one of its favorite stars. In 1935 Crosby moved from CBS radio to NBC, where he starred on the popular Kraft Music Hall. He worked on that live show for nearly a dozen years, leaving only when ABC radio allowed him to pre-record his programs on audiotape. In the meantime, he starred or appeared in some one hundred films, including the highly popular 'Road'-series, 'The Road To Singapore,' 'The Road To Zanzibar,' 'The Road To Morocco,' with Bob Hope and Dorothy Lamour; Hope and Crosby played off one another perfectly, often ad-libbing dialogue and flip comments in these essentially silly pictures.

During the glory days of the big Hollywood studios, Crosby was under contract to Paramount Pictures. He often appeared in as many as three full-length features per year and won an Academy Award in 1945 for portraying a priest in Going My Way. It was radio, however, that made Crosby a star. His exceptional voice and casual, relaxed demeanor projected well over the airwaves, and his innovative, jazzy style of singing won the hearts of younger fans and the envy of his peers. In the midst of the Great Depression, Bing Crosby became a millionaire, and by his death in 1977 he was estimated to be worth more than $80 million, most of it invested in industry and real estate. His success is all the more phenomenal in that it came long before the inflated salaries and lucrative endorsement contracts earned by today’s popular singers.

Crosby’s voice and delivery were surprisingly adaptable; over the years he sang every type of popular song, from cowboy ditties to blues, ballads, and patriotic numbers. He was initially reluctant to sing hymns, but he eventually overcame this reticence, and today his Christmas carols, especially 'White Christmas,' are his most treasured recordings. For many years Crosby’s rendition of 'White Christmas' was the best-selling recording in history. He recorded songs for the labels RCA Victor, Columbia, Decca, and MCA, between 1927 and 1977.

Crosby returned to CBS radio in 1949 and made the transition to television easily in the early 1950s. His television forte was the variety special. Beginning in 1966 he hosted a yearly Christmas show that featured his second wife, Kathryn, and their children. Crosby’s only regular weekly television show was a situation comedy, The Bing Crosby Show, which ran for two seasons in 1964-1965.

Even the advent of rock and roll did little to erode Crosby’s popularity. His fans had aged along with him and saw him as a wholesome, relaxing alternative to the rhythms of the new generation. Nor did Crosby disappoint them; his voice held its clarity as he aged, and he continued to perform, live and on television, right up to his death in 1977.

In his later years Bing Crosby indulged his lifelong passion for golf by founding a tournament in his name. In October of 1977, Crosby collapsed from a massive heart attack on a golf course outside Madrid, Spain. He is survived by his second wife and seven children, four sons from his first marriage with Dixie Lee, including famous singer Gary Crosby, and two sons and a daughter from his second with actress Kathryn Grant, and by his younger brother Bob of Bob Crosby & The Bobcats fame. Several of his older sons had performed with him during the 1940s, and his second family often appeared with him on his television specials.

The persistence of Crosby’s fame is evident in the number of his recordings still in print and in the re-broadcast of his many films. His Irish good looks and inimitable baritone stand as one of the strongest testaments of radio’s golden age and one of the crowning achievements of the Hollywood film.