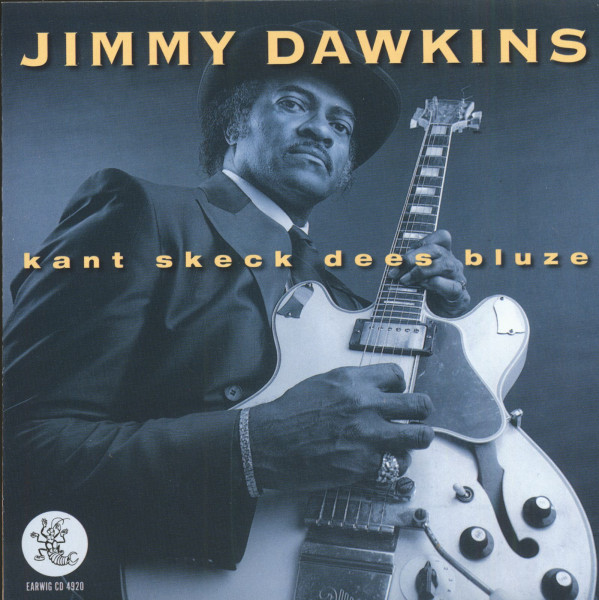 Jimmy "Fast Fingers" Dawkins, blues guitarist, is perhaps an unfamiliar name to the blues record buyer but definitely not to the blues scene of Chicago's West Side, where he has been a mainstay for more than ten years. There, he stands out as a solemn, thoughtful figure on the bandstands of the taverns and clubs that dot Ogden, Roosevelt Road and West Madison.

With his ax cradled in his arm, staring through his shades into the crowd but not really seeing them, he looks somehow forbidding and unapproachable, merged with his songs on a higher realm. Possibly Jimmy Dawkins would have been "discovered" and recorded a long time ago if he would rely on trickery rather than artistry as do some of his contemporaries. However, Jimmy finds it impossible to jump around, lay on the floor and contort himself to get the audi-ence to listen to him. "Fast Fingers" has been a btuesman since grammar school days in Tchule, Mississippi.

It is the blues he feels and it's the blues he plays. He has appeared as a sideman on records made by other artists including Wild Child Butler, Koko Taylor, and Johnny Young. Delmark albums by Sleepy John Estes (Delmark 619), Carey Bell (Delmark 622) and Luther Allison (Delmark 625) feature Jimmy's stacatto style. He met Jimmy Rogers when he was still playing for Muddy and later played with Jimmy on the road for almost two years. But "Fast Fingers" has developed a grippingly beautiful style of his own. His technical ability cannot be disputed. Hell, just play this record once and dig his magnificent guitar work. But I am sure that after listening you will agree that he has something more than technical profi-ciency.

He has an extra dimension in his style and character that create in his listener's mind mood pictures. The blues is a verbal music but I for one used to listen to the blues tunes and only secon-darily to words. Jimmy Dawkins more
than anyone else I know got me listen-ing to the words. "Fast Fingers"' plain-tive voice and guitar evoke in me emotions which cannot be described on paper. I can only describe him as having soul in such abundance that it spills over into his music, his mannerisms, and his personality. It's not exactly the same type of soul of a wailing James Brown or of a rib joint on Kedzie Ave-nue, but something more nebulous and hauntingly beautiful. His voice pleads, his fingers answer with super-quick gui-tar riffs which complement each other beautifully. The synthesis of the two will catapult your mind to a plateau of new awareness.

Listen to this album and then decide for yourself if your life hasn't been enriched. This is not just another blues album but a blues experi-ence. It is a glimpse into the soul and character of a great blues man. —JOHN FISHEL, 1969 Program Director, Ann Arbor Blues Festival