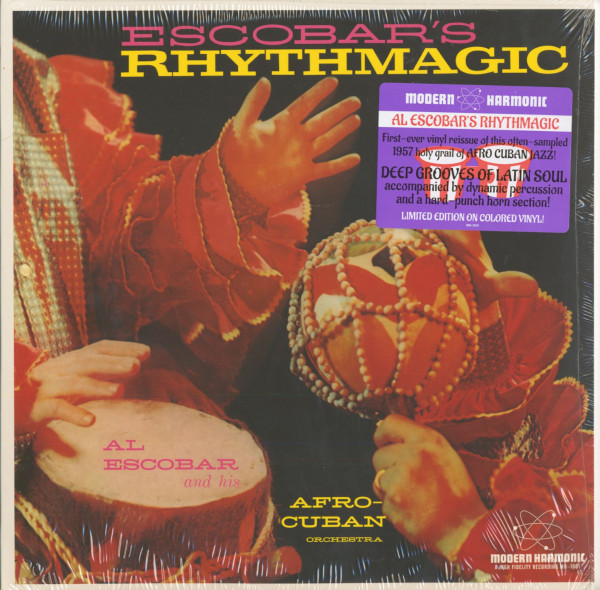 America in the 1950s was under the sway of Latin music in a big way. Mambo, merengue, “Babalú!” and more flowed from bandstands, record players, radios and television sets. Different styles began to merge, particularly the fiery hybrid known as Afro-Cuban. Heavily rhythmic and wildly melodic, its infectious sound filled dance floors across the nation. One of its leading proponents was Al Escobar, an ex-pat Columbian who apprenticed with Miguelito Valdes, Vicentico Valdes Tito Puente. Relocating from NYC to California, he formed his Afro-Cuban Orchestra and launched his solo career. Like fellow Latin pianist Esquivel, Escobar was an inventive arranger with an ear for deep hooks. His 1958 LP Rhythmagic is an explosion of percussion, piano, brass and woodwinds. In the decades since its release on Cadence Records, it has become a cult classic and highly sought-after by fans of Latin music, exotica and sample-grabbing DJs. Given that the LP has never been reissued, it should be no surprise that copies command gigante sums on the collector market, if you can find one at all. Never reissued until now, that is. Sundazed’s champion of the exotic and unusual, Modern Harmonic, has rescued Rhythmagic from oblivion and prepared a deluxe edition on colored vinyl! Sourced from the original Cadence analog masters, this LP is a fiesta of sound, ready to burst forth from your speakers.
Don’t miss your chance to grab this essential slice of Latin soul! On translucent gold vinyl!