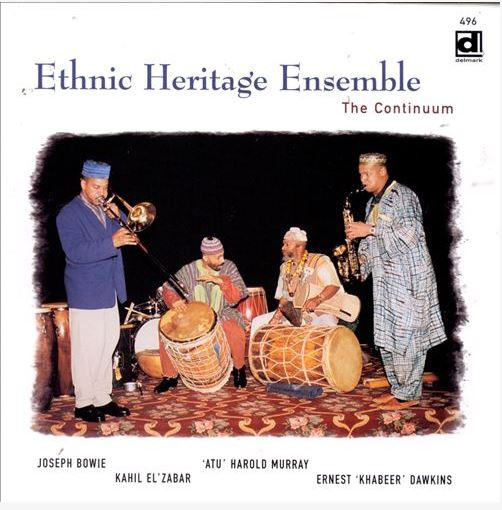 (1998/Delmark) 7 tracks, Here's another version of the Ethnic Heritage Ensemble, led by percussionist Kahil El'Zabar. Saxophonist and percussionist Ernest Dawkins is the new member, joining trombonist Joseph Bowie and percussionist Atu Harold Murray. While the material is jazz and avant in nature, there is also an underscored African presence, especially in the percussion. El'Zabar claims composer's credit on five of the seven selections. The two standards present are not surprising in the way they are approached -- 'All Blues,' which has been recorded by El'Zabar previously, is a mbira ostinato with trombone lead melody and alto sax counter, and 'Well, You Needn't' is a Yoruban groove with neat Afro-scatting on the bridge. El'Zabar's 'Ornette,' which was previously documented by his Ritual Trio, is light Afro-funk with cowbell, congas, and more scatting. 'The Chatham Dirge' features hand percussion and fluttery sax, and the title cut (which runs for 11:33, not 4:23 as listed) has ostinato tom-toms, lively repetitive alto, and counterpointed trombone. On the long, loping 'Ancestral Song,' mbira and chanting top a simmering sax and trombone undercurrent. The burner of the set is 'From Whence We Came,' a surging melody featuring Bowie's growling trombone solo and El'Zabar's hard swinging. All the intensity of the EHE is here, but it has a quieter sonority, allowing more subtle shades to rise to the surface. This version of the group needs to stay together and do more.(AllMusic)