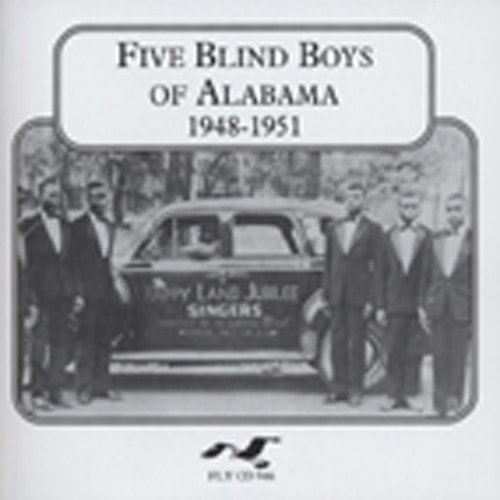 Group members: Clarence Fountain and The Reverend Samuel K. Lewis, leads,
George Scott, tenor: Olice Thomas, baritone,  Johnny Fields, bass.
It is often said that the blind have a special gift for music. It is also probable that many blind people experience religion a little more deeply than the rest of us, as the presence of God brings light into their darkness. It is only natural, then, that the Original Five Blind Boys of Alabama should sing Gospel music with peerless musical skill and incredible religious power. Their lead singers. Clarence Fountain and the Rev. Samuel K. Lewis, are famed everywhere for the force and freedom of their spiritual expression.

Their prayers and praise to the Lord can inspire all of us, cheering the sorrowful and refreshing the weary. Meanwhile, the grace and precision of the whole quintet will thrill every listener, while satisfying the most demanding musiclover. The Five Blind Boys began singing together while attending a school for the blind in Alabama. They soon became so popular in the area that they decided to stay together after graduation. A succession of tours spread their fame across the nation, and soon the Blind Boys were famous on records as well.