Orson Welles called her "the most exciting woman in the world." Singer, dancer, actress, writer, activist and icon, the world was Eartha Kitt's cultural playpen. Willfully exotic, a multilingual, genetically engineered sex-kitten with an IQ to match any Harvard cat, her international celebrity wasn't simply American fame exported overseas - like Elvis or Peggy Lee or Lena Horne. Eartha bathed herself in the cultures of the world - hobnobbed with Churchill, Nehru and Einstein - and emerged a star scented with far-flung trappings, who was at the same time, fundamentally, unmistakably American.

The public knew her as a glamorous star who in the 1950s and '60s, inhabited Broadway, movies, nightclubs and television with equal élan and ferocity (to a generation, her portrayal of Catwoman on the TV series 'Batman' cemented her legend), while recording novelty hits like Santa Baby and C'est si bon.

There were two Earthas come through in her dual persona: stylized purring for jewelry and mink in the preponderance of records that seemed to dwell on that topic, and her outspoken remarks against the Vietnam war that alienated enough of the establishment so that she had to head for Europe to ride out her career derailment. On this compelling CD - originally released in 1958 as the album 'St. Louis Blues,' with the trumpeter Shorty Rogers and his orchestra, Bear Family has captured a musical side of Kitt all too often overlooked - the soulful singer of formidable artistic versatility and heart.

It features selections from the Paramount movie, 'St. Louis Blues', about the life of W. C. Handy, in which Eartha starred with Nat Cole (as Handy), and an all-star African-American cast. The songs here are not all technically blues, though all are credited to Handy's authorship, and these are some of the most satisfying and artfully rendered cuts of Eartha's career. They show that even if grown over with the trappings of international glamour, the singer's southern roots always remained.

She was born Eartha Mae Keith, on January 17, 1927, in the small town of North, South Carolina - sharecropper country, amid what once had been cotton plantations. A childhood oppressed by soul-crushing, rural privation and abandonment gave way to adolescence in the cosmopolitan air of New York City (shuttled among relatives and friends). Her re-invention would begin early, as a member of Katherine Dunham's dance troupe. Orson Welles cast her on Broadway in his production of 'Dr. Faustus,' and her breakout performance came in the Broadway revue, 'New Faces Of 1952,' which Hollywood filmed two years later as the movie, 'New Faces.' She continued to acquire the polish of stage, nightclub, recording and movie stardom - her standout career film appearance being her role as the nightclub singer Gogo Germaine.

This CD shows Eartha refreshingly down-to-earth, as she insinuates her way around Hesitating Blues (originally popularized by Blossom Seely), Yellow Dog Blues (which Eartha sang in the movie) and Memphis Blues, Handy's first hit, and the first published blues to be documented (homage here, to Leonard Feather, who wrote this album's original liner notes). 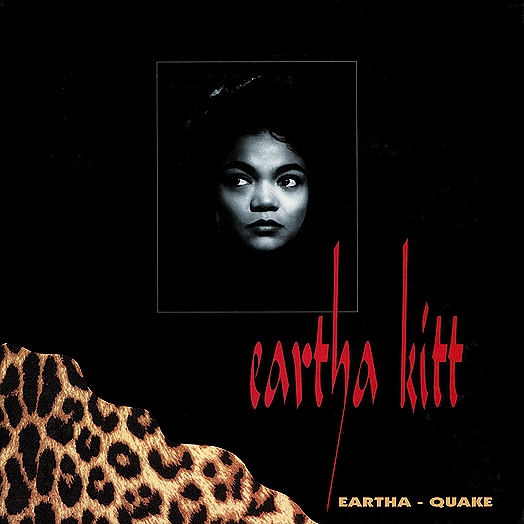 Her artistic cohort on this album is trumpeter Shorty Rogers, who was one of the leading creators of West Coast Jazz. Born Milton Michael Rajonsky in Great Barrington, Massachusetts in 1924, Rogers was an alumnus of Woody Herman's and Stan Kenton's bands, and had also worked early on with vibraphone pioneer Red Norvo. Based in Los Angeles, he performed with his own group (as Shorty Rogers and His Giants), and recorded a series of albums for RCA Victor and Atlantic. But he also became (perhaps best) known as a composer and arranger for numerous television shows, from 'Looney Tunes' and 'Mr. Magoo' to 'The Partridge Family;' and most significantly for the movies, where he helped bring jazz to the big screen in films like 'The Man With The Golden Arm' and 'The Wild One.'

Here, both the band, and the arrangements (mostly by Julian 'Matty' Matlock) are sublime. Eartha parries throughout with Rogers' trumpet and with a male vocal group on tracks like Beale Street Blues, St. Louis Blues and the sensational Long Gone (a true tale of a bank robber's daring escape from a Kentucky jail - Handy wrote the song with Chris Smith, who also wrote Ballin' The Jack). The two spirituals, Steal Away and Hist The Window, Noah, sung in the movie by Mahalia Jackson, are arranged here by Jester Hairston, and Eartha is backed by his spectacular gospel choir.

Blues or not, the result can only be described as joyful, from the first track to the last.