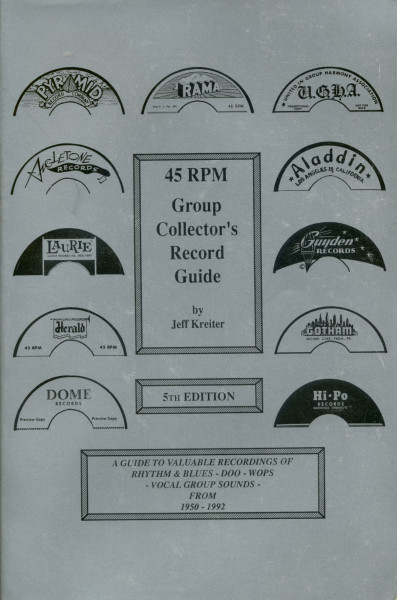 A Guide to Valuable Recordings of Rhythm & Blues, Doo-Wops and Vocal Group from 1950-1992

INTRODUCTION
how This book consists of a list of record labels, titles, and prices of Rhythm and Blues, Doo Wops, Female Vocal iiihkae. Groups, Single Artists-Group, White Pop Groups and a few Soul Groups from 1950 to January 1965 with only a few 1 records listed after 1965. Part Two of the book titled "Modern Vocal Group Records" lists records from 1970 to 1992 out that are mainly Doo-Wop and Rhythm and Blues. A gap exists between 1965 - 1970 because the vocal group reco how harmony sound virtually ended in 1965 and began again in 1970 as a result of a revival of the group sound. for All records listed in this book are 45rpm and by American Artists only. Some 78rpm's are listed only for the e purpose of identification for the collector. Some collectors were trying to locate certain records thinking they were on 45rpm but are on 78 only.

There are certain types of records which should not and will not be in this book; they are duets, vocal combos, will instrumentals, garage bands, foreign sounds, late soul after 1965, 78's, rockabilly, country, single artists with a '" chorus in the background, and hard core rock n roll that has very little group harmony. I've deleted 350 records. Some r si records have been deleted because they had a chorus in the background or were not vocal group sounds. Some records e were deleted and placed in part two of the book.

Many records probably should be deleted but I have not received any information on them. c Orr This book is a vocal group reference guide first, a price guide second. The primary purpose of this book is I to help collectors identify labels, first and second pressings, group names, years, discography of labels,and song can titles. The secondary purpose is to give a collector a fair market value of a certain record based on supply and demand, awn age, quality of the sound (whether a record is good or bad), and geographic location.

or All records are listed alphabetically by label. The first listing in the left hand column is the label name, an d€ by label number and a which indicates that a record is also on another label. If a b ( small letter B) is present from after the number this means the particular record was booted. The group name is next, then the year of release, type not of sound, song title, and dollar value. Some records will be marked with the following after the year: (B) black group, (W) white group, (M) mixed group, (G) girl group, (WP) white pop group, and (S) soul group. There are approximately 17,000 listings in the book of which 1,300 are in Part Two of the Book. There are five more sections at the end of Section One. Section Two is a index of group names listed alphabetically showing all labels a particular group recorded on.

Section Three lists by artists the 1st and 2nd labels that various records were pressed on. Section Four lists changes in various label numbers, colors and designs. Part Two-Section One lists modern group sounds from 1970-1992 alphabetically by label. Part Two-Section One will also list records that were only on 78rpm and then booted on a 45 after 1965, previously unissued records form the fifties, records done in a doo-wop or group harmony style by newly formed groups or the original groups, and records that were originally on one label and reissued after 1970 on another.

This section was included because some collectors were paying big money for reissue records or previously unissued records, and some new collectors were thinking that these new different labels were from the fifties and worth big bucks. Part Two-Section Two is an advertisement section showing record stores and places where you can purchase vocal group records. This book is not hard to use if you read this introduction over. Record listings are by label because most of the group collectors file their records by label. If you can't find a record listed in Part One-Section One then it will probably be in Part Two-Section One.