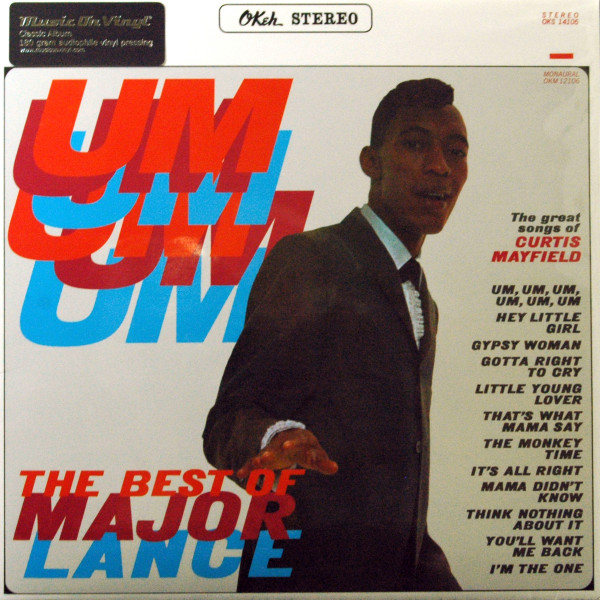 (2013/Music On Vinyl) 12 tracks 180g vinyl pressing. Major Lance was one of the leading Figures of Chicago Soul during the 60's and the top-selling artist for OKeh Records during the decade. During this time, the majority of his songs were written by his childhood friend Curtis Mayfield. Fittingly for Major Lance's smooth voice, Mayfield crafted urban, uptown and polished songs like 'The Monkey Time' and 'Um, Um, Um, Um, Um, Um'. Major Lance's mid-sixties output consists of some of the most popular good-time R&B of its era. The Impressions sing background on most of the tracks on Um, Um, Um, Um, Um, Um. First re-release of this timeless classic since its original release 1964!

With his old Wells High School pal Curtis Mayfield graciously handing him hit after hit and producer Carl Davis scoping out a new Chicago soul sound heavy on Latin-tinged rhythms, crackling percussion, and booming trombones, Major Lance was riding high in 1964. He'd scored his first smash for Columbia's OKeh subsidiary, The Monkey Time, during the summer of '63 (it's on the previous volume of 'Sweet Soul Music'), and followed it before year's end with another hit from Mayfield's fertile pen, Hey Little Girl; Curtis's vocal group, The Impressions, echoed Lance's ebullient tenor.

Cut at the same date as Hey Little Girl with Mayfield's guitar winding through the brassy backing, Um, Um, Um, Um, Um, Um launched 1964 for Lance in style. "It really wasn't a song that Curtis had written as the kind of song it ended up being," says Davis. "It was like it went off into space somewhere. It didn't have an ending. It was like Greek mythology, when the guy dived off the boat 'cause he heard some voice calling. That's the way the song was originally conceived.

"I went to Curtis and said, 'Man, listen. This is a great song, but you've got to change it around so that we end up talking about a girl.' In those days, love songs were what was going on if it wasn't a dance tune. That was during the time Curtis had begun to do a lot of message songs. I don't know what kind of message it was, but I was fortunate to get him to change those lyrics!" Fortunate indeed: Um, Um, Um, Um, Um, Um leaped to #5 pop, Major's biggest seller on that front, while a British cover version by Wayne Fontana & the Mindbenders reached #5 across the water.

Lance's winning streak continued with The Matador, Rhythm, Sometimes I Wonder, Come See, and Ain't It A Shame. But when Davis was forced out of his OKeh A&R post towards the end of 1965, Major was shuttled down to Nashville to work with Billy Sherrill. It's The Beat made some noise for Lance in '66, but soon he was back recording with Davis at his new Dakar label and enjoying a '69 hit with Follow The Leader. There was also a solid seller the next year for Mayfield's Curtom logo, Stay Away From Me (I Love You Too Much). Lance endured tough times aplenty prior to his September 3, 1994 death in Decatur, Georgia. "If you met him, automatically you knew that he was kind of special," says Carl. "You didn't know quite why he was special until later on. But he was always a special kind of person."