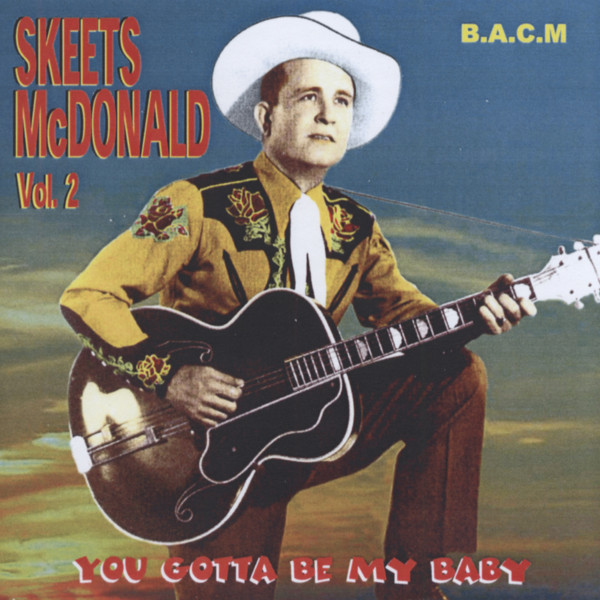 Skeets McDonald: You Gotta Be My Baby, Vol.2 (CD)

DON'T LET THE STARS GET IN YOUR EYES 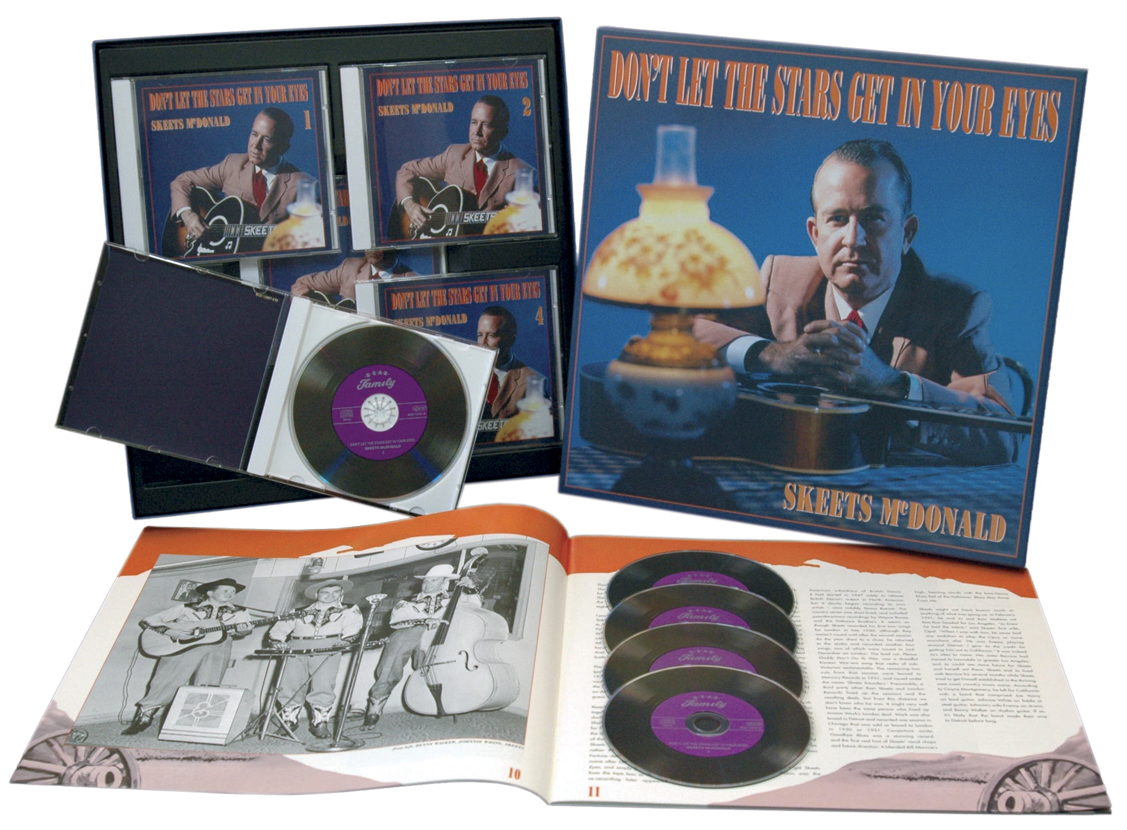 Entire volumes are still being written about poets, dramatists, philosophers, and political figures who died centuries ago, yet very little is known about Skeets McDonald, a country singer of renown who died just thirty years ago. In its way, that says much about what was considered worthy of documentation in the very recent past. It's true that Skeets was not one of the major stars of the Fifties and Sixties, but he scored two big hits, Don't Let The Stars Get In Your Eyes in 1952, and Call Me Mr. Brown in 1963. He was on television in Los Angeles every week for years, worked as a sessionman, and played clubs all across the West and Southwest--and points beyond. When he went into the studio, he recorded some of the very best beerhall country music ever to find its way onto disc. He even cut a rock 'n' roll record that earned him a posthumous, if not particularly well-deserved, reputation as a rockabilly singer.

If he were alive, Skeets might well have welcomed any attention from any quarter, even rockabilly fans. He fell into the void between the total nonentities and the stars who seemed to hog what coverage there was. There were a few short pieces in the country fanzines in the early Fifties, and then little or nothing until brief death notices fifteen years later. For some reason, EMI's British budget label, Music For Pleasure, reissued his sole Capitol album, 'Goin' Steady With The Blues', in the mid-Sixties, thinking it was a blues album. Nick Tosches made Skeets one of his 'Unsung Heroes Of Rock 'n' Roll'; there were two Bear Family LPs in 1986; and one of Skeets' songs was used as a recurring motif in a bizarre British television series. Besides that, nothing.

Family history has it that the McDonalds originally settled in South Carolina, and went from there to Alabama and on to Arkansas. What we know of Skeets' early life derives almost entirely from Charles Wolfe's interviews with Skeets' younger brother, Lynn, who has since died. Wolfe's text, published in the liner notes to Bear Family's 'Don't Let The Stars Get In Your Eyes' LP, recaps what little is known of Skeets' earliest years. 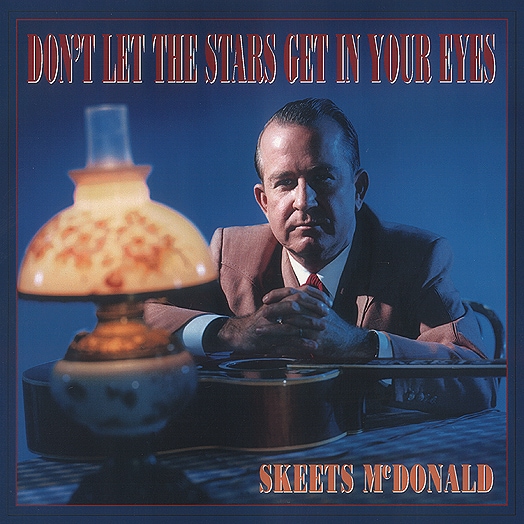 Greenway, Arkansas is a small town nestled into the extreme northeastern corner of the state, next to the Missouri bootheel. Eighty miles to the west is West Plains, Missouri, birthplace of Porter Wagoner; eighty miles to the southeast is Memphis, birthplace of the blues. It is an interesting musical climate and it was the home turf of Skeets McDonald. Born October 1, 1915 as Enos William McDonald, into a cotton picking family of three brothers and three sisters, Skeets grew up on his father's farm in a little hamlet called Rector. Early on, he acquired the nickname that would stick with throughout his life. “We raised cotton down there,” brother Lynn McDonald recalled, “and he was the baby in the family, but he always wanted to go out with us. There was one day when we were out hoeing twenty acres of cotton, and he wanted to come and help. We said that it was too hot and that the cotton was too tall--it was about as tall as he was. But he insisted, so we took him. Well, the mosquitoes were really bad that day, and they started getting after him. After a bit of this, he shouted, 'I go home. Skeets bite.' My brother-in-law was with us. He got a kick out of this, and he started calling him 'Skeets.' Skeets didn't like the name at all, didn't like to be called that, but it stuck, and after a while he couldn't do much about it. It was Skeets McDonald."

Though none of his immediate family was a notable musician, Skeets learned traditional Ozark music at the local music parties that still characterize grass roots Ozark music. The older generation of pickers that Skeets listened to included mandolin player Charlie Dodd, and guitarists Carol Hasty and Scott Bradford. By the time he was five, Skeets had a home-made cigarbox fiddle, and was trying to saw out the fiddle tunes he heard from the area's pre-eminent fiddler, Elvin Burns. In later life, Skeets would often call a set of square dancing on a stage show in California or Texas, drawing on the skills honed with Burns and other fiddlers.

The family also had a Victrola, and through this Skeets heard his first singing influence, Jimmie Rodgers, whose popularity peaked when Skeets was thirteen. A well-worn family story recounts Skeets at age twelve getting his first guitar. “He traded a red hound dog for a guitar and six dollars,” recalled Lynn. “And a farm boy became a musician. In the evenings, he would sit for hours, picking guitar and singing.” In between, there were hard chores to do, especially when the Depression hit and money in rural Arkansas was almost non-existent. Still, there were music parties, coon dogs and hunting trips, good fishing, and good friends. “It was a great and happy life,” Skeets reflected in later years.

Like many young Southerners during the Depression, Skeets' older brother, Steve, went north to Michigan to work in the auto factories, and in 1933, when Skeets was eighteen, Steve returned for a visit. He brought news of an entire transplanted 'cracker' culture in Michigan, where so many southerners had moved up that the bars and roadhouses and radio stations around Detroit were filled with the sounds of stringband music. Though Steve was not a musician himself, he had contacts in a band led by the Buffington Brothers called the Lonesome Cowboys. When he heard how good his little brother had gotten on the guitar and how well he could sing the old songs, he invited Skeets to return with him, promising to get him a job. Skeets went and had no trouble fitting into the band, [thus] beginning a career that would last until his death in 1968. 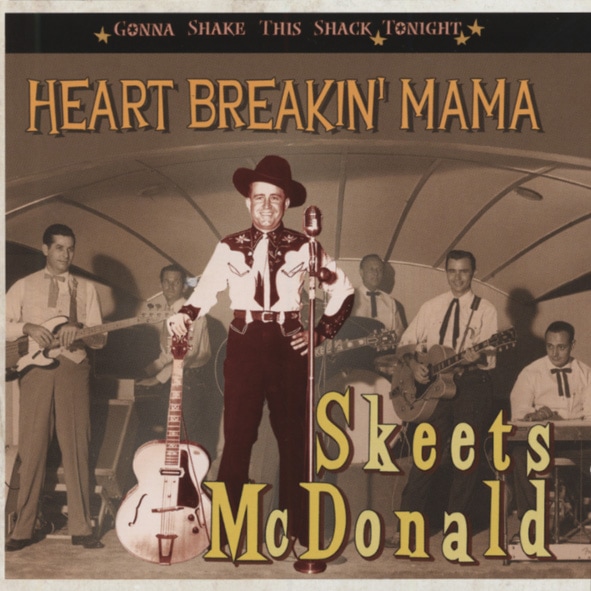 Skeets left Greenway High School in 1932, and went first to St. Louis, working on KMOX with an artist remembered only as Pappy Chasire (or possibly Cheshire). He probably arrived in Detroit in 1935 or 1936. After leaving Ive and Clayton Buffington, he led several of his own bands, and by 1936, he was on WEXL in Royal Oak, about half-way between Pontiac and Detroit. Skeets couldn't yet make a full-time living from music, so he held down a day job, played the radio station early in the morning, and worked the beerjoints on weekends.

The Treeces were from Missouri, and one Sunday afternoon Mr. Treece took his daughter, Opal, to hear some music from back home. Skeets began flirting with Opal, and bought her a chicken dinner. Opal was going to high school at the time, and Skeets was working in the press room at the Fisher body plant (the same place Johnny Cash worked some 15 years later). Skeets got off work around the time that Opal got out of high school, so he'd walk her home. In the morning, he'd dedicate songs to her over the radio.

Skeets and Opal were married soon after she graduated from high school in 1936. Their son, Robert Lee, was born in 1938. Then, when Robert was eleven months old, Opal left. “I kept forgiving him and forgiving him,” she said. “I couldn't endure him living that life. He was a very likeable guy, and he was idolized by a lot of women, and you can only take so much. It was just his weaknesses and his way of life.” Skeets was ordered to pay five dollars a week in alimony, but the payments soon dried up, and he never publicly acknowledged that he had a son or first wife. In 1942, Opal married a real estate broker. Robert went on to graduate from the U.S Naval Academy in 1962 and was in the Army until 1968. Since then he has worked as an engineer. Skeets went on doing the only thing he knew to do.

Skeets' parents, Sam and Ethel, divorced in Arkansas and moved separately to Pontiac in the late years of the Depression to join Skeets, Steve, and their younger brother, Lynn. One of Skeets' sisters, Gertie, taught school in Arkansas for 40 years; another, Ida, was a practical nurse in Arkansas; the third, Lela, married a man named Floyd Harber and moved to St. Louis (which might have provided Skeets with the impetus to move there before venturing on to Detroit). Ethel had a steady job for years at the state hospital in Pontiac; Sam was a caretaker in an apartment building. They both retired separately back to Arkansas after the war. Skeets' two older brothers remained in the Detroit area. Steve ran his own car repair shop in Pontiac until his death in 1944. Lynn worked as a ward supervisor at a psychiatric hospital.

The personnel of Skeets' early groups is hard to establish, probably because it changed constantly, and sixty years on, it's almost impossible to pin down his itinerary. Apparently, he brought up several buddies from Rector, including a blind accordionist, Junior Waddington, with whom he worked at the Parkview Lounge. Two brothers from Rector, lead guitarist Shug Daugherty and steel guitarist Durwood Daugherty, backed him at Larson's Night Club. Another of Skeets' friends from Rector, pianist Les Thomas, worked with him at the Scenic Inn. He held down regular spots on WFDF in Flint, Michigan, and on WCAR in Pontiac at various points before the Second World War. One of Skeets' longtime fans, Cloyce Montgomery, remembered that he had a policy of going from table to table between sets to greet the fans; then, when he moved on to another location, his fan base would follow him. According to Fred Lagg's unpublished remembrance of Skeets lodged with the Country Music Foundation, “Old-timers around Detroit will tell you about the time he worked a job on Seven Mile Road, and was such a success that the owner had to enlarge the building to make room for more customers.”

The United States entered the Second World War in 1941, and Skeets joined the Medical 69th General Hospital on April 4, 1943, operating in North Africa, India, and Okinawa. He came home on January 21, 1946 with a Bronze Star.