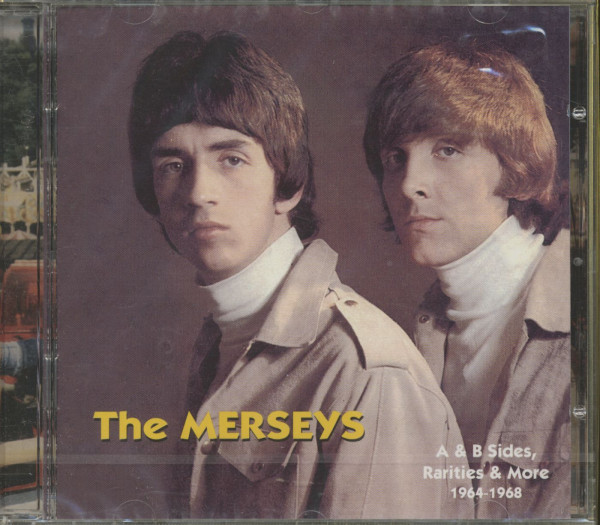 (2004/OXFORD) 28 tracks - including recordings by The Crackers, The Kirbys, The John Gus Set, Johnny & John, The Quotations and Johnny Gustafson. With 8 page booklet.
-
The Merseys had a big pop-rock hit in the UK in 1966 with 'Sorrow', later covered by David Bowie (on Pinups), but never followed up on the promise of this successful debut. They were a spinoff group from the Merseybeats, who vere one of the more popular Liverpool bands of the British Invasion, although they never managed to land a hit in the United States. The Merseybeats split up n 1966, with lead guitarist Tony Crane (born 1 7. April 1946, Liverpool) and assist Billy Kinsley (born 28. November 1947, Liverpool) forming the Merseys. .Unlike the Merseybeats, a self~contained quartet, the Merseys were a duo, backed onstage by the Fruit Eating Bears, who had two drummers and featured Ioey Molland (later of Badfinger) as lead guitarist. The Merseys were managed by 'The Who' managers Kit Lambert and Chris Stamp, which seemed a solid indicator at future growth, although Kinsley has said Lambert and Stamp naturally focused nuch more of their attention on 'The Who'.