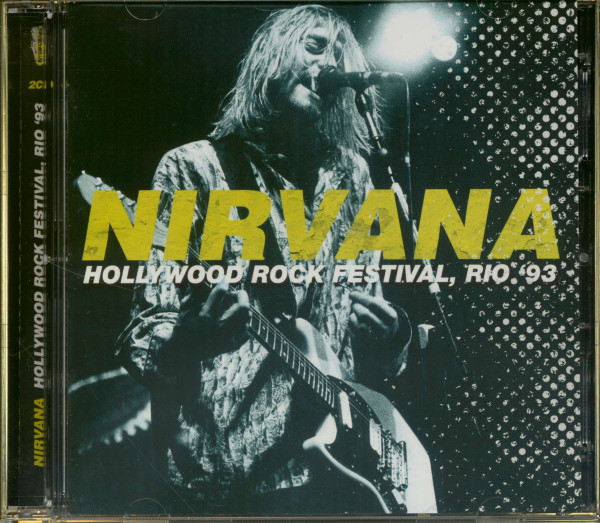 He sounds distant, ghostly, and looks unsettlingly strange. Sitting at the head of a huge conference table in New York's Omni Berkshire hotel, the top of Nirvana singer Kurt Cobain's dangerously thin frame is wrapped in a rib-huggingly tight pink nylon shirt. His pale blue eyes - pinprick pupils dancing paranoically from left to right - are heavily, sluttishly made up. His mouth, bearing the remnants of scarlet lipstick, seems both vulgar and sensual. The beard doesn't help much. Kurt's fingernails, painted crimson, are chewed down to neurotic cuticles. "My A&R man called me up one night and said, I don't like the record, it sounds like crap, there's way too much effect on the drums, you can't hear the vocals. He didn't think the songwriting was up to par." Cobain is talking about Nirvana's new album, In Utero, released by DGC in September. "A few other people - our management, our lawyers - didn't like the record either."

In Utero, originally titled I Hate Myself And I Want To Die, generated controversy almost before it was even written. Many in the music industry convinced themselves that the pressure to follow up Nevermind, coupled with Cobain's alleged drug problems and the (supposedly) even more pernicious influence of his wife, Hole singer Courtney Love, had left him creatively void. Given this, pop pundits speculated that In Utero would be a petulant punk cop-out, an album designed to excuse its lack of sales, an album that would lose them their fanbase as quickly as Nevermind had gained it. Earlier this year, In Utero producer Steve Albini claimed that DGC Records wouldn't release the album because it wasn't "commercially viable." Cobain's revelation that insiders hated the new album seems to lend this charge credence.

"No, no," says Cobain, wearily. "Basically Albini heard from me about a week after we got back from recording that my A&R man said he didn't like the record. But it never went beyond that, just these people expressing their opinion. Obviously, though they never said it, they wanted us to re-record, or at least to remix, but at that time I couldn't really say much to anyone because I wasn't sure what I wanted to change on the album."

More important than what anyone else thought, Kurt says, was his own dissatisfaction with In Utero. "The first time I played it at home, I knew there was something wrong, he reveals. "The whole first week I wasn't really interested in listening to it at all, and that usually doesn't happen. I got no emotion from it, I was just numb. So, for three weeks Kris, Dave and I listened to the record every night, trying to figure out what was wrong, and we decided the vocals weren't loud enough, the bass was inaudible and you couldn't hear the lyrics." The band hired R.E.M. producer Scott Litt to remix Heart-Shaped Box and All Apologies, their favorite songs. "Just as a litmus test," Cobain says. "To remix any more would've destroyed the ambience the whole thing." In the mastering plant Nirvana boosted the bass and vocals on the other tracks. "As soon as we'd done that, we knew we'd made the right decision, it was over."

and melodic. Some songs, notably Rape Me, Serve The Servants and Dumb, each of them simple, compelling and extraordinarily mellifluous, would sound as effective framed by the delicate timbre of an acoustic guitar as they are electrified. On the album's final track, All Apologies, the warm tones of a cello are even audible. Of course, as with Nevermind, there are out-and-out punk songs. Some are very effective, like the primal Scentless Apprentice; others are not much more than a (rather dull) blast of bile, like Very Ape and Tourette's. Still, nothing sounds `commercially unviable'. Was there ever a temptation to record something more contentious? "Not so much," Kurt says. "Obviously there was a lot of pressure on us to come up with Nevermind II. But I can't consider that pressure; it was just what a lot of people expected. The only reason I would've deliberately put out a really aggressive, raw album would have been to piss people off, to get rid of half our audience and more."

In Utero is not a difficult album. If anything, Cobain's songwriting is moving towards the more reflective Kurt elaborates on his attraction with repelling Nirvana's swelling legions: "At the time we weren't comfortable with our audience," he says, adding that he's okay now. "But it took me two years to recuperate from that." Following the success of Nevermind, Nirvana spent unhealthy amounts of time deriding their new audience, dismissing them as jock meatheads. At the time, it struck many as ungrateful and, more to the point, actually seemed to miss the point. Surely one of the great things about Nirvana was that they recorded an indie album that went mainstream and, in doing so, proved that the great record-buying public, far from being congenitally conservative, were in fact open to new ideas.

"The point we were trying to get across was never stated in the right way," Kurt defends himself. "I was upset about finding myself having to play in front of really rude, sexist jerks. It's all very well saying, `Well, you signed to a major, so you should expect that'. But we'd seen Sonic Youth put out an album on the same label, and they'd barely got a larger audience. They were playing the same clubs, the same smaller venues, and we thought it'd be the same for us. I think it was a matter of us not realizing how commercial we really were."

And continue to be. Even lyrically, In Utero is neither as direct or brutal as Cobain threatened. "After all the shit I've had to read about me, and especially my wife, in the last year and-a-half, I should've put out a really hateful record," Kurt says. "I should've used every chance I had to attack people. I wanted to, I feel that strongly about it, but there's just no point. I'm already known as a crybaby whiner. Yeah, I did take a few shots at the media and some of the other things that've happened to us. But, for the most part, I made sure not to complain. I really tried not to."

So why, on Heart-Shaped Box, does the chorus go "Hey, wait, I've got a new complaint"? "That's just me giving an example of how I'm perceived," Kurt retorts, implying that Cobain the whining anarchist millionaire is a media fabrication. "I've become a lot more optimistic about everything," he says. "Having a wife and child can obviously change your perspective on things. Two years ago I never thought about the future, not at all. But now I have this huge responsibility to
my family, and it's probably more pressure than I've ever had dealing with this band. In the last year and half, even before we found out Courtney was pregnant, I've started to evolve a little bit from being a completely negative bastard, pretending to be punk rock, and hating the world"
- Circus, November 1993