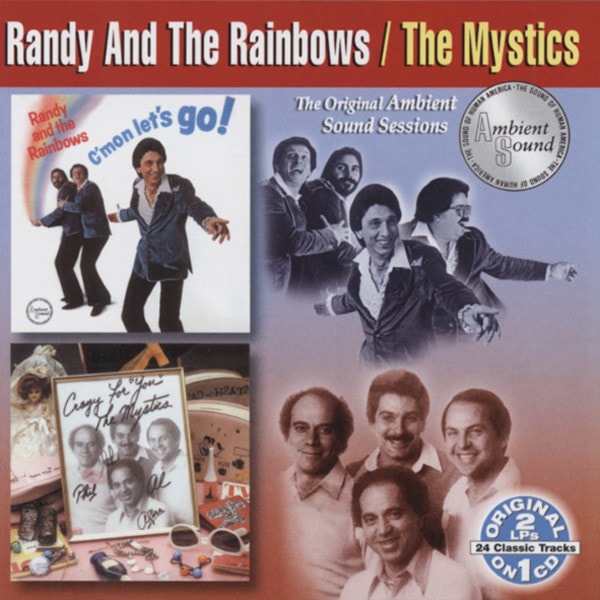 Randy And The Rainbows / Mystics: C'mon Let's Go (Randy) & Crazy For You (Mysti

Classically trained pianist Neil Levenson met Paul Anka at a Catskill Mountains resort and was inspired to write a pop song that he initially called Pretty Girl. He changed its title to Denise after meeting a girl by that name at the beach. Neil told The Tokens, whose The Lion Sleeps Tonight topped the pop hit parade in 1961, about his creation. They'd formed their own Bright Tunes Productions, and they urged Neil to find a group to sing Denise.

Hailing from the Maspeth community of Queens in New York City, the teens he recruited were fronted by Dominick Safuto, with his brother Frank on first tenor (they'd been in The Dialtones, who made a 1960 single for George Goldner's Goldisc logo), second tenor Sal Zero and his brother Mike on baritone, and bass Ken Arcipowski. They were known as The Encores before Frank joined, when they changed their handle to Junior and The Counts.

Recording at New York's Allegro Sound with The Tokens producing, the newcomers waxed Denise and its flip Come Back, another Levenson composition. Laurie Records would issue the single on its Rust subsidiary, but owners Bob and Gene Schwartz didn't like the group's name so they changed it to Randy and The Rainbows. Denise became a #10 pop seller that summer and even made a #18 R&B showing.

Levenson's Why Do Kids Grow Up rode the same marching beat as Denise as the group's Rust encore, but it made a mere pop blip at year's end as President John F. Kennedy's assassination cast a pall over the nation. Their Rust followups Happy Teenager, Little Star (a revival of The Elegants' '58 smash), and Little Hot Rod Susie missed entirely. A mid-'60s move to the Mike label for three singles didn't restore their momentum, nor did a platter on The Tokens' B.T. Puppy logo. Sal and Ken split after that. Randy and The Rainbows made a comeback in the early '80s on Marty Pekar's doo-wop-obsessed Ambient Sound label (they then consisted of Dom, Frank, Mike, and Vinny Carella). Arcipowski passed away March 23, 2011.