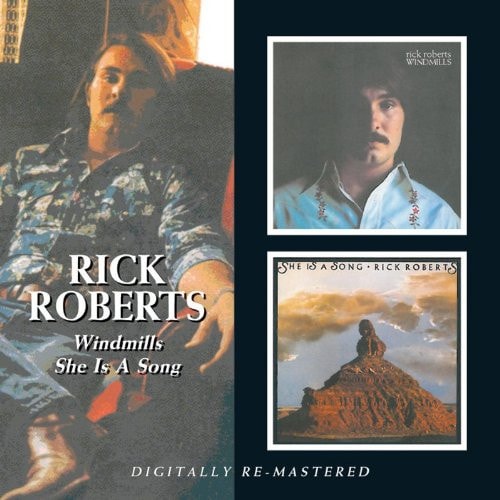 ROBERTS, Rick: Windmills - She Is a Song

(2009/BGO) 19 tracks.
Digitally remastered two-fer from the American singer/songwriter, recorded between his stints with the Flying Burrito Brothers (he replaced Gram Parsons) and Firefall: Windmills (1972) and She Is a Song (1973). the latter album was produced by former Burrito Brother Chris Hillman. After these two solo albums, Roberts formed Firefall and finally achieved the success he so richly deserved.

Artikeleigenschaften von ROBERTS, Rick: Windmills - She Is a Song

Glad To Be Goin'

It was time for Rick Roberts' second solo album, but, unable to quite let the past alone, he toured Europe in February 1973 with the Hot Burrito Revue, mostly comprising the group that became Country Gazette. His second LP, 'She Is A Song,' came in December, shortly before he launched Firefall. With Firefall, country rock officially became soft rock. It's almost there on this album. Everything about this LP is as immaculate as it is unmemorable. Guys from Poco came along, and so did Joe Walsh, who'd quit the James Gang and was leading Barnstorm prior to joining the Eagles. Some of Walsh's session guys from his 1973 album, 'The Smoker You Drink…,' were here, including Joe Lala and Joe Vitale. Excellent musicians all of them. But how could country rock, which had started so anarchically five years earlier, have become reduced to these slick equations?