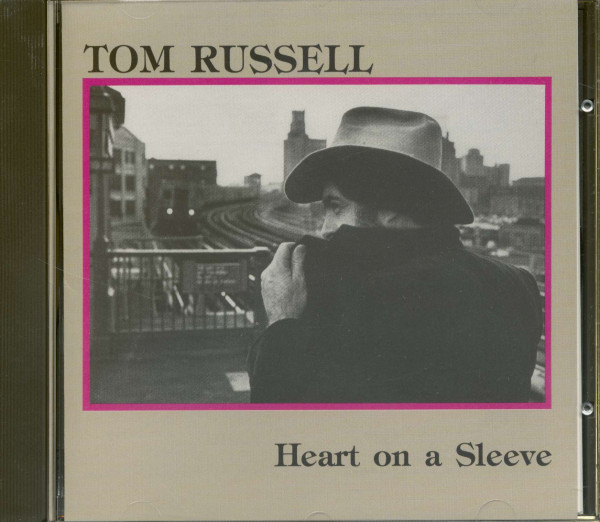 RUSSELL, Tom: Heart On A Sleeve

Lonely nights and chicken fights »Gallo de Cielo«, »Mandarin Oranges«, and »Cropduster«, were recorded in San Francisco in 1979-80 in a basement studio on the south side of town. I've cut the song several times but this is the original version recorded a few weeks after I wrote it in a garage in Mountain View. Brian Fitzpatrick plays the Grady Martin-inspired Mexican guitar, a guy named »Steve« wandered in and played accordion, and carpenter-musician Don Graham is on drums. Mayne Smith, who was on the classic Jim Kweskin, »America« album, plays dobro on «Mandarin Oranges«, and Michael »armed and crazy« Weinstein played bass and helped produce. Last I heard Michael had hocked his .357 magnum and joined the Israeli army.

My old songwriting compadre Carl Brouse played the Tennessee Hi-string guitar on »Cropduster«. Carl has since recorded AMERICAN HOTEL on DTI records. Carl teils stories of a penniless songwriter named Stephen Foster falling out of bed onto a pile of empty whiskey bottles and bleeding to death. With that in mind Carl once picked up my souvenir bottle of »Elvis Presley« German white wine and told me that when I'm desperate enough to pop the cork my »big song« lies waiting at the bottom. I'm getting thirsty, amigo. »Canadian Whiskey« and »Chinese Silver« were recorded in Oslo, Norway in the Spring of 1982 thanks to the finäncial assistance of a Scottish gentleman I know onlyas George. George is an oil rig inspector who commutes to the North African desert from Oslo.

The infamous banjo-playing recanteur Richie Bull played and helped produce the session. Richie, Andy Hardin and I played seven nights a week in an Oslo beer cellar then ran down Karl Johans Gate trying to sober up for the all-night sessions. I heard that Richie Bull left Norway and operates a skin diving school in a village in England ... one hundred miles away from any known body of water. »St. Olav's Gate« and »Heart On A Sleeve« were written in Norway and recorded later in New York. »St. Olav's Gate« was written in the old »Munch's Gate Arms« and »Heart On A Sleeve« in a renovated monastery near the Edvard Munch Museum. These two and the remainder of side one were recorded in New York — beneath the shadows of the 59th Street Bridge. »St. Olav's Gate« is dedicated to Louis Am brose Larson, born in Bergen in 1847. T

he earlier New York tracks were co-produced by Gene Hicks, last seen playing the studios, streets and subways of Oslo. Buddy Gage, who has played and recorded with the likes of Lefty Frizzell, Bob Dylan, lan Tyson, and the New Riders of Purple Sage, played steel guitar on several tracks. Bill Kirchen, of Commander Cody, was driven out of bed one morning and plyed with eight cups of truckstop coffee to play lead guitar on the title track. Paul Pearcy of Austin, Texas contributes drum tracks and the haunting voice on New York's Shawn Colvin can be heard on »One And One« and mang of the backup harmonies.

Two of the mainstays throught a thousand honkytonk nights are bass player Billy Troiani, veteran of ten road years with blues singer Eddie Kirkland, and Andrew Hardin, who not only co-produced but played acoustic and electric guitars, tiple, bass, percussion, and sang harmonies. They deserve their rightful spots in Honkytonk Heaven. Final thanks to believers like Jimmy Cullen, country singer Harold Lamm, and my old friend Bill Chambliss. We shall all meet on the Mexican desert for one last Fandango This album is dedicated to my daughters Jessica and Shannon.
Tom Russell, New York 1984 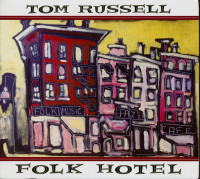 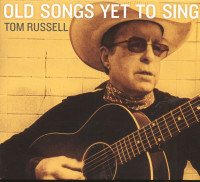