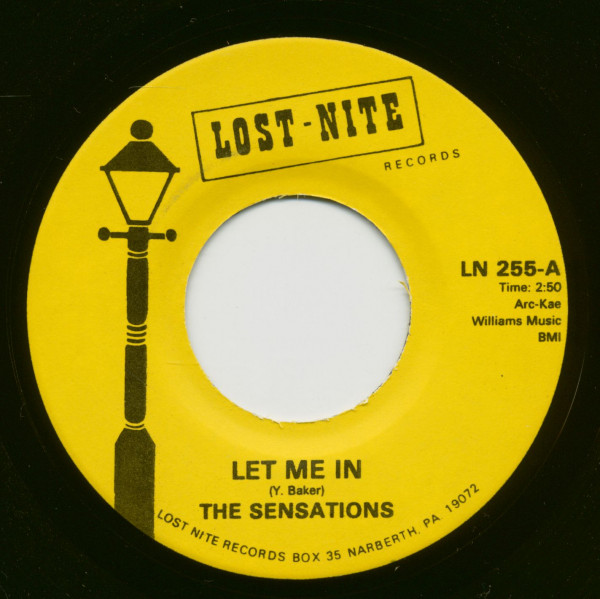 The discography of The Sensations can be divided into two distinct parts. Lead singer Yvonne Mills quit the business for awhile in 1958 to start a family with her husband, who had worked as her group's road manager. But when she came back to the group in 1961 as Yvonne Baker, they enjoyed more success than ever.

Showcasing a female lead singer with an otherwise all-male group was rare when the Philadelphia quartet first surfaced. Known as The Cavaliers, they were rounded out by tenor Roosevelt Simmons, baritone Tommy Wicks (Yvonne's then-boyfriend), and bass Alphonso Howell, born September 4, 1936 in Philly. Deejay Kae Williams was their manager. They were one of the first signings to Atlantic's new Atco imprint in July of 1955. Simmons and Wicks planned to lead most of the songs at The Cavaliers' first session, but after listening to everything they had, Atlantic's braintrust directed them to place Yvonne in the spotlight. Howell dreamed up the name of The Sensations because The Cavaliers didn't fit a group led by a female.

The Sensations debuted with a sultry remake of Gene Austin's ancient pop charmer Yes Sir That's My Baby, which made a #15 showing on 'Billboard's' R&B 'Best Seller' list in early '56. Yvonne Mills, as she was then known, got featured billing on The Sensations' next hit that spring, Please Mr. Disc Jockey (which made it to #13 on the R&B 'Jockey' listings), and their subsequent Atco output. Four more singles brought The Sensations into 1958 before she took a hiatus to care for her baby.

Alphonso convinced Yvonne to make a comeback in 1961, bringing in tenor Richard Curtain and baritone Sam Armstrong to complete the new lineup. They were still with Williams, whose Junior label had introduced The Silhouettes' Get A Job to the world. The Sensations' comeback offering, a bouncy update of Teresa Brewer's chirpy 1950 pop smash Music, Music, Music, came out on Chess' Argo imprint. It proved a #12 R&B/#54 pop seller during the late summer of '61.

Yvonne knew her own style best. She wrote the joyous Let Me In, full of happy "whee-oos" and riding a stomping beat. It took off in late '61, stopping at #4 pop and #2 R&B early the next year (its Argo ballad flip Oh Yes I'll Be True was written by her sister, Ernestine Eady, who would later record for Phil-L.A. of Soul). A remake of Frankie Laine's old torch number That's My Desire was The Sensations' last charter, making a #69 pop impact in the spring of '62, though the group bounced between Argo and Junior into 1964. Howell died May 7, 1998.