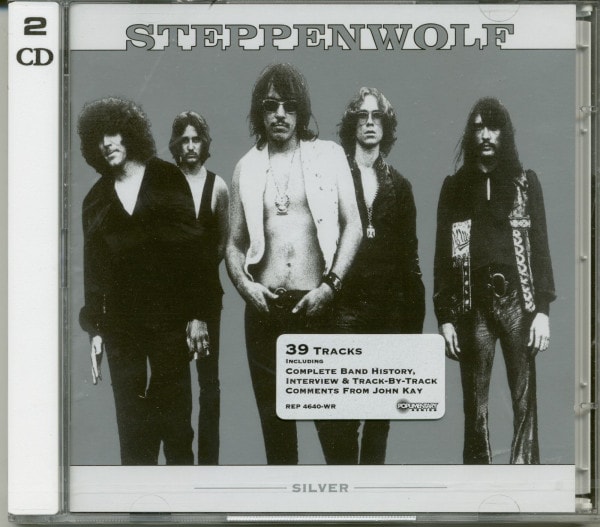 Steppenwolf's fifth album, 'Monster,' was harshly critical of the first year of the Nixon administration. When it was released in 1969, the band, whose name was inspired by a Herman Hesse novel, was already a major musical force with two gold albums and three Top 10 singles to its credit

The founder/leader of Steppenwolf was John Kay, who also handled the group's vocals. He was joined by Michael Monarch (guitar), Rushton Moreve (bass), Jerry Edmonton (drums) and Goldy McJohn (keyboards). Their first eponymous album included Born To Be Wild, a song that is enshrined in both the Rock and Roll and Grammy Halls of Fame, as well as Hoyt Axton's [see Disc 11] The Pusher. Both numbers were prominently featured on the 'Easy Rider' soundtrack.

'Monster's' title track depicts America as "a monster on the loose" whose leaders "don't pay it no mind." It refers to the fighting in Vietnam as "a war over there…no matter who's the winner we can't pay the cost." Draft Resister commends the men "who refuse to follow traitors to humanity," and harks back to Dylan's Masters Of War in the couplet, "Heed the threat and awesome power of the mighty Pentagon/Which is wasting precious millions on the toys of Washington."

Various incarnation of Steppenwolf continued playing and recording heavy metal music through the mid-'70s. Kay, with a new backing band, charted an album in 1987. The group now awaits a call from the Rock and Roll Hall of Fame.